Some of them are walking dead, but old rigs aren’t coming back to get us.

One of the hottest issues in the offshore rig market is rig competitiveness.  You see it in investor presentations as a key point to support companies with fleets of newer rigs, and most rig utilization tables filter out to some degree rigs that, according to the creators of these tables, just don’t matter to the supply side anymore.

We also apply reasoning that differentiates competitive supply from total supply to get a more realistic picture of utilization.  And, as we pointed out in an article several months ago, the argument that old rigs (and poorly maintained new ones) make oversupply a moot point is valid to a large extent.

You can reasonably assume (as most owners of newer, high spec fleets do) that a significant number of the rigs in the offshore fleet are uncompetitive and destined to leave the market as they experience waning demand compared to new, well-maintained rigs and dayrates remain too low to justify capital-intensive upgrade projects.

We estimate this number to be nearly 340 rigs.  If you take into account many of the newer UDW drillships which have been cold stacked for years now, the number could go up even higher.

While we’d like to see an acceleration in the rate of attrition, we’re confident that the trend of new rigs taking more demand from old rigs will continue.

Oversupply isn’t nearly as bad as it seems

All rig segments started experiencing “age-bifurcation” years ago.  In 2013–2014, demand for new jackups continued to rise as demand for old rigs fell.  This phenomenon wasn’t as pronounced in the semisub and drillship segments, but a decline in old-rig utilization happened (and is still happening) there too.

So even before the downturn, old rigs were on their way out.  Once the downturn hit, many of them became zombie rigs as owners focused their resources on the better assets in their fleet (if they had any) or just stuck their heads in the sand and hoped the market would come back before it was too late to bring these assets out of some sort of suspended animation.

Now, the market is saturated with zombie rigs.  Some of these are more obvious than others – for example, those that have questionable ownership (either taken over by a financial institution, a sovereign court system, or abandoned by their owners) or have been cold stacked so long that even the best engineers wouldn’t put someone else’s money into reactivating them.  But other rigs have quietly, inconspicuously passed on into another (undead, unalive) dimension without the market being completely aware of it.  Sometimes even their owners don’t know it’s happened.

Nobody knows exactly how many uncompetitive rigs exist.  And as time goes by, more and more rigs will transform into assets without a future.  Stacking costs are low enough to hide in most P&L statements, and reactivation costs can evade budgets until a company actually decides it’s going to attempt to put the rig back to work – which doesn’t happen too often.

Sometimes their owners suddenly announce that one or more of these rigs will be retired.  Owners like Transocean, Diamond, and Noble have been good at this.  Other owners have hesitated to swing the ax of attrition, but it doesn’t matter.  At least for now, most old rigs don’t count toward competitive supply.

So competitive supply, while still too high for dayrates to start rising, isn’t really that high.  As the market improves, as the oil price continues to break through recent highs, and as onshore/shale production efficiency falls, offshore drilling rig demand will eventually make a strong enough comeback to provide cash flow to owners with young fleets.

New rigs are taking over

Looking at each main segment of the fleet, it’s clear that old rigs are leaving us.  They were old ten years ago, but now they’re on borrowed time if they’re drilling (and they’re already zombies if they’re not drilling).

The number of old jackups on contract has fallen by over 60% from its highs of 2009. 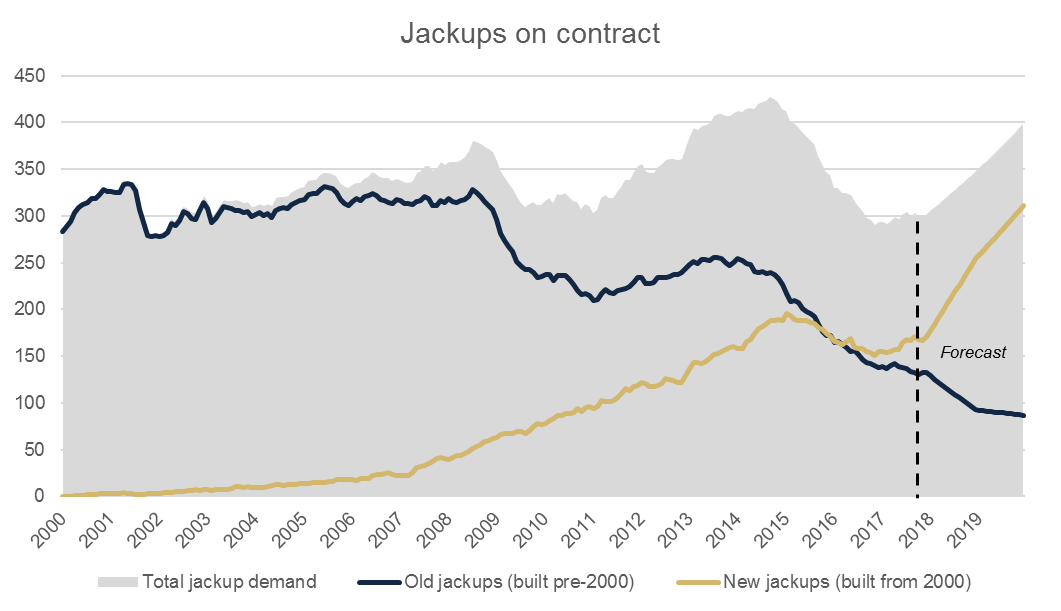 Semisub demand has developed in a similar way. 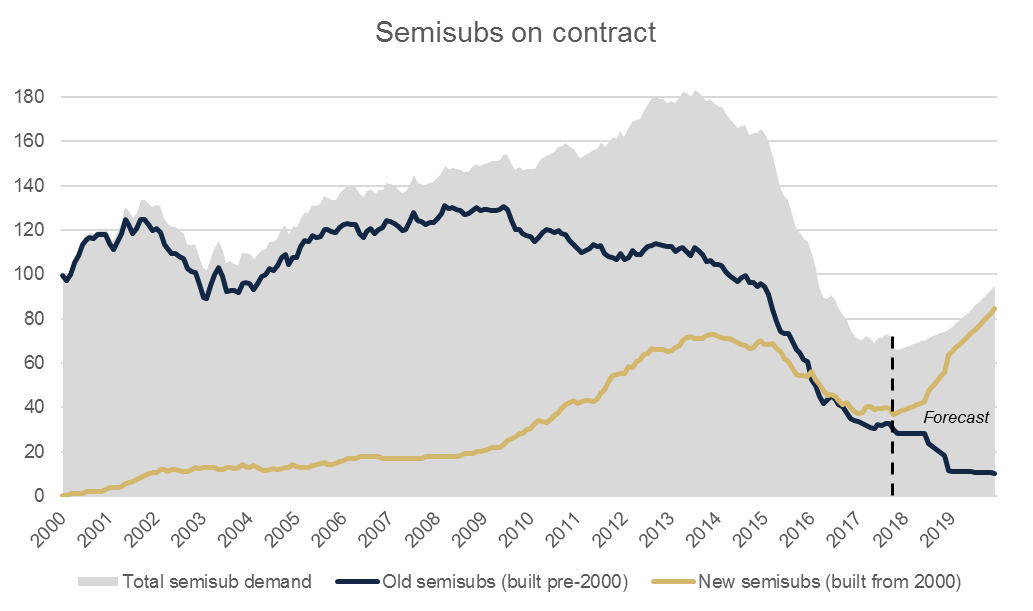 Drillships have different curves as UDW market came into existence recently, but there are only five old drillships on contract today – most of them have been scrapped. 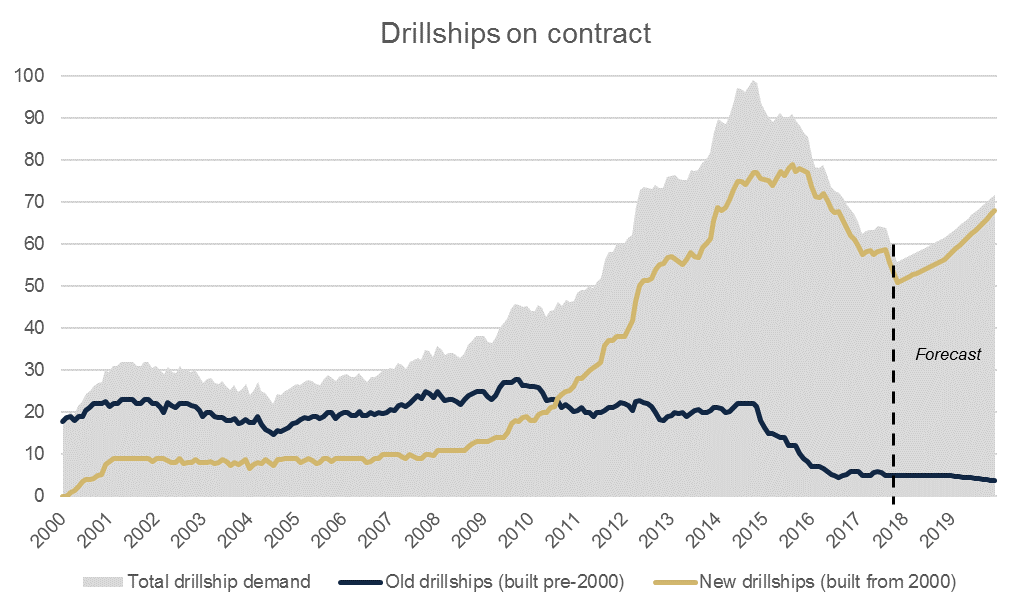 Owners of new rigs still have a challenge though: they'll have to survive on low dayrates until supply is completely reset and demand rises back toward historical averages.  Dayrates for new rigs, even if they’re preferred by oil companies must remain low enough for long enough to ensure that some old rigs don’t become attractive upgrade targets and stay in the market.

But the market outlook hasn’t been better (apart from ultra deepwater) since 2014, and optimism is coming back quickly.

The only risk we see is that the market – or the market outlook – improves too quickly to render all old rigs uncompetitive and entices owners to try to bring back some of them from the dead.

So far, there’s little evidence that could happen as dayrates for jackups are in the $50,000-$70,000 range and drillships are at around $150,000. But the midwater harsh environment semisub segment, with relatively little real oversupply and rising dayrates, could have a higher old-rig reactivation risk.  Owners of old jackups may also continue to put off scrapping.  In both cases, the market effect is likely to be negligible.

The market is moving in the right direction, and if it does, we’ll see a modern global rig fleet with higher utilization and sustainable dayrates sometime during the next two to three years.  In the meantime, we suggest that owners seek out zombie assets and give them the coup de grâce (just in case).