It’s an opportunistic deal at a good price, but adds one more uncontracted rig to their underutilized fleet.

Borr Drilling, with the world’s largest fleet of newbuild jackups couldn’t help themselves from buying another stranded rig.

This time it’s the ex-Japan Drilling managed Hakuryu-15 (now called Hull B378), a Keppel FELS Super B Class Bigfoot which was owned by BOT Lease of Japan.

At $122 million, the deal was just too good for Borr Drilling to pass up.

In an unsurprising statement to placate the market, Borr mentioned in their press release that “the transaction does not indicate that Borr has a strong strategic desire to significantly increase the size of its existing fleet.”

It was a pretty good deal, though

Leaving Borr’s current fleet size and contract backlog alone for a moment, we think the $122 million price makes sense.  Actually, it’s the lowest price Borr has paid for a jackup since the first Super A Class rigs acquired from Hercules in January 2017 (excluding the Transocean jackups which were already delivered at the time of the transaction). 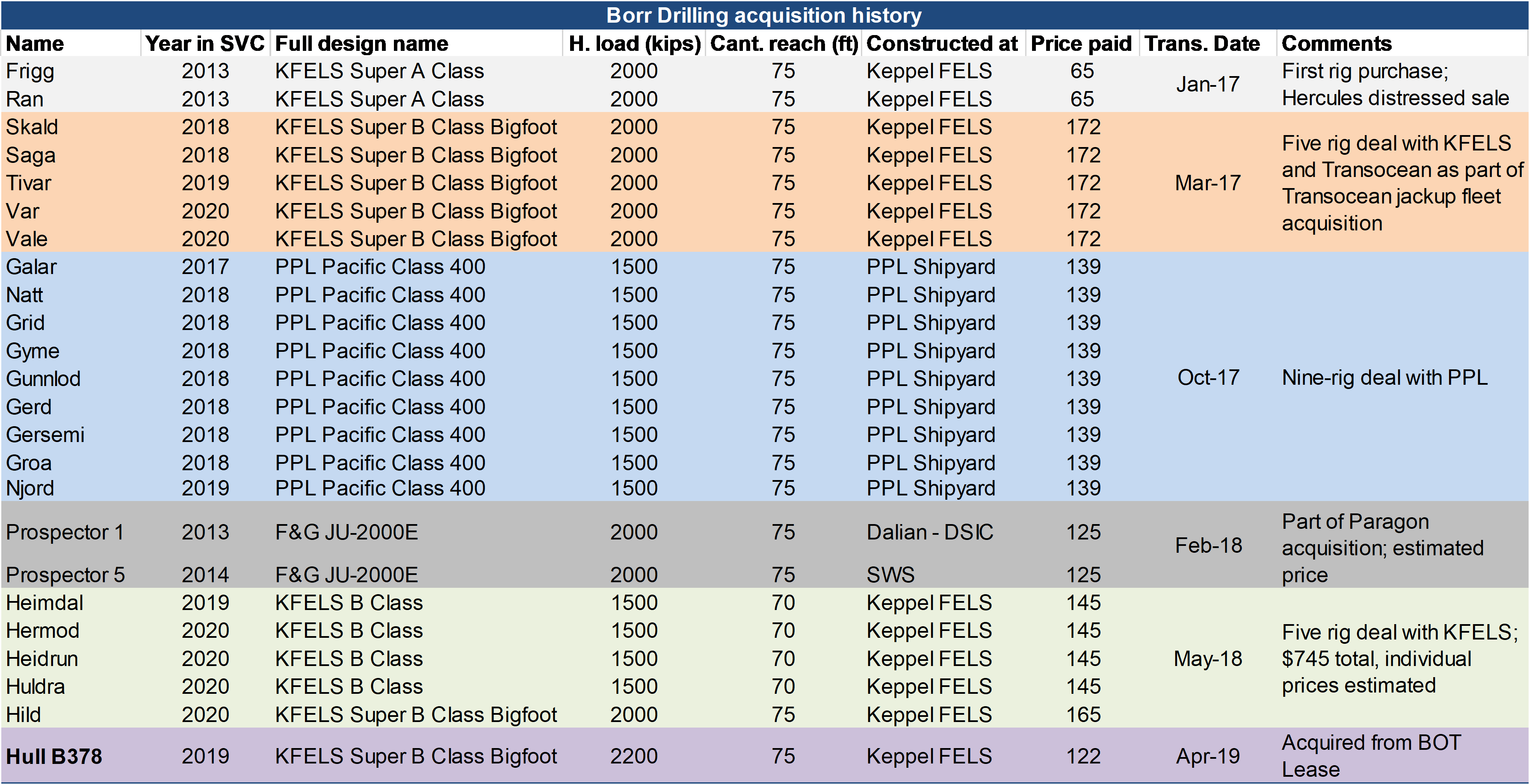 Bassoe Analytics currently values Borr’s two delivered newbuild Super B Class Bigfoots at $122–135 million (a mid-range value of $130 million when drilling).  These rigs will be about one year older than the B378 when the latter is delivered later this year, and the B378 has a slightly higher specification, with HPHT capability and 2200 kips hook load.

We estimate that Borr will have to put about $15 million into the rig to get it delivered and ready to work.  That brings the cost up to $137 million which is right in-line with where Bassoe Analytics estimates the value of a 2019-built Super B Class Bigfoot in drilling condition.

In our jackup valuation update in March, we said:

“Subsequent to recent newbuild jackup transactions involving CJ46 rigs in Indonesia and China (Noble’s two-rig acquisition at an average price of $89 million and Shelf’s two-rig acquisition at a price of $87 million), jackup values for other premium rig designs have fallen by 5–10% depending on the age of the rig and design. While values for CJ46 designs have been supported at current valuations as seen in recent transactions, the value differential (premium) for rigs such as KFELS B Class, PPL 400, JU2000E, and GustoMSC CJ50 has decreased as buyers look to price-benchmarking from the CJ46 transactions and may not be placing as much value on higher specification rigs following the run-up in values resulting from transactions in 2018.”

This is what we’re seeing now.

So while Borr paid a price that was 50% of the original contract price for the rig ($240 million), the price they paid is in-line with current jackup values.

As a result of this transaction, Bassoe Analytics is maintaining current values with the view that values are more likely to rise than fall during 2019. If things continue as they are, with increasing jackup utilization and higher dayrates, asset values should move higher.

But did Borr really need the rig?

Not really.  But it’s likely to help more than hurt.

Ignoring the rigs that are rolling off contract this year, Borr has 14 newbuilds that need contracts.

Borr’s always been a speculator.  Most of their acquisitions have been out of the money since they closed.  But the B378 gives them a chance to make up for some of the decline in asset values when they start moving up again.

Another thing to consider is that Borr might have thought they needed to acquire the rig because if someone else had done it, they’d be getting a high-spec rig for less than Borr’s average acquisition price over the past two years.

For more on Borr’s contract status and backlog, see below or click on the image to view it in Bassoe Analytics (it may take a few seconds for the data to load). 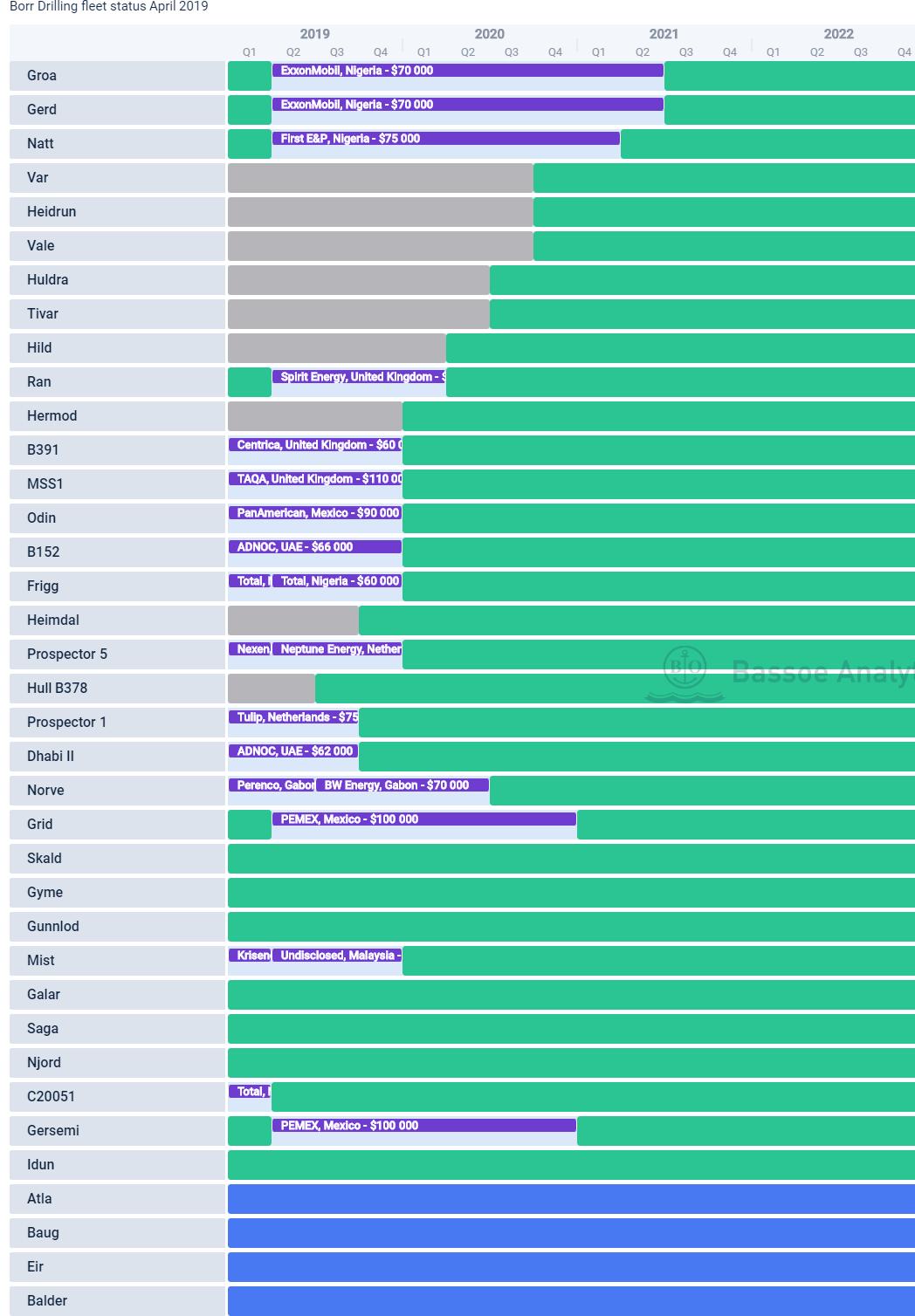