Rig owners’ aversion to consolidation creates a barrier which slows progress toward efficiency.

Competition is vital to a well-functioning market.  As we’ve seen throughout history, when there are too few players, prices rise and freedom of selection decreases.  When there are too many players, growth and profitability become more difficult to attain.

Normally, companies seek to consolidate – or acquire their competitors – to reduce costs (via synergies and scale) and to take out competition and gain more pricing control.  An inherent drive toward consolidation, which stops at the point it becomes anti-competitive, should be present in any market.  But we’re not seeing that drive in the offshore rig industry.

If there’s any industry ripe for consolidation, it’s offshore drilling.  Utilization is low, rig values are low, many owners are financially distressed, and there’s just too much competition in the market.  The abundance of opportunities to consolidate, however, is countered by a list of issues rig owners can’t seem to ignore.  That’s why consolidation isn’t happening on a scale even close to what’s needed.

Currently, out of nearly 1,000 offshore rigs in the world (delivered and under construction), there are nearly 100 rig owners in the market.   And our estimate of the number of owners is slightly biased toward the conservative side.  We exclude shipyards, owners with one or two old rigs which will likely never operate again, and certain wholly owned subsidiaries which are part of the same primary entity.

Despite the numerous reasons why consolidation isn’t happening, it doesn’t change the fact that it should be happening.  Even with the recent (yet to be formalized) acquisitions of Atwood and Songa by Ensco and Transocean, the largest rig owners by number of delivered rigs don’t even break above 8% of fleet ownership.

With the assumption of high net attrition in the fleet over the next two years, the picture doesn’t change much.  Up to 340 rigs could be scrapped, but around 120 are under construction.  The potential net attrition of 220 rigs (if we’re lucky) still leaves us with a highly fragmented market. 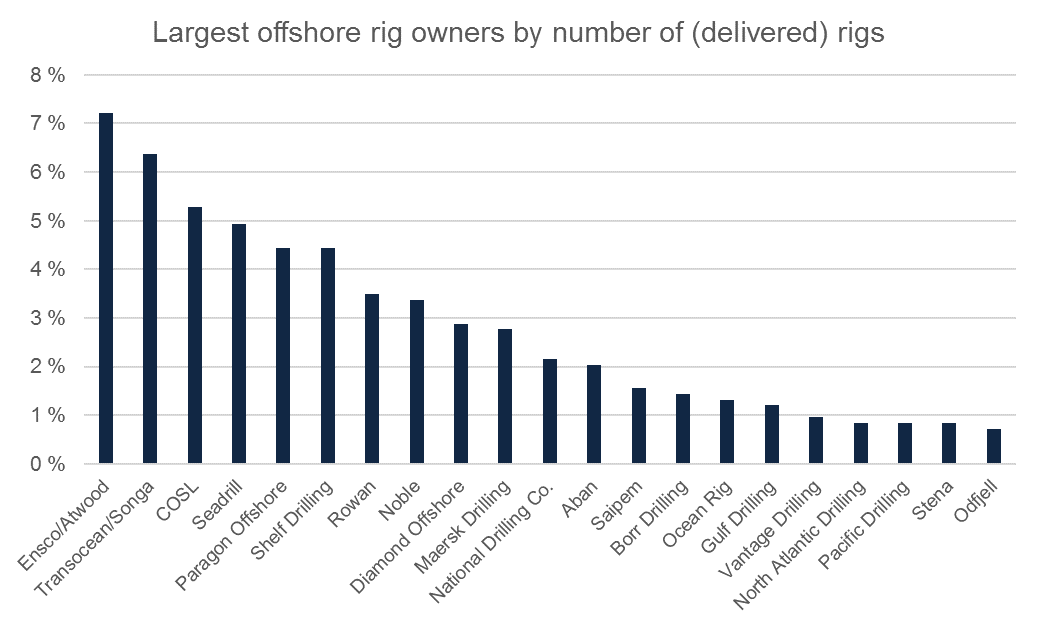 By asset value (derived from our Rig Valuation Tool), the market looks slightly better, but the message doesn’t change:  rig owners should consolidate.  So why aren’t they doing it? 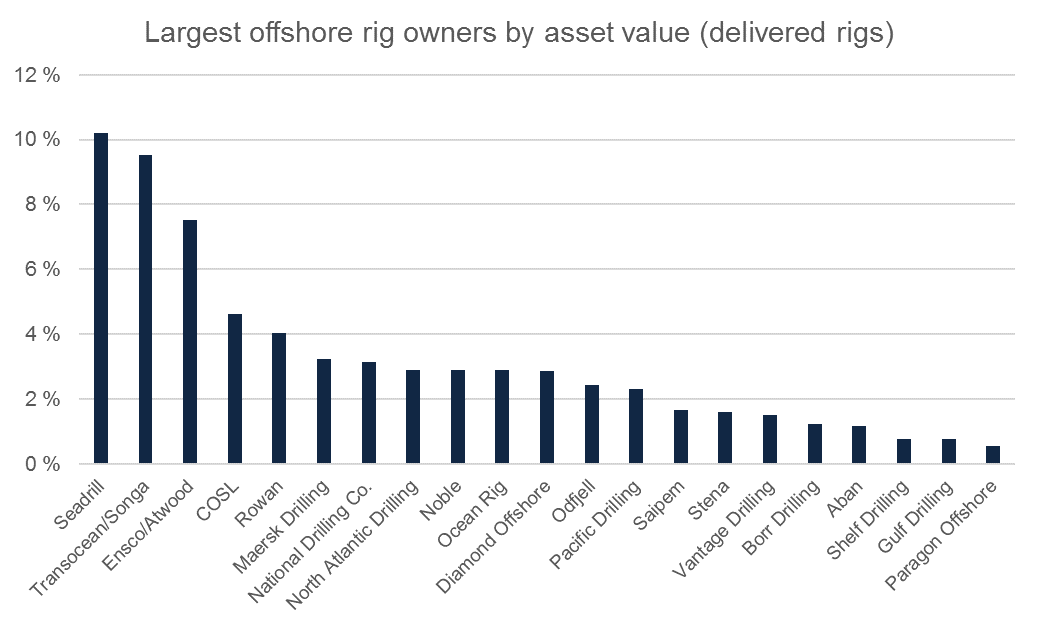 When the market hit its current rough patch, most owners focused on maintaining as much financial strength (cash) as possible to act as a buffer against the risk of bankruptcy from falling revenue and asset values.  (No, I won’t use the “R” word here which should be struck from dictionary of offshore industry financial jargon, but that’s what I’m talking about.)   This has, perhaps understandably, prevented major rig owners, who may have had the financial means to do so, from acquiring competitors.

Consolidation, however, finally began recently with moves by Ensco and Transocean, but by this time, two new entrants, Borr Drilling and Northern Drilling, had already emerged from nowhere.  With Atwood and Songa gone, net consolidation is still zero.

The complexities of the offshore rig market don’t help either

Regionalization also plays a role in the lack of consolidation.  The industry’s mix of regional players (some state-owned) like National Drilling Company, Gulf Drilling, and COSL may not want or need to consolidate.  That may change, but the only major regional deal we’ve seen recently is the Saudi Aramco-Rowan joint venture – and that contributes nothing toward consolidation.

Along with that, many established owners are overly particular about the types of assets they want in their fleet.  Even among rigs of the same design, certain specification and equipment differences make assets that could be competitive unattractive to rig owners who have different standards.

And on top of all this, some owners just don’t want to be acquired or think their value is higher than the market perceives it.  There are countless companies who would rather compete with the bigger guys because they believe they have management systems, history, and culture which the industry needs.  So they wait, betting on the market recovery to open up a brighter future for them and think they’ll somehow be able to thrive in an environment with extreme competition.  This is why some owners focus on differentiation (which is also necessary), but not everyone has the ability or means to differentiate.

The longer the market goes without further consolidation, the higher the risk that costs won’t be cut and efficiency won’t be gained sufficiently enough for owners to operate according to the more stringent requirements by oil companies.  Smaller players won’t be able to keep up, and even though larger, more forward-looking owners may be more able to adapt to changing market conditions with the fleets they have, all owners could benefit from combining with others.

Rumors have been spreading lately of new acquisitions.   Borr has said that they will expand their fleet, and other single assets still under construction are being targeted by a selection of other owners.   These might not be major, market-moving deals, but they help (assuming the buyers are companies that currently exist).

We do see, however, bigger deals happening over the next few months and into next year.  Will they contribute to a significant consolidation effect?  That remains to be seen, but it’s got to get better than it is today.