With stable oil prices, rig oversupply, and lower-than-ever dayrates, the offshore drilling market couldn’t be more attractive to oil companies. But by not keeping offshore rigs on contract, oil companies are contributing to an industry-wide breakdown which may end up coming back to haunt them.

Oil companies have shunned the offshore industry for the past three years as breakeven costs for new projects haven’t been in line with oil prices.  Now oil prices have stabilized, and the consensus is that prices will stay in a $50–70/barrel range for the medium-term.

At the same time, costs have come down considerably for drilling and services, and oil companies have implemented efficiency programs which allow them to reduce breakeven costs for new projects.  Projected costs out to 2020 show that virtually all projects onshore and offshore can tolerate oil prices in the forecasted price band. 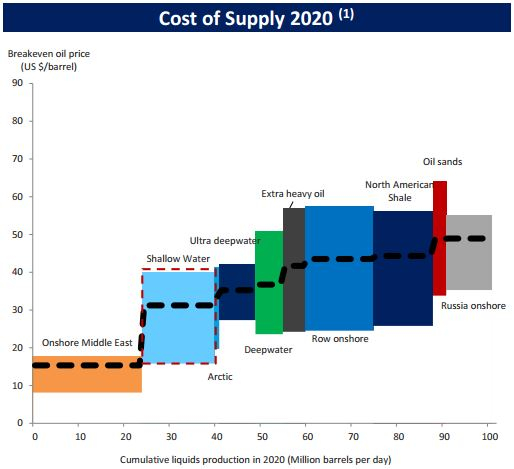 One would think that oil companies would start sanctioning new drilling projects in all segments.  But they’re not – at least not on a large enough scale to ensure that global depletion rates don’t reach unsustainable levels.  Instead, the current trend is on “short-cycle” onshore projects with high decline rates and on optimizing current production.

Offshore projects normally offer larger production volumes, but they have higher cost and time requirements.  So many offshore projects have been cancelled or put on hold over the past few years that the number of new wells drilled has reached its lowest point ever. 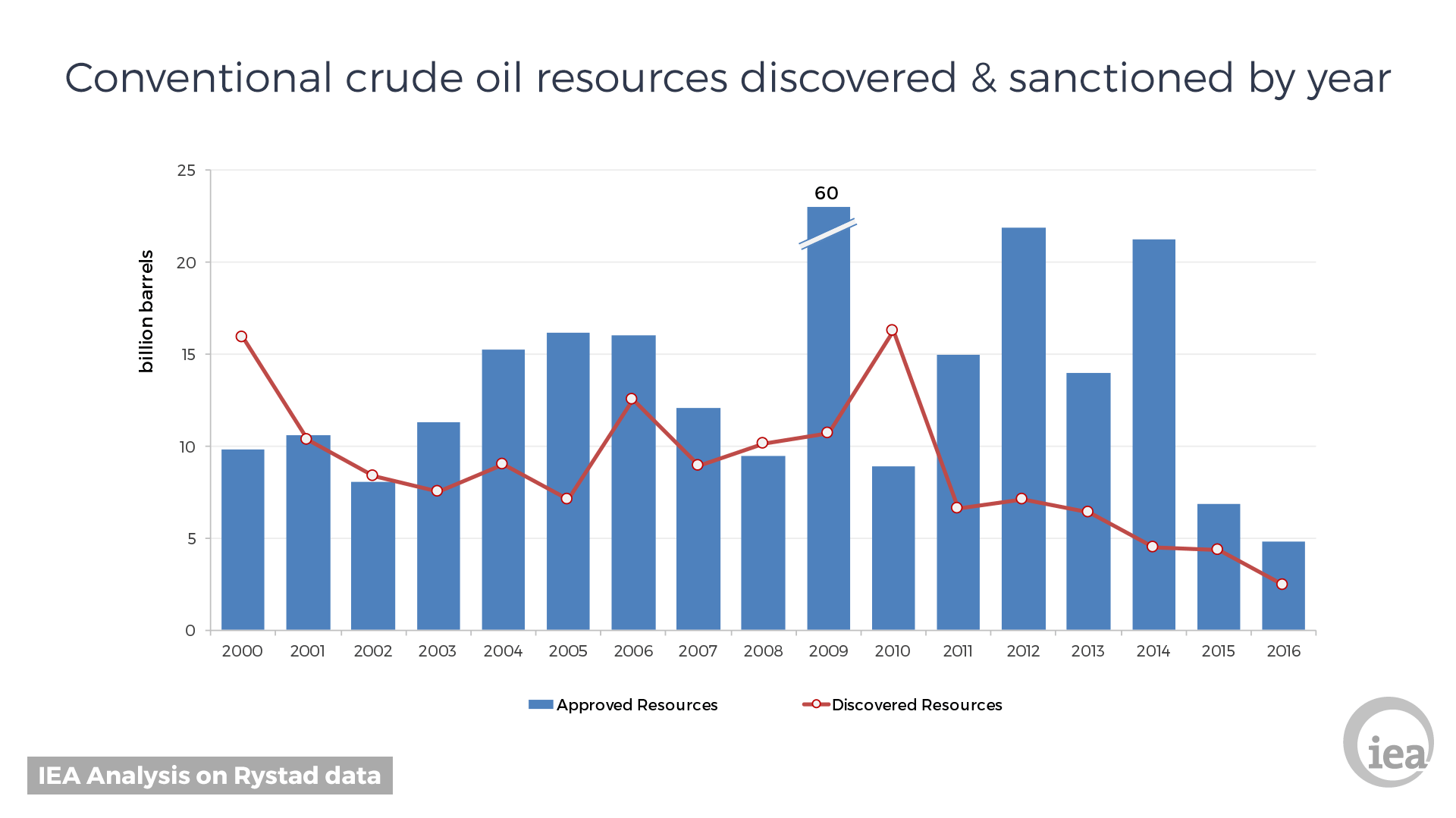 New, large scale offshore development is needed to maintain oil production at levels that will avert a sudden supply deficit (and a subsequent dramatic increase in oil prices).  Oil companies have heard this, and pretty much everyone else has too.  But little is being done about it.

During the past ten years, oil companies spent so much on offshore drilling that field development costs became unsustainable as the oil price started to fall.  The price fall didn’t happen fast enough, however, to restrain the expectations of continued high activity in the rig market which led to too many rigs being built.

When oil prices crashed and everything suddenly stopped, oil companies were left incapacitated, financially constrained, and unable to take on new projects.

But now that oil companies can operate in a lower cost offshore environment due to high rig supply and better efficiency, they would be better off initiating new projects now instead of later.  Although the resulting increase in the oil price from a supply crunch could partially and temporarily offset any of the higher costs oil companies would incur in field development (due to higher rig demand, for example), betting on the extent and longevity of this is risky.

More importantly, however, continued low activity threatens the viability of their drilling asset base.

As every day goes by, the negative effects of rig stacking (i.e., longer time to get rigs back into the market, higher risk of operational issues, and higher costs) multiply.

While tendering activity for offshore rigs is finally increasing, it’s not happening fast enough. Procrastination by oil companies along with their lack of agility and limited offshore focus have driven rig owners into damage control mode.  Rig owners have had to implement massive job cuts, defer newbuild deliveries, and stack rigs with up to hundreds of millions of dollars of systems and equipment onboard.

Extended low (or slowly increasing) drilling activity risks being outpaced by the decreasing number of optimal rigs (i.e., operational, warm stacked, or well-preserved) which are available to oil companies.  As we mentioned last week, for established rig owners who implement proper stacking for their rigs, rig oversupply isn’t a major issue – this situation will be great for them.  But for oil companies, the consequence of prolonged aversion to sanctioning offshore projects is potentially compromised operations (because, eventually, oil companies will be forced to take “worse” rigs as the supply of optimal rigs decreases).

Compounding the growing supply of deteriorating rigs is the fact that rig owners are losing skilled personnel.  When rigs need to be put back in service and operated, there will be a lack of competence and consistency in the industry.

Oil companies have kicked the can down the road.   When they reach that can again, however, they will find it battered, rusty, and emptier than it was before.  And they’ll still need to use it.

And why not take advantage of low rig rates at the same time?

The oversupplied offshore rig market offers oil companies a perfect opportunity.  They can find high quality rigs in nearly all offshore regions at dayrates not seen before.  Compared to $600,000 per day for a UDW drillship or $180,000 per day for a high spec jackup, they can contract these rigs for less than 50% of those costs now.

Oil companies should be sanctioning offshore projects faster and taking advantage of a scenario they haven’t seen in decades: low dayrates and high supply of new rig assets.  By moving early, they will ensure that they will be able to accommodate the expected need for new offshore wells, keep costs low, and help maintain the rig fleet.