It may sound too good to be true, but it’s not completely out of the question.

With utilization levels at just over 50% for all rig types and over 130 newbuild rigs stranded or under construction, the need for an increase in rig scrapping (recycling) seems obvious.  But it’s not that simple.

Owners such as Transocean, Diamond, and Ensco have made significant contributions to reducing oversupply in recent years.  Combined, they have sent (or have committed to send) nearly 70 rigs to recycling yards since 2014. Overall, almost 100 rigs have been announced for recycling during this time, and recycling plans for another 10–15 more have been initiated. 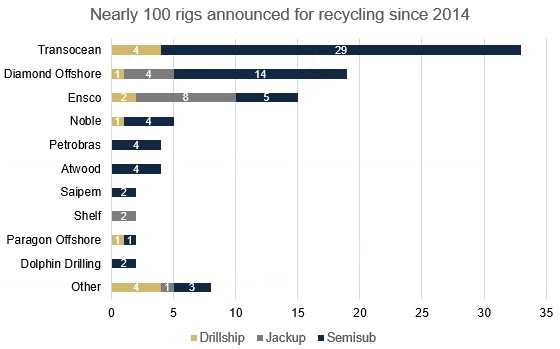 While recent attrition accounts for about 10% of the current global rig fleet, we estimate that another 30–40% of rigs could disappear by 2020.

Costs and obsolescence will win over owners’ reluctance

As reactivation costs for cold stacked rigs continue to rise and SPS survey costs loom, it’s likely that most rigs built pre-1999 won’t live to see the next decade.  The cost of reactivating a cold stacked 1980s built semisub, for example, could easily run into the $20 million-plus range.  And once that rig needs its five-year SPS, $50 million or more would need to be spent on top of that.

Unless a rig owner can secure a long-term contract for an old rig, they’re unlikely to make any investment in the asset.  Right now, long term contracts are far from abundant.   With a few exceptions, most drilling contracts today are too short to support reactivation of old rigs.

Take a conservative case using a $75 million investment for an old floating rig.  A dayrate of over $350,000 for a one-year contract would be required just to break even.  That’s an increase of around 100% from today’s levels.

Even if dayrates bounce back, our example assumes that the old rig would be considered by an oil company for the job.  These days, most of the major oil companies are looking for newer assets which are safer and more efficient than their predecessors – especially in regions like the North Sea (which could be facing an undersupply of viable rigs).  Over time this trend will strengthen and expand into other areas.

Traditional markets for old rigs, such as the Middle East and India are already signaling future demand for new rigs instead of old ones.  The Saudi Aramco-Rowan joint venture will build twenty newbuild jackups, and ONGC has indicated that they could start placing age limits on rigs for future tenders.

Other technology requirements (“digital rig” capabilities) are also becoming more important to oil companies, and even if some of them can be retrofitted on old rigs, it’s not going to happen.  This issue isn’t just a threat to old rigs; it’s also a threat to new ones, but that’s a discussion for another day.

A lot of scrapping in store

By taking out all rigs built pre-1990 which don’t have contracts beyond year-end 2019 and any floaters built pre-2000 which are currently cold stacked, we derive a pool of at least 340 rigs with potential to be recycled. 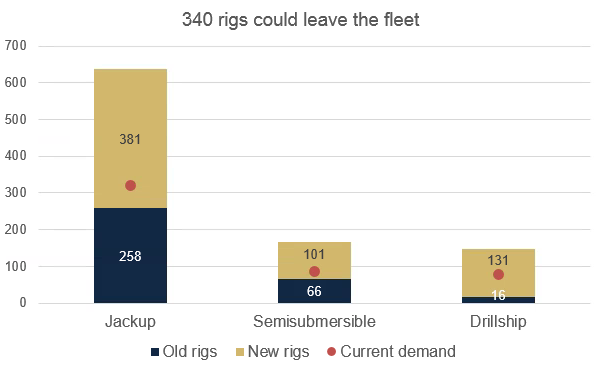 There are other ways to filter the fleet, but the magnitude of the output doesn’t change.  The rig fleet will see a lot more attrition in the years to come.

Why is it taking so long?

The question isn’t whether mass scrapping will happen, but when.  For owners of cold stacked old rigs, there are a range of issues holding up the fleet rebalancing process.  Some owners don’t mind paying nominal stacking costs; some don’t want to have to say goodbye to the majority of their fleets; some are holding out for a miracle in the rig market.

But there are other more practical issues involved.  Selling rigs into the scrap market is a tedious process which takes time and incurs costs within the owner’s organization.  The sales value (i.e., net gain) to transaction time and cost ratio is low to negative.   And finding yard capacity, especially considering that many owners want their rigs recycled “green”, isn’t an easy task as the volume of rigs for recycling increases.

That said, an old cold stacked rig is a liability (with respect to safety and cost) which grows by the day, and owners would be better off getting rid of them sooner rather than later.

The reality, however, is that it will take time to get old rigs into recycling yards.  As we see more demand for new rigs and as we see technology and efficiency requirements become more stringent, more owners will start shedding obsolete assets and focusing on rigs with a future.