Ocean Rig monetizes their fleet while Transocean gets bigger. Both parties can call it a win.

Transocean announced today their acquisition of Ocean Rig for $2.7 billion in a cash and stock transaction.

As a result of the deal, Ocean Rig has found a solution to their uncertain future and Transocean has gained a fleet of ultra deepwater drillships and one (or two if they’re lucky) harsh environment semisubs at decent prices.

Ocean Rig needed something to happen to them

Ocean Rig has been an interesting case among the troubled deepwater rig owners.  In March last year, the company filed for bankruptcy protection and subsequently restructured into a lower-cost, realistically-valued, and unleveraged drilling contractor.

Since then, Ocean Rig has made little progress toward building backlog.

Of their 11 delivered rigs, only three are working.  The Ocean Rig Skyros, an ultra deepwater drillship, is the only rig on a long-term contract, and that's with Total in Angola at $573,000 per day (a rate which you won’t see again for a while).  The contract was awarded years ago and runs until July 2021.

Post-restructuring, contract awards for Ocean Rig have been few and far between.  Now seven of their ultra deepwater drillships are stacked with no future contracts.

They’ve also got the cold stacked Eirik Raude, a harsh environment semisub from 2002, in Greece.  Their plan to raise money to upgrade the rig (saving it from the scrapyard) for over $100 million failed in June.

There's a bit of a bright side though.  The Ocean Rig Poseidon drillship has seen some new, short-term awards trickle in in West Africa (including a letter of intent with an undisclosed European oil company).

And they’ve done well with the Leiv Eiriksson – Lundin in Norway has extended their drilling contract until the end of 2018, and further extensions are likely.  After that, the rig will work for ConocoPhillips under a three-year Master Service Agreement in 2019 which is likely to extend beyond the initial 90-day Drilling Program Order they’ve secured so far.

That still leaves eight rigs with no future commitments.  Not to mention the two newbuild drillships, Ocean Rig Santorini and Ocean Rig Crete, which are scheduled for delivery in 2019 and 2020.

Ocean Rig wasn’t making enough happen on the operational side.  Larger, more established owners like Transocean, Ensco, Diamond, and Rowan had a leg up on them in a deepwater market with high competition and low dayrates.

In other words, something or someone needed to rescue them.

Of course, one winner in this whole deal is Ocean Rig’s founder and largest shareholder, George Economou, who has adeptly maneuvered through boom and bust and come out better off each time.

The rest of the shareholders in Ocean Rig will get some cash along with shares in the world’s largest floating rig company.  Transocean’s network and legacy with oil companies, global reach, and experience with rig reactivations should allow them to turn Ocean Rig’s mostly-idle fleet into a competitive one again.

After the Songa acquisition and their investment in the Transocean Norge (formerly known as the West Rigel), Transocean was known to be on the lookout for another fleet-growing opportunity.

Ocean Rig gives Transocean a good rig in Norway, a drillship on a long-term contract at legacy dayrates, and a bunch of drillships they can work with.  Along with that, Transocean makes more progress in consolidating the ultra deepwater market and takes out a potential low-rate bidder.   All this comes at a reasonable price.

If we look at Ocean Rig’s fleet of 11 delivered plus two under construction rigs, the price of $2.7 million makes sense.

Bassoe Analytics' offshore rig values show a total charter-free fleet value for Ocean Rig of $2.50–2.75 billion (assuming a current value of $295–330 million for the two undelivered drillships at Samsung Heavy Industries).  Adding in an estimated present value of $450 million for Ocean Rig’s $743 million backlog and assuming $500 million in capital commitments for the Ocean Rig Crete and spares and equipment costs for both newbuilds, we get to an enterprise value of $2.45–2.70 billion vs. the $2.70 billion that Transocean paid. 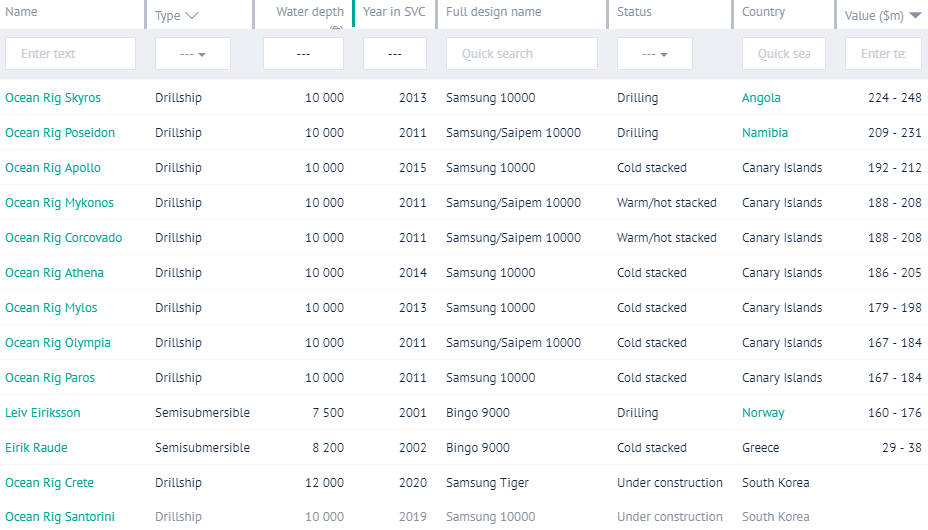 Moving ahead, it will be interesting to see if Transocean decides to upgrade and reactivate the Eirik Raude for work in the North Sea.  In a market in need of more new-rig supply, will the Eirik Raude move in as a cheaper alternative to a newbuild semisub?

The next question is: will Transocean scrap any of the cold stacked drillships?  As Transocean mentioned in their announcement, they'll review and re-rank their fleet after this transaction concludes.  This could lead to further retirements of rigs determined to be less competitive.  At the average price per rig Transocean is paying for Ocean Rig’s drillships, and the expectation of increasing rig values over the next year, they could get away with scrapping one or two of them to reduce oversupply without it affecting the economics of the deal.