With lingering oversupply in the shipping and offshore markets, the “big 3” Korean shipyards are still struggling to survive. Here’s the latest on the situation with respect to the offshore market.

The shipbuilding industry in Korea is in the midst of a major restructuring.  After the sharp drop in offshore rig and vessel orders, yards are forced to make changes to ensure their survival.  What will these changes mean for the offshore industry?

The deepwater market bubble has burst (for a while) 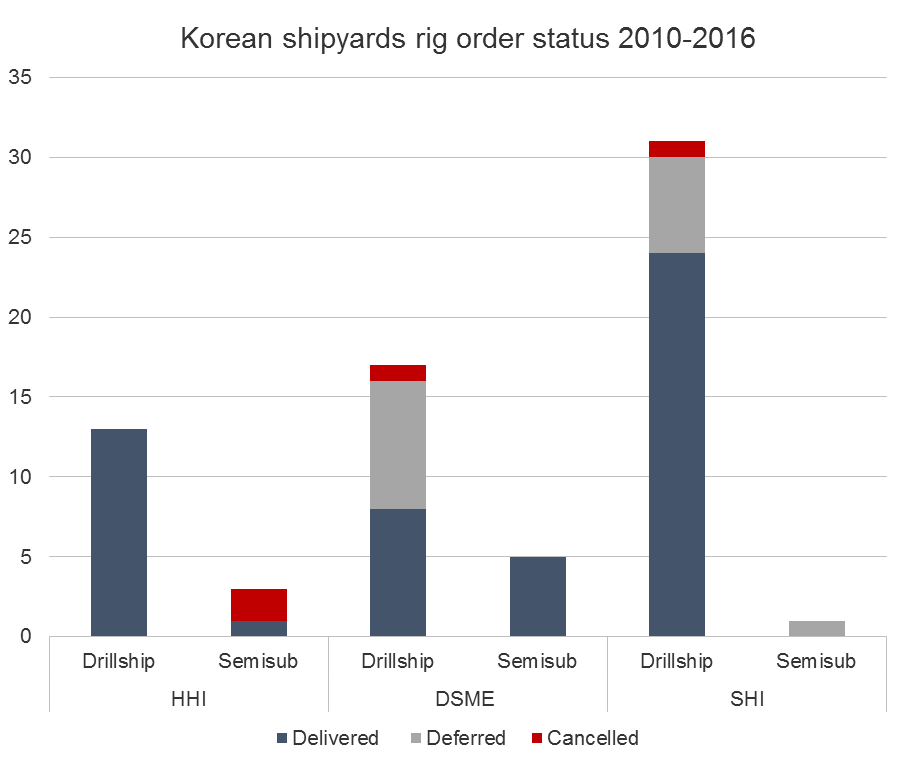 No orders for drilling rigs have been placed since April 2014, and the once massive backlogs that these yards carried have imploded.  15 rigs are currently sitting virtually complete at the quayside as owners have deferred delivery (and payment) to buy time until market conditions improve.

With the ultra deepwater market oversupplied by over 90 rigs, and current dayrates near break-even, the outlook for near term new orders looks bleak.  As such, the Korean yards have had to initiate self-rescue plans to help get them through the dearth of new orders.

Self-rescue plans have started, but more “rescuing” may be in store

Currently, all yards are reducing headcount dramatically, and restructuring plans are being implemented.  So far, the Korean government (and state-run banks) have required the yards to downsize while also providing financial aid to them for up to around USD 10 billion.  The government has said it is willing to back the yards provided they implement their “self-rescue” plans, but how far their subsidies will go is still unknown.

As part of the nationwide shipyard restructuring, 31 docks will be closed and up to 20,000 workers will be laid off (32% of the combined workforce of the three yards).  The government will also place orders for over 250 vessels and provide financial support for R&D (the two activities are equivalent to nearly USD 10 billion).

In addition to government aid, yards are also being forced to raise cash on their own. In November, Samsung Heavy Industries raised nearly USD 1 billion via a rights offering and has plans to sell its hotel on Geoje Island.  Although the yard received no orders until September (two LNG carriers plus four Suezmax tankers), it did return to a profit in Q3 2016.

Hyundai Heavy Industries has announced that it will split into six businesses.  This is part of the “last steps of the self-rescue plan…[and] prepare a foothold for a new start,” the company said recently.  HHI has received two rig cancellations already from Seadrill (West Mira) and Fred Olsen (Bollsta Dolphin).  Both of these projects have resulted in losses for the yard as they were cancelled on the basis of delivery delays while both rigs sit virtually complete at the quayside.

While HHI and SHI seem to be relatively well under control, DSME finds itself in a more difficult situation.   The yard’s creditors (primarily Korea Development Bank) have approved a USD 2.8 billion debt-for-equity swap to maintain its listing on the KOSPI.  As part of the deal, the creditors have demanded wage freezes and the labor union’s commitment to not launch any strikes.  These demands have reportedly been met now.  As pointed out by Business Korea, one likely scenario is that “DSME will emerge as a smaller yard which focuses on the LNG and large container markets where the company has the best technology in the world.”

So what does all this mean for rig owners?

For owners with rigs under construction, we see little risk of default by any of the yards to an extent which would affect rig delivery (assuming the owners eventually want to take delivery of the rigs).  Many owners, however, may see this as a downside, as cancelling a newbuild drillship right now may be a financially attractive option.

As the future of Korean rig construction goes, we see SHI emerging as a key yard along with HHI to a lesser degree.  DSME, however, is likely to become less willing and able to focus on floating drilling rigs in the future.  Once these yards get control over their financial situations and clean up organizationally, we expect pricing to be lower not only because of offshore drilling equipment price decreases, but also because of the yards’ leaner overhead structures and reduced labor costs.

We only see a limited number of floaters being ordered before 2020 (midwater harsh environment, 20k PSI purpose built, and workover/well intervention units), but when the the market improves, the Korean yards will also face the threat of competition from Singapore along with Chinese yards which have further developed during the downturn.  This means that with fewer orders to compete for among a market with more competition, Korean yards will likely not return to being the overwhelmingly dominant force in floating rig construction that they were for so many years.