Packed full of jackup rigs which owners don’t want to take delivery of, shipyards are doing little to help their situation. They could benefit from a more commercial approach.

As we noted in our previous article, 107 jackup rigs are sitting at yards with yards and owners continuing the game of delivery deferrals while waiting for the market to improve.

What makes matters worse for the yards is that nearly 60 of the 107 newbuild jackups are owned (or were initiated) by speculative, new-entrant buyers who sought primarily to take advantage of the newbuild boom in 2012–2014.  Forty-three new-entrant newbuilds are in China alone.

Even if the global jackup market, which is oversupplied by over 300 rigs, does improve over the next two years, delivered rigs will be first in line to win new contracts.  As such, a considerable demand increase would be required for oil companies to start taking supply from the fleet of deferred (undelivered) newbuild rigs, and those owned by established drilling contractors will have the advantage over those owned by new-entrant owners.  In other words, new-entrant newbuilds are last in a long, slow-moving line.

Yards are frozen in a state of indecisiveness

Currently, yards are doing little, if anything, other than agreeing to more delivery deferrals.  Based on continued sluggish demand growth, we expect jackup deliveries to continue to be pushed back.  China Merchants, for example, said recently that they don’t expect to deliver any of their 19 jackups this year – these are all owned by new-entrants or the yard directly. 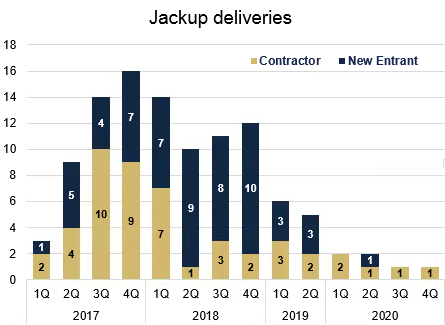 China has options.  One of them is Iran, which due to  sanctions, is a more accessible destination for Chinese-built rigs.  Demand in the country is only growing slightly, but most of the established drilling contractors are either not interested or unable to operate there.  Several jackups from China have already gone to Iran, and a few more are likely to follow.  This could lead to around 5–10 newbuild jackups being sold to Iran in the short to medium term.

Another potentially more effective option for China would be a domestic fleet renewal program.  There are currently 40 delivered jackups in China, and all of them are owned and operated by state-owned COSL, CPOE, Sinopec, and Shengli Offshore.  Of the 25 rigs on contract, 13 were built in the late 1970s and early 1980s.  Eight post-2005 built jackups are stacked too, but assuming that Chinese oil companies could add incremental demand, then the 13 old rigs could be considered fully replaceable by newbuilds.

If China decided to recycle at least all the 13 old rigs and substitute them with newbuilds, they would reduce oversupply, get assets off the yards’ books, and further support their scrapyards by providing a large amount of steel recycling volume.  An initiative such as this would give domestic Chinese contractors an improved fleet profile and help lift jackup rig values.

While Chinese yards will still have to deal with a struggling jackup market and a relentless oversupply of rigs over the next few years, solutions like a fleet renewal program could be enough to initiate a meaningful boost to the market.

The approach yards are taking now could turn out to be worse than entering into less financially attractive agreements which actually get their rigs delivered earlier instead of later.  Giving a rig away on low margin (or loss making) terms may not be pleasant, but long term stacking due to delivery deferrals incurs holding costs in addition to value destruction due to future reactivation costs – if they ever get to the point of delivery.

If yards were as accommodative in accepting alternative commercial deals as they are on accepting delivery deferrals, they may end up in a better position than they would be in by trying to wait the market out.

Is the strategy taken by Keppel FELS in the rumored Borr Drilling-Transocean deal the first sign of a new attitude from shipyards?