They’re cheap to stack and costly to scrap, but old jackups are finally moving off to scrapyards.

The most junk-laden segment of the offshore rig market looks as if it’s starting to clean itself up. 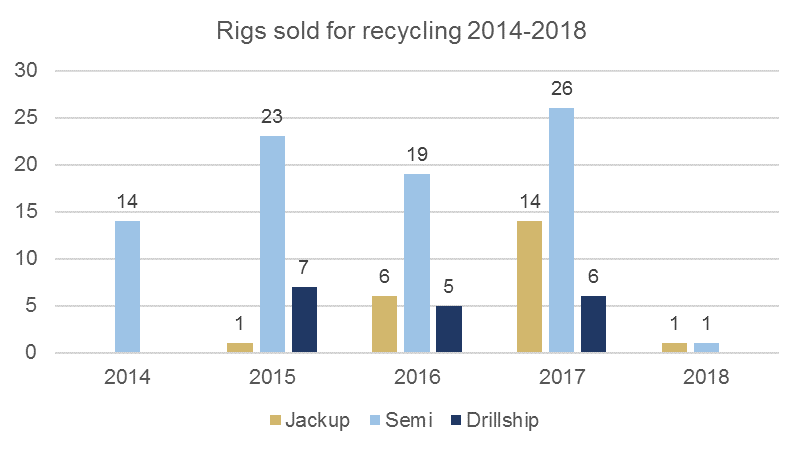 But recent jackup scrapping activity hardly puts a dent in the number of zombie rigs with no future in the competitive drilling market (just 3% of the fleet scrapped so far).  More than 130 non-competitive jackups still exist, and if you add these to the number of old jackups coming off contract over the next year, the pool of potential scrap jackups becomes well over 200 units.

So why, when owners have already scrapped over 100 floating rigs, is it taking so long to drain the swamp of old jackups?

Two years ago (or even 6 months ago), if you had a 30-year old cold stacked jackup, you could leave it somewhere and wait for that hyperbolic liftoff in rig demand.  Stacking costs were (and still are) low, and when the offshore drilling market returned to its peak, reactivation costs would only be a fraction of what they are for floating rigs.

Jackup owners had a cheap option to keep assets in play, a chance to get a piece of the jackpot.

Add this to the fact that, compared to floating rigs, jackups cost more to transport, have a lower steel value, have a smaller pool of buyers and ship recycling facilities which can handle such assets, and may, in some cases, be difficult or unsafe to move from their locations if their jacking systems have lost functionality.

But as the jackpot dwindles, as the likelihood of higher utilization and dayrates for old assets fades, and as rig reactivation costs rise due to longer-than-envisioned periods of stacking, there’s not much reason to stay in the game.

This is what rig owners have started coming to terms with.  Acceptance of reality takes time, though, and the process of actually scrapping a jackup takes more time.  It’s just not something rig owners want to spend their days dealing with.

That’s why, even if some owners want to get out of the game and scrap their assets, it won’t all happen in a day, or a year.

Attitudes and economics are changing

Most of the easy scrapping has been done now.  Out of the pool of nearly 340 rigs in today’s fleet which are over twenty years old, only around 70 are floating rigs while 265 are jackups.

And the need for fleet optimization and scrapping is finally starting to eat into jackup rig supply.

The jackup scrapping trend is also being helped by transportation costs – the most influential variable in the rig scrapping equation – which have nearly halved over the past two years as more competition has driven heavylift rates down.  At the same time, steel prices in Turkey and India have doubled since 2016.

As a seller, a year ago, you’d be lucky to break even on a scrap jackup sale after accounting for transport costs, administrative time spent, and legal fees.  Today, owners still don't really make money off selling rigs for scrap, but the economics have improved enough to make the process more palatable.

Environmental and social responsibility pressure will affect the rate of scrapping

In some parts of the world, the ship recycling industry is notorious for its lack of safety and environmental standards.  Poor working conditions, lack of safety regulations, and hazardous materials contamination have led many owners (and government authorities) to require “green recycling” for scrapped rigs.

In January, the Scottish Environment Protection Agency opened an investigation after the sale of a major US drilling contractor’s three semisubs to a cash buyer due to concerns that the rigs may be sold to non-green yards in India or Bangladesh.

Recent, and increasing, pressure from authorities and vessel owners has led to improvements in recycling procedures at many yards.  As owners continue strengthening their recycling philosophies, they'll likely spend more time and effort ensuring that they promote and comply with Basel Convention (or similar) regulations.

The effect of this, which derives from a necessary change in the industry, is that scrapping could take longer as there are not enough “real” green recycling facilities around the world.

It’ll take a while, but it’s starting to happen

While cleaning up the jackup fleet will take years, and while there are a number of factors slowing it down, at least the reluctance to scrap we’ve seen from owners is abating.  The rate of scrapping is, and will continue, increasing.  And we expect 2018 to be another record year for jackup attrition.