High rig utilization isn’t just a dream. It’s a requirement for a meaningful recovery in dayrates.

When utilization in the offshore rig market reaches around 85%, dayrates start to rise significantly.

As utilization moves from 60%, for example, up toward over 80%, dayrates increase, but once 85% utilization is reached, dayrates normally kick into a higher gear and rise at a faster rate relative to before 85% was reached – and vice-versa.

Take drillships as an example.  During 2014, utilization was nearly 100% during the early part of the year.  Dayrates were also at cycle highs, with some fixtures above $600,000. As utilization declined toward 50%, dayrates crashed to around 30% of their highs. 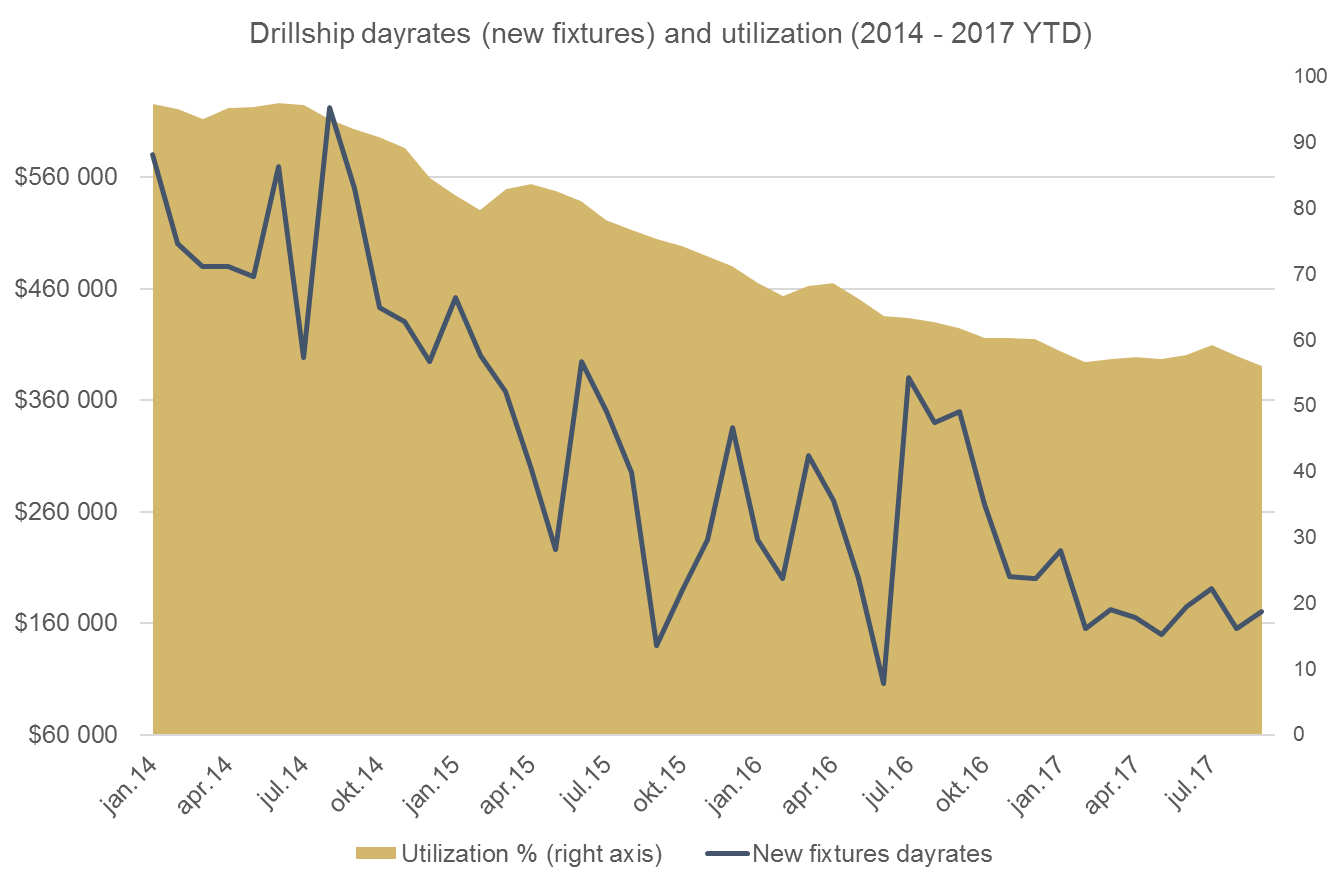 Even if dayrates never reach their highs again (because the market is fundamentally different now as efficiency and cost-savings dominate), they must somehow increase to levels that generate “investor-friendly” amounts of cash.  The problem is that until utilization rises sufficiently, the rig market will be stuck with more or less cash break-even dayrates – which are unsustainable if rig owners are to thrive again.

Right now, utilization for all rig types (jackups, semisubs, and drillships) – based on the full potential supply of rigs which includes those under construction – ranges between 50% and 60%.  We’ve seen an increase in demand for newer rigs lately, but we’re far from the optimal 85% utilization that every rig owner wants to see.

A quick note on bifurcation

There’s a lot of talk about bifurcation (which has been going on for years), and strengthening preferences by oil companies for new rigs will continue to solidify this phenomenon.  Bifurcation might create better effective utilization for certain segments of the market, but it doesn’t completely negate oversupply.  Even with the bifurcation we're seeing, old rigs still win contracts (especially in the Middle East and India), and there are simply too many newer rigs with respect to demand.

In other words, bifurcation exists partly because the market is oversupplied.

So will the market ever see 85% or more utilization again?

Yes, it will – if the right things happen.

Superficially, it’s pretty simple: there needs to be a reduction in rig supply and an increase in rig demand. But what combination of these factors is realistic, and what’s even feasible?

Although this is a numbers game with endless possibilities and scenarios, we’ve tried to illustrate a few of the scenarios which can achieve 85% utilization.

We recently wrote that up to 340 offshore drilling rigs could be scrapped by 2020. That exercise identified all rigs which weren’t viable in today’s market due to age or technical specification.

But we didn’t look into how many rigs need to be scrapped.  We’ll do that here, but first, let’s assume that only minimal scrapping takes place (say 20% of our 340). 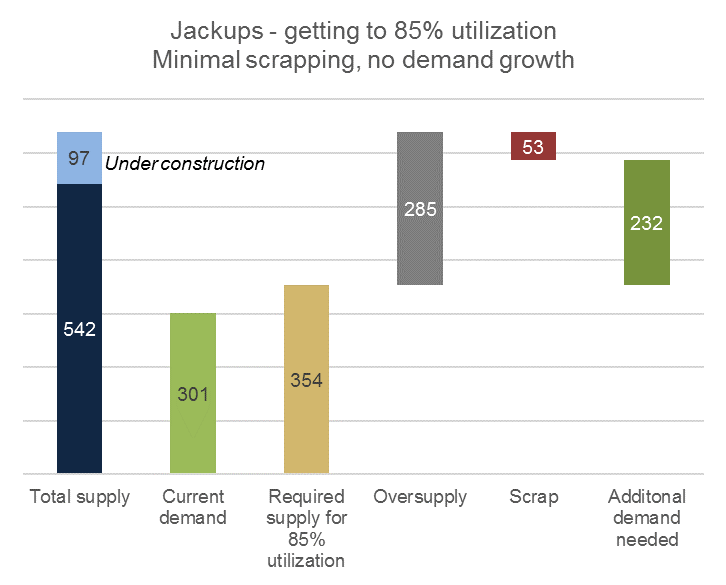 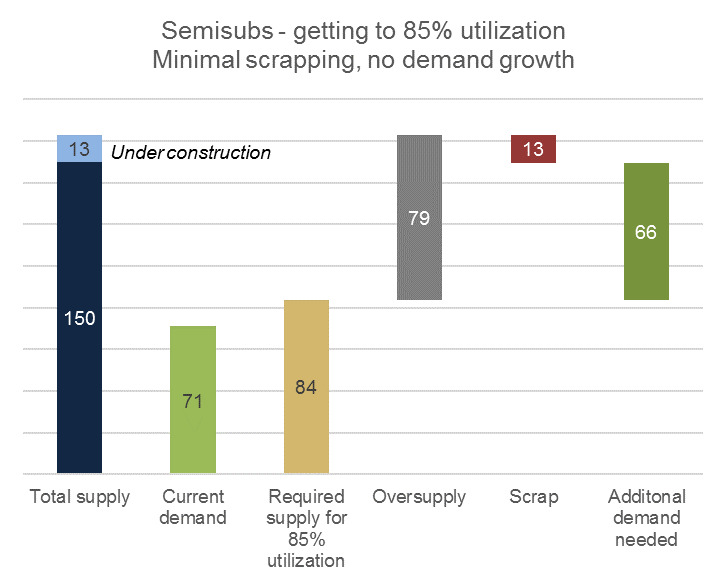 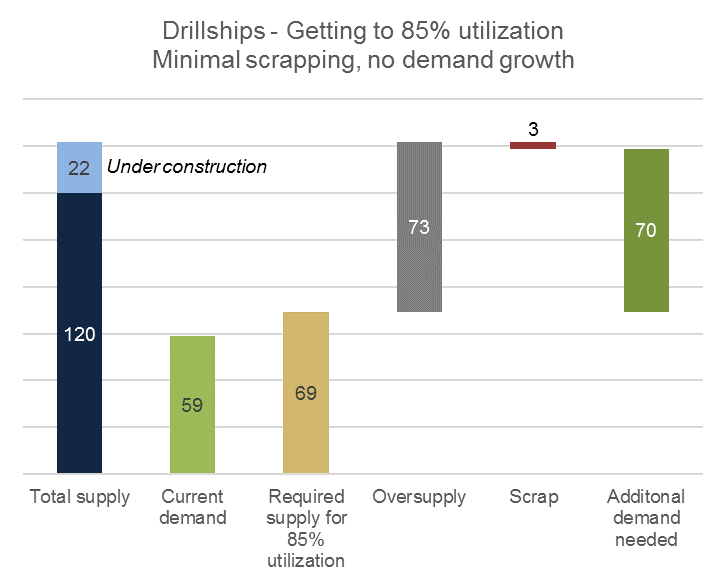 Finding the right balance of scrapping and increased demand

If we assume demand increases to “realistic” sustainable levels (without exceeding previous all-time highs), we can derive the amount of scrapping required to leave the market with 85% utilization.

For jackups, a 32% increase in demand would get us to 397 rigs (the all-time high) and a required supply of 467 rigs (i.e., total supply at 85% utilization).  To reach that level of supply, 172 jackups would have to be scrapped. This equals about two thirds of the 258 potential jackup scrapping candidates we identified previously in our 340 total scrap rig number.  This is doable – especially if some of the Chinese newbuilds are never delivered.

And if all 258 jackups were scrapped, the market would reach 85% utilization with only a 7% increase in demand. 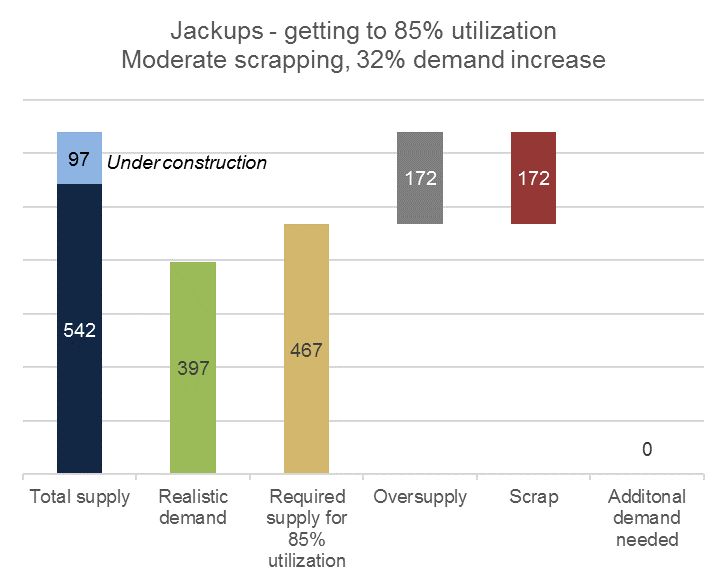 Semisubs don't look too bad either.  The current supply of 163 semisubs is equal to their all-time demand high of 163, but demand would have to increase by a less realistic 130% to reach the current required supply of 137 rigs.  That said, if you assume that semisub demand increases by around 50% (or 107 rigs), then only 38 semisubs (out of a potential scrap pool of 65 rigs) must be scrapped to reach 85% utilization.

If all 65 old semisubs are scrapped, then demand only needs to increase by around 20%.

And if you look at harsh environment segment specifically, the numbers look even better as we’ve noted in a previous article. 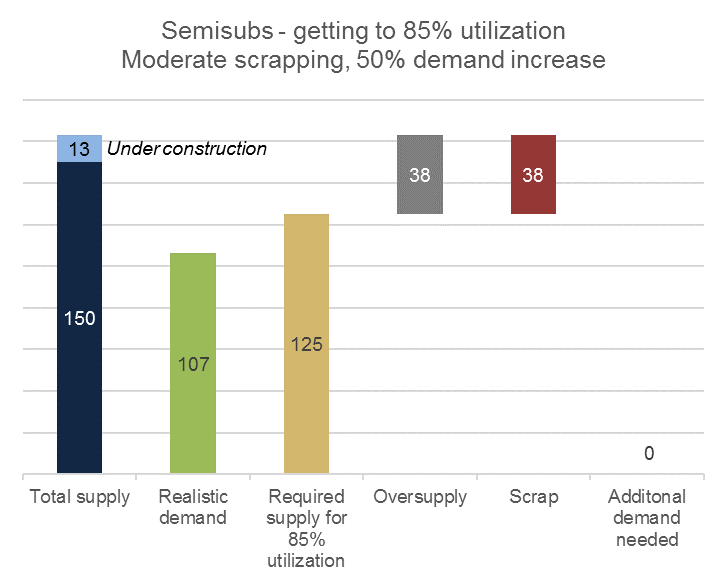 Drillships, however, have the most difficult path to 85% utilization.  An increase in demand of 46% is needed to reach the all-time demand high of 86 rigs, but not even demand at this level would be enough to cope with the extreme overbuilding, and subsequent oversupply, of 6th and 7th generation drillships.

We don’t see demand for drillships increasing beyond its all-time high due to the limited number of deepwater programs expected over the next few years.  Areas such as Brazil, Mexico, and West Africa will add to demand, but a 46% demand increase is still far from conservative.  Nevertheless, if we assume 46% demand growth, then 41 drillships must be scrapped to reach 85% utilization.  After aggressive scrapping over the last three years, there are only 15 drillships either built before year 1990 or before year 2000 and are cold stacked.

This means that 26 (41 total minus 15 old) modern drillships will have to be scrapped (in addition to the 46% assumed demand increase) for the drillship market to regain a state of health. 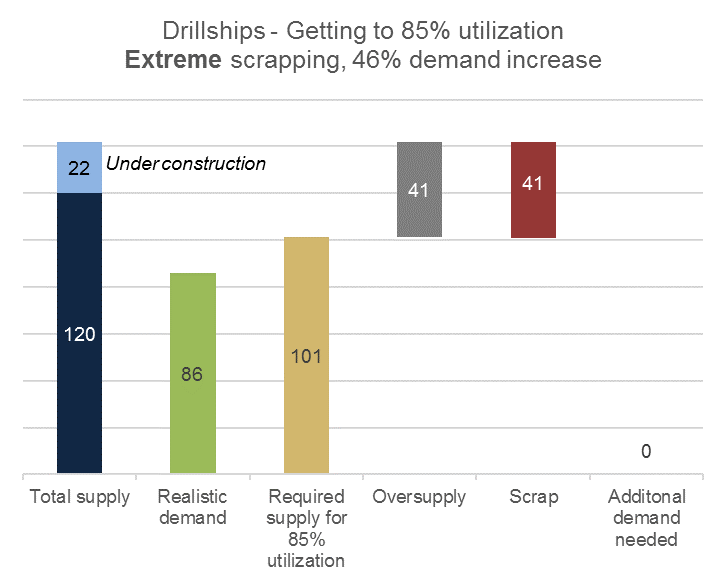 We can run scenarios until our models explode, but the fact is that, while there’s a lot of work to be done to get the rig market back up to 85% utilization, the path forward is achievable.

Rig owners have control over the supply side.  A realistic approach to fleet attrition would go a long way toward solving the problem of oversupply.

At the same time, increasing drilling activity driven by higher oil prices and the weak, unsustainable capex programs pursued by oil companies since 2015 which will likely need to be compensated for over the next few years will help on the rig demand side.

We don’t know exactly when we’ll see 85% utilization across the rig market.  But we expect that the jackup and semisub markets will balance first.  And once someone decides to scrap the first modern ultra deepwater drillship, we’ll know we’re getting close.