It’s already mid-2017, and although the market is marginally better, few contracts exist and low dayrates and shorter duration persist.

Analysts and industry experts have been gradually pushing off their recovery prognoses since 2015. At that point, the market was already well on its way to its worst period of falling activity ever.

Short, temporary cuts in offshore capex by oil companies have now turned into being less temporary than initially thought.  But the mantra these days is that most offshore projects can survive at an oil price of at around $50 per barrel.

So why isn’t rig contracting activity improving faster?  Why are the contracts that are agreed so short?  And when and where will the market improve?

There are a lot of variables behind these questions, but rig contracting activity data tells us something.

Rig contracting activity has declined for seven years in a row, but not all of that is problematic

Contracting activity has fallen continuously since 2011. The market, however, didn’t turn negative until closer to 2015.

Rig utilization over the same period only started falling in 2014. So, while contracting declined, utilization stayed high. 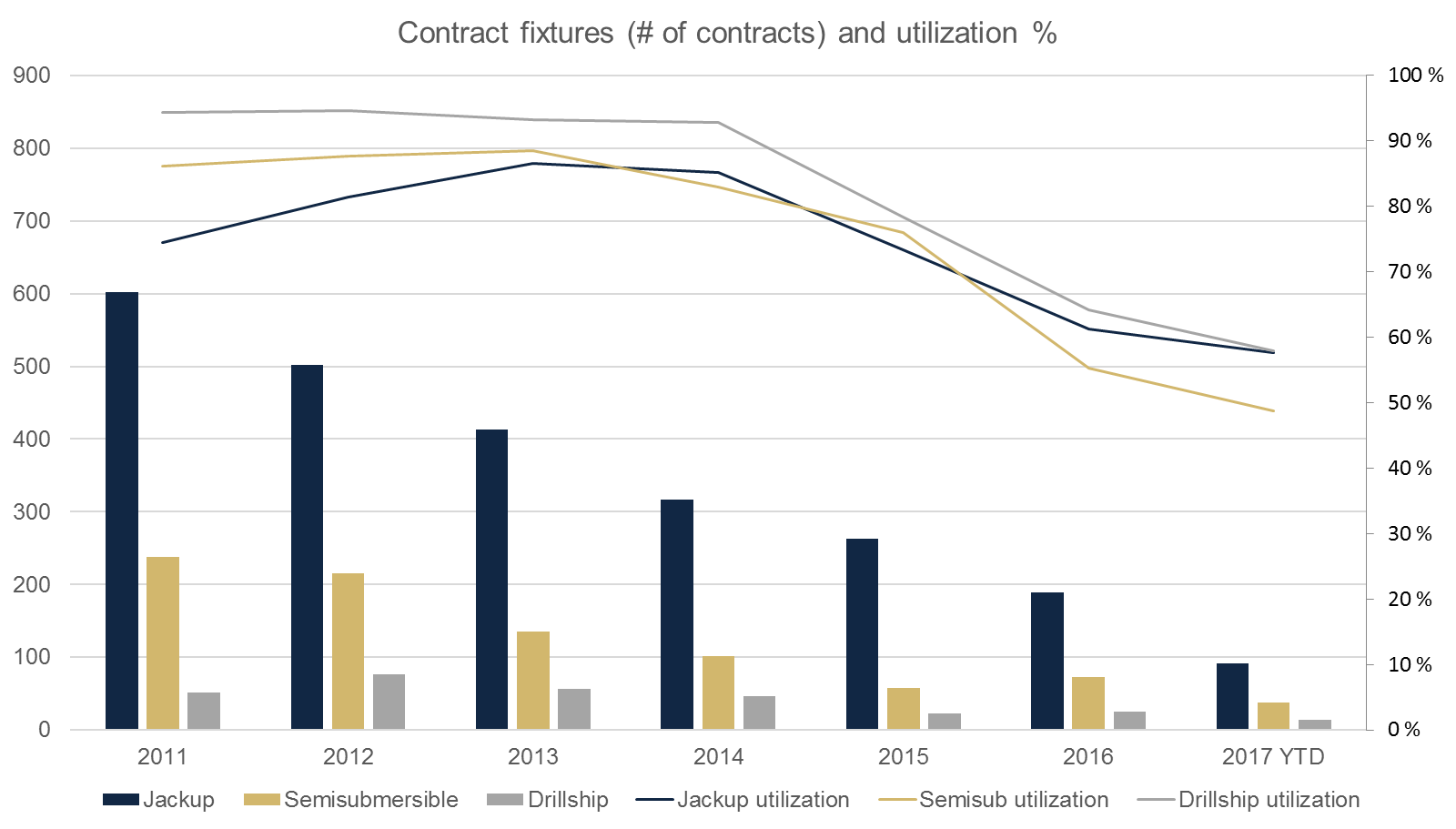 When the oil price fell, and stayed low, contract durations started to fall as a result of oil companies' cost cutting programs combined with rig owners' unwillingness to lock in long-term rates at low levels.

And that’s where we are now: low contracting activity, low dayrates, and short contract durations.

Current average duration for drillship contracts is at around 200 days compared to over 1400 days in 2012. While semisubs have fared better, average contract duration is down over 50%.  Contract duration for jackups has stayed steady, but there’s a larger variance in durations in this segment: most are short and a select few are very long (specifically North Atlantic Drilling’s two ten-year contracts with ConocoPhillips in the North Sea ). 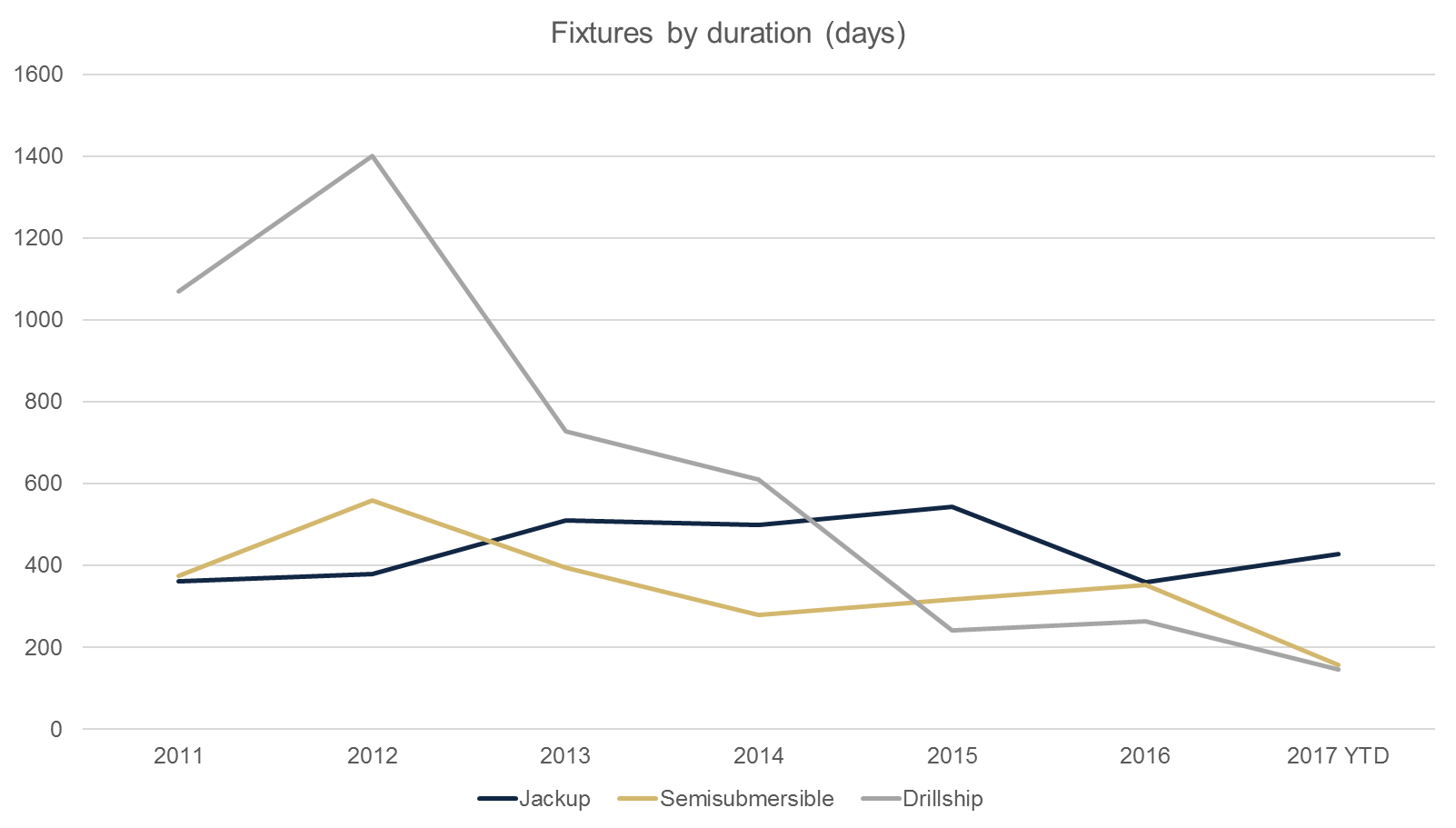 But this year won’t be worse than last year

Based on activity through today in 2017, we look to be on pace to remain at or above the contracting levels we’ve seen during the past two years (depending on rig segment).

Jackups which can operate at more than 300ft will at least maintain the same activity compared to 2015 and 2016.

Harsh environment semis already have nearly the same number of fixtures in the first five months of this year than in 2015 and 2016. Although this segment contributes little volume-wise to the overall market, there are fewer rigs in this class, less oversupply, and higher barriers to entry (high build cost, stringent technical requirements) which gives an advantage to those who are in it. 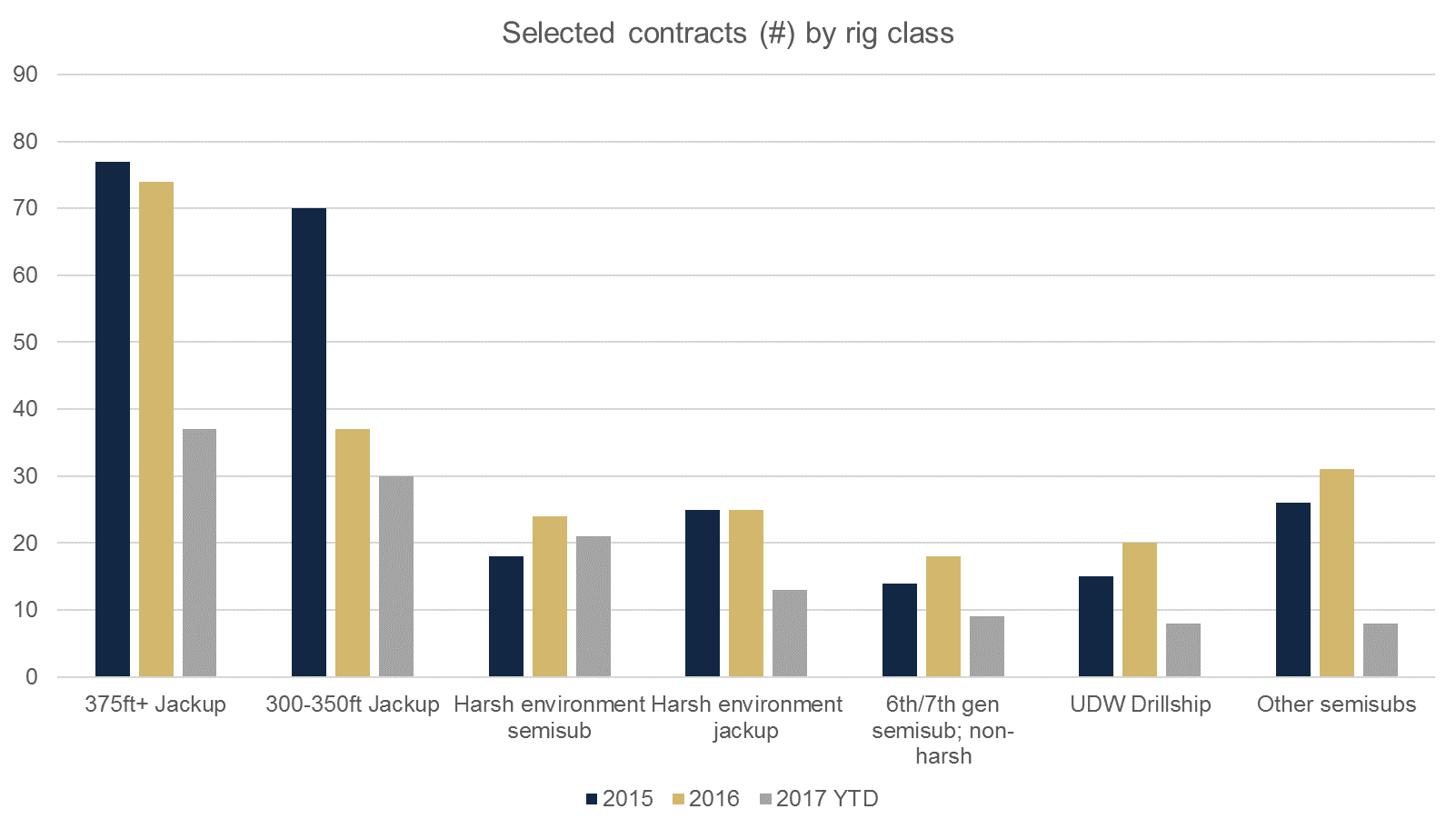 Compared 2015 and 2016, highest dayrates are generally stable to lower across the board apart from the midwater harsh semisub class (which has improved) and non-harsh semisubs and UDW drillships (which have fallen by over 50%). 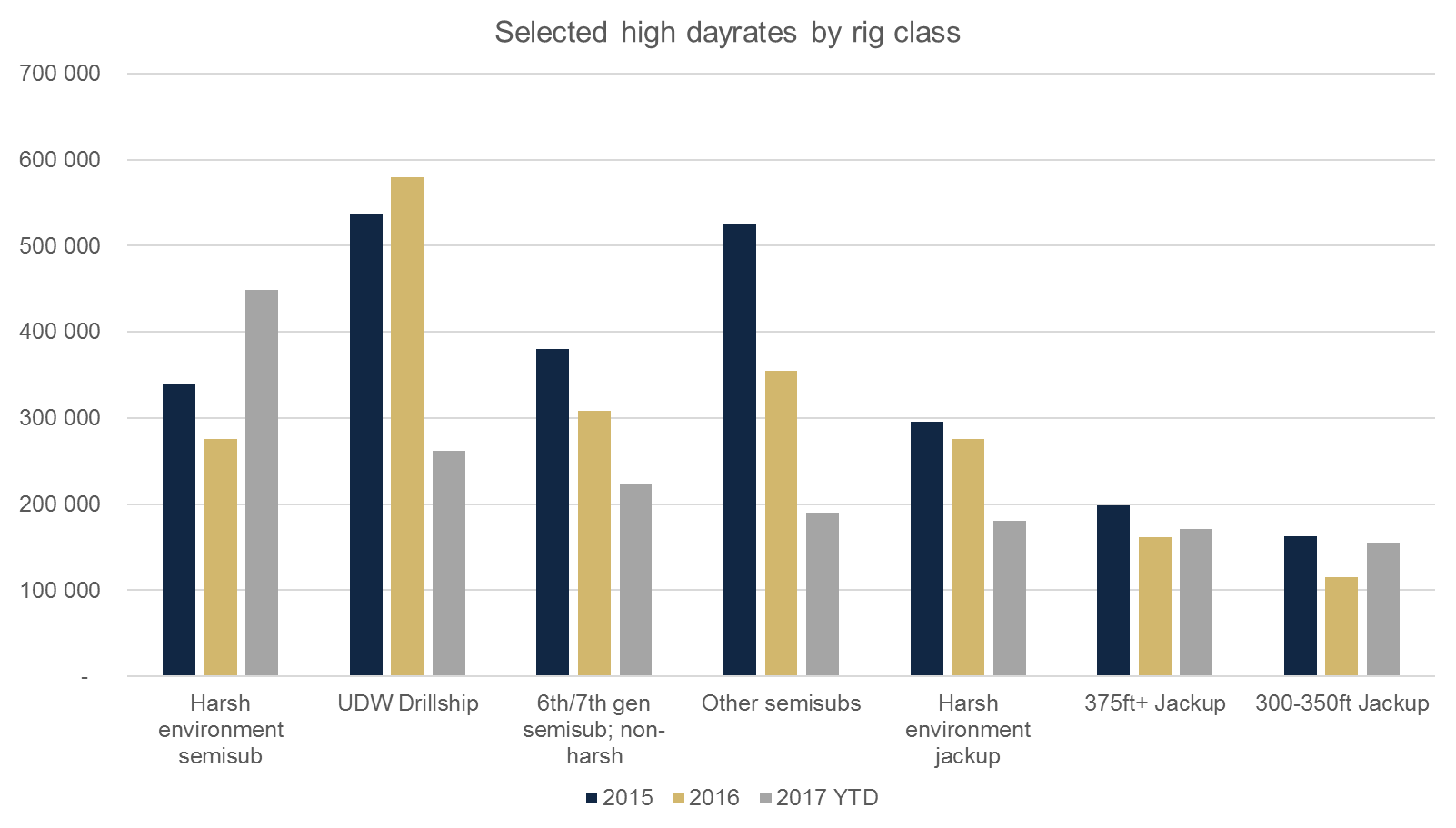 A regional breakdown shows that most of the continued rig demand decrease for jackups since 2015 has come from the Middle East.  This region was responsible for over one third of the jackup fixtures in 2015, and with several contracts up for renewal and new requirements from oil companies expected to be released over the next 12–24 months, we see this region as a contributor to higher utilization for jackups.

Demand from Southeast Asia is also expected to pick up as operators take advantage of lower rates and high oversupply in the region. 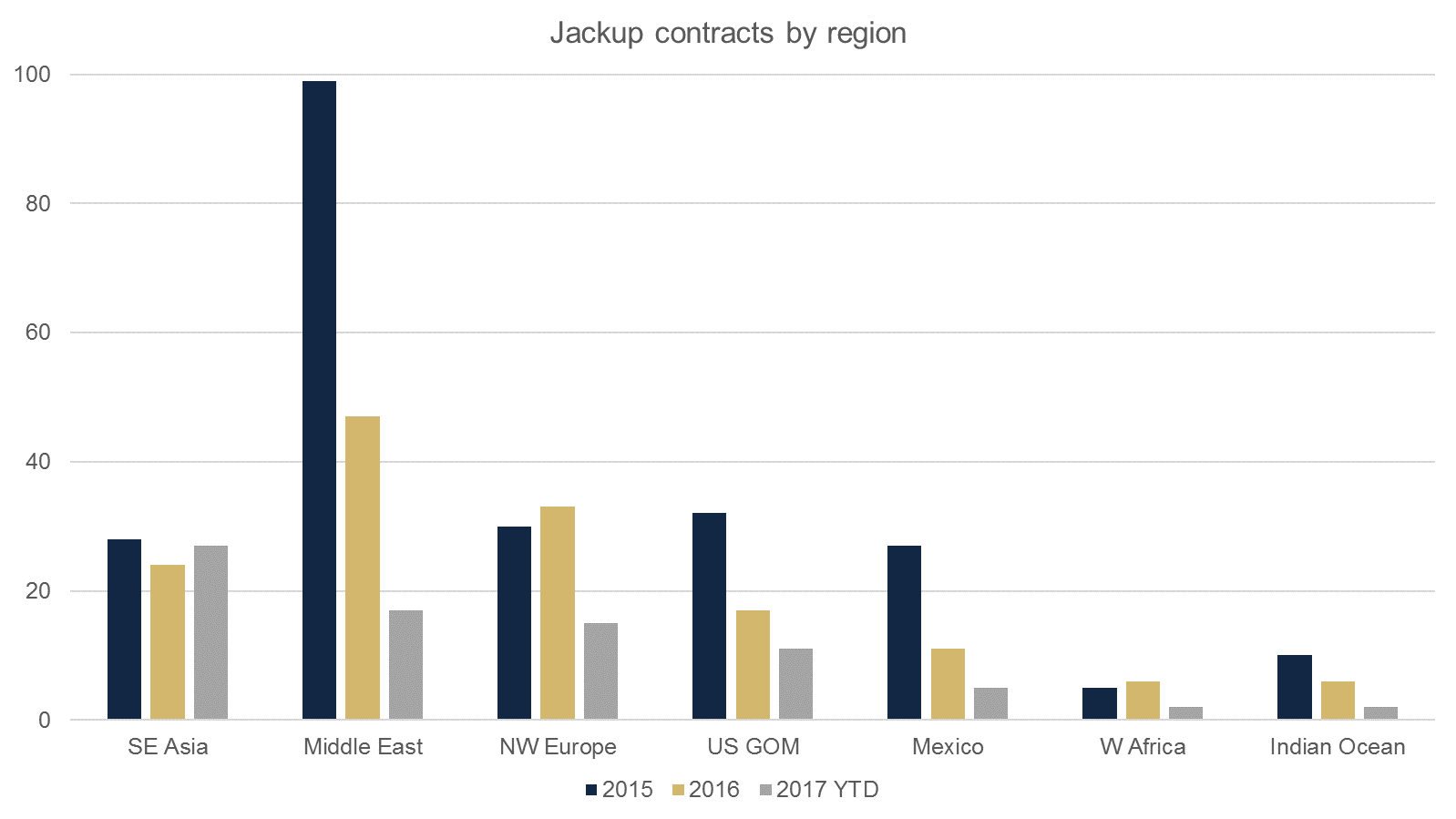 For semisubs, the North Sea will be key in maintaining and building on utilization.  Other regions such as the US Gulf, Brazil, the Far East, and Australia may help support that.  Brazil, which is not expected to grow in the near term, will experience higher activity once Petrobras and other international oil companies ramp up production in the country starting around 2019. 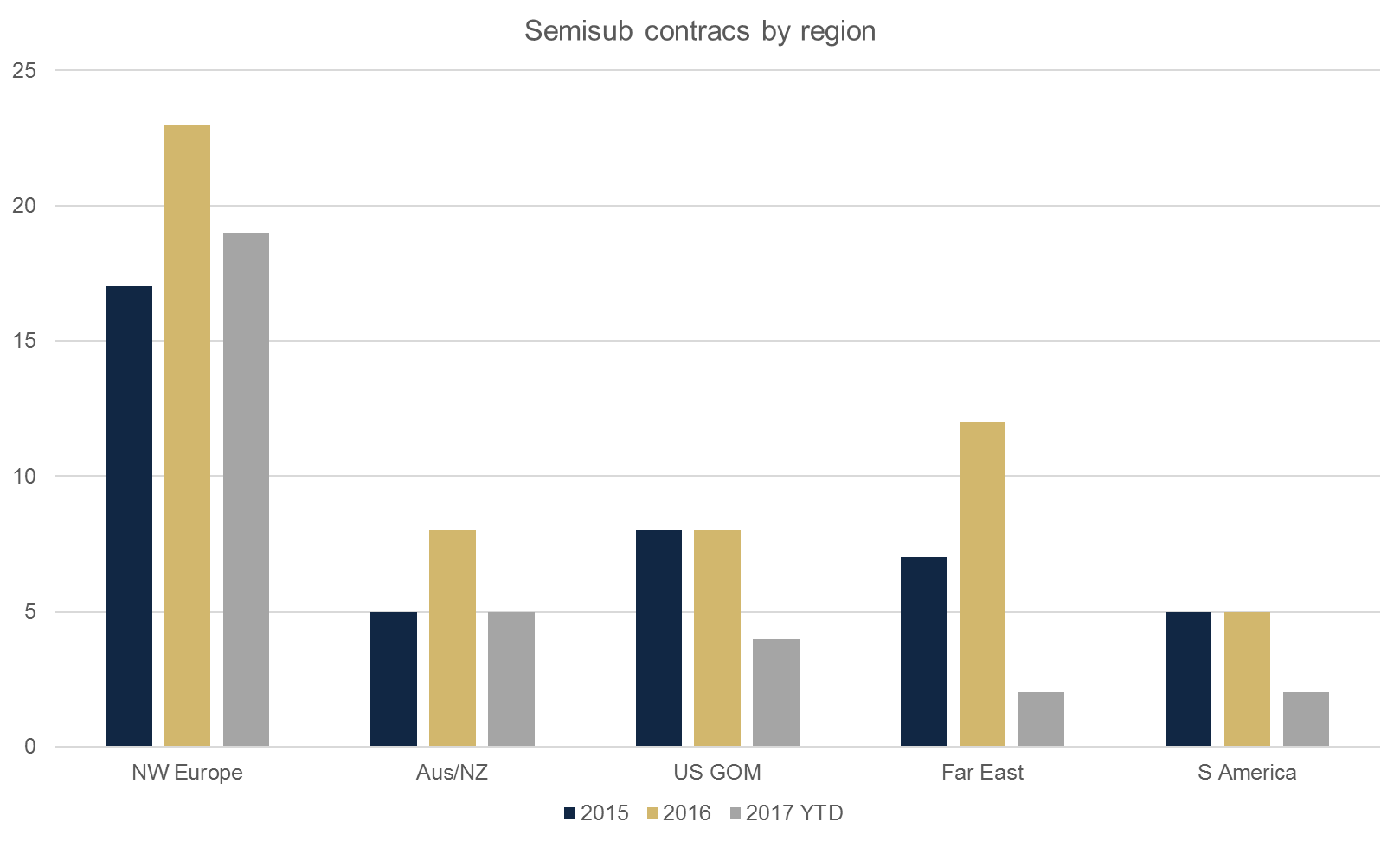 Drillships are likely to suffer long-term.  Eventually, the US Gulf, West Africa, Southeast Asia, and Brazil will see higher demand, but the number of fixtures, for the next two to three years, is unlike to exceed the lows we’ve seen since 2015. 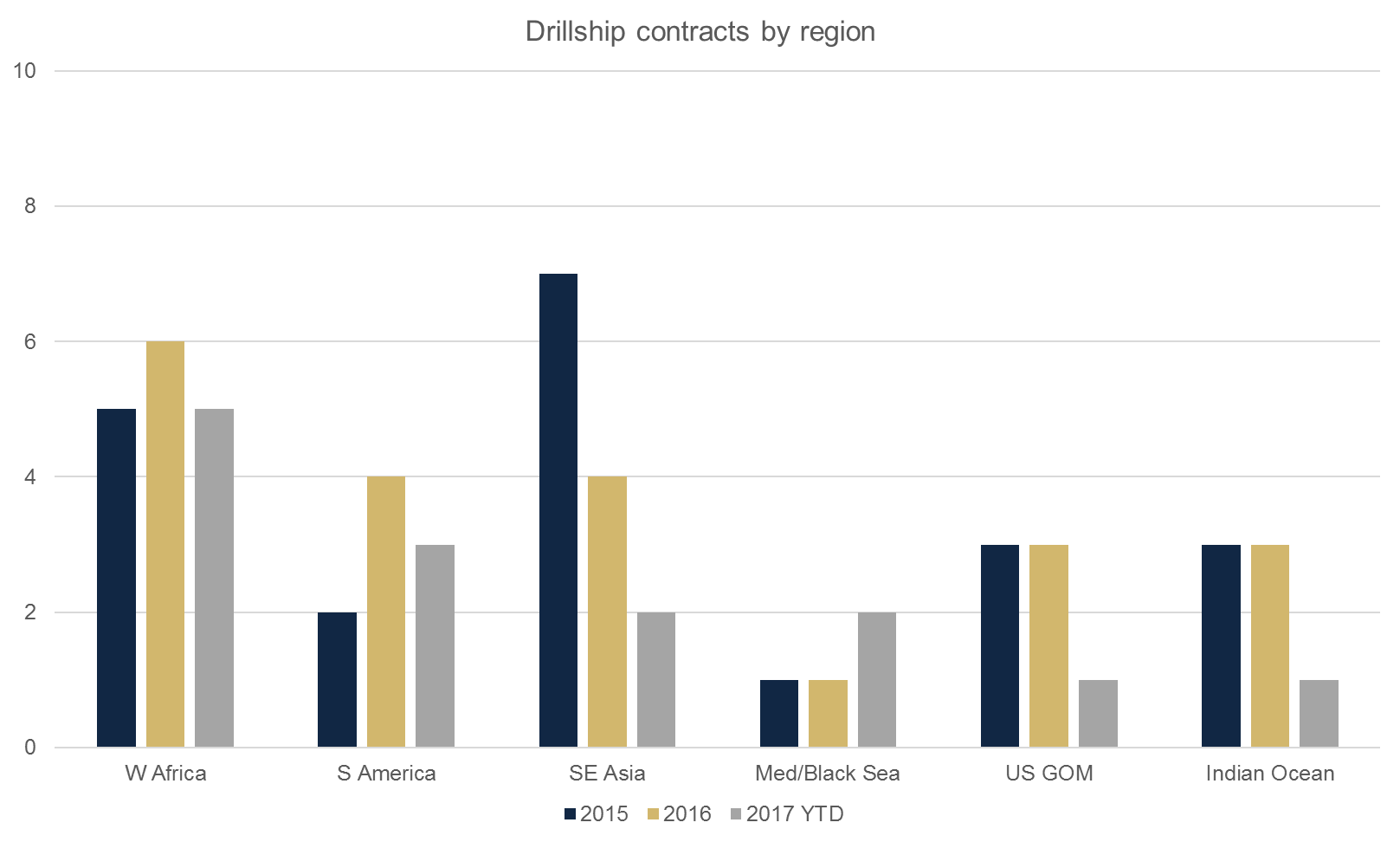 There are already nearly 260 announced or possible rig contract tenders for 2018 compared to 287 fixtures in 2016. Some of these requirements will never materialize, while others (and likely more) will emerge over the next 12–18 months.

The outlook by region points to Southeast Asia, the North Sea, and West Africa as key areas for next year.   The Middle East will also strengthen as we move toward 2018. While requirements appear high in Australia, we see most contracts there being pushed back until oil moves into a higher price band (due to high costs). 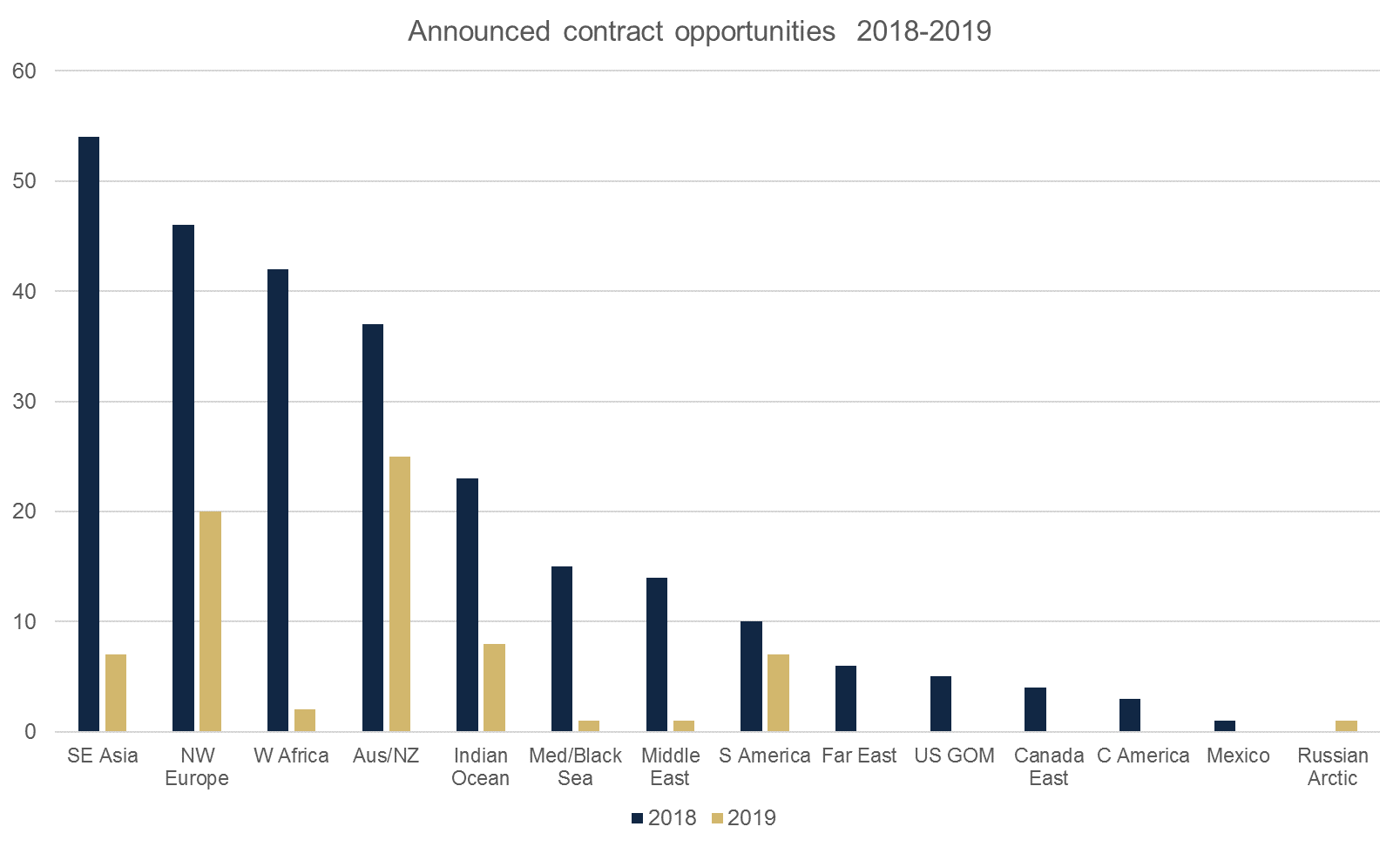 Rig contracting activity won’t decline further unless something catastrophic happens with the oil price due to onshore production and consumer demand.  Contracts, however, are likely to stay short until efficiency plans are fully implemented by both oil companies and rig owners which will allow the former to sanction new long-term projects and the latter to operate indefinitely in a new, lower-average dayrate environment.