The North Sea, and particularly the Norwegian Continental Shelf, currently leads the market recovery scenario.  As we’ve noted several times over the past few months, the midwater harsh environment segment will see more improvement than any other in the short and medium terms.

Out of approximately 1,000 offshore rigs, there are only 43 semisubs built to operate on the NCS (including seven under construction).  A rebound in this segment isn’t going to save the offshore market in its entirety, but for rig owners who have (or can acquire) premium harsh environment semisubs, the NCS is an important component in today’s difficult quest for backlog.

Demand for semisubs in the North Sea has fallen from 27 to 12 rigs since 2014. With a supply of 36 rigs and seven rigs under construction, the midwater harsh environment segment may not stand out amongst the rest of the oversupplied market at first glance.

But there are two significant factors driving a unique scenario for recovery:

Assuming the oil price remains stable at over $50, exploration and production drilling is set to increase.  This week, Statoil received approval to drill in the Barents Sea, and operators such as Lundin, Total, BP, and OMW will initiate programs in large areas of Northern Norway and the Barents Sea over the next 12–24 months.  A licensing round later this year for a further 34 blocks will lead to the largest expansion seen to date in the area.

Along with that, there are currently more than ten requirements in Norwegian fields further to the south.  And there are another 53 blocks are set to be released this year.

We see oil companies becoming more proactive in contracting rigs at lower rates, and as activity ramps up, rates will start to rise.  As such, demand should return to its average of 19 rigs by 2019 before increasing to 25–30 rigs by 2022.

2)    Premium fleet is much smaller than the total fleet

For a rig to be able to operate in Norway, it must be approved by the Norwegian Petroleum Directorate and compliant for a range of criteria.  Rigs must have sufficient air gap and variable deck load, safety features (free-fall lifeboats, enclosed drilling areas, heat tracing), environmental regulation compliance, single man cabins (all with a window), and the list goes on.

While there are 43 NCS-compliant semisubs, we consider only 24 to be competitive. 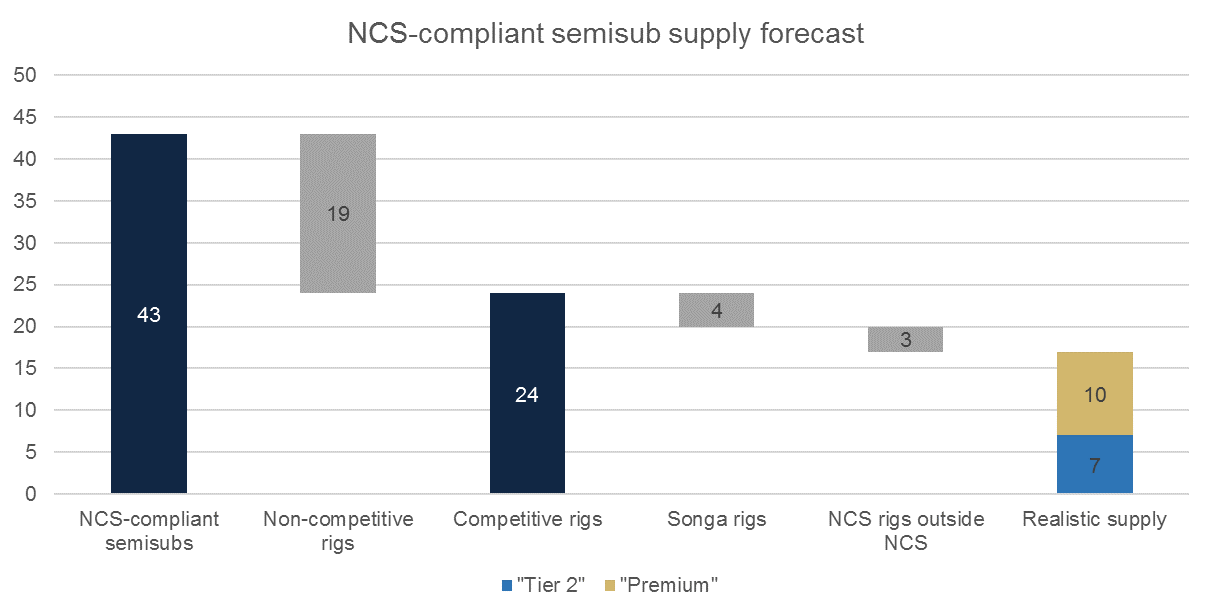 There are 19 rigs expected to be retired in the short to medium term as they are older, not able to operate according to oil companies’ new efficiency and safety requirements, or would incur economically unfeasible reactivation costs from cold stacked mode.  Some of these rigs will be scrapped; some are expected to leave the Norwegian sector for the UK or other markets where they may still be able to find work.

Of the 24 competitive rigs, the four Songa Cat-D rigs for Statoil are contracted beyond 2022. A further three rigs are not working on the NCS and will likely stay outside of Norway due to continued demand in their current locations.

This leaves a realistic supply of only 17 rigs for the NCS.

Beyond that, seven of these 17 rigs are expected to be less desirable for oil companies going forward.  Preferences are shifting toward 6th generation rigs with high specification drilling equipment and a high degree of winterization (for Northern Norway and the Barents Sea).  The seven rigs which do not meet these criteria will likely find work as utilization rises, but they will be at a disadvantage.

As such, only 10 premium rigs exist for future drilling on the NCS.

And that is why we’ve seen strong buyer interest (and pricing) for the four premium rigs under construction which are also now controlled by their shipyards after a series of cancellations by their owners.  The West Mira and Bollsta Dolphin were snapped up by Northern Drilling for $365 million and $400 million earlier this year.  West Rigel and Stena Midmax – which Stena cancelled last week – will likely be sold during the coming months as owners look to take advantage of the potential undersupply of premium NCS rigs.

NCS semisub market may be undersupplied

With only 10 premium rigs and seven “Tier 2” NCS-compliant semisubs combined with high barriers to entry due to high build cost for NCS rigs and the virtual impossibility for owners to retrofit a rig for NCS compliance, we see demand matching – and possibly exceeding – supply as we move toward 2022. We can expect to see more contracts, higher dayrates, and rising asset values in this region which may spill over to other semisub segments.