Northern Drilling just announced their first drilling contract award.  The West Mira, the first rig to be acquired by Northern Drilling from Hyundai HI in March 2017 for $360 million, will drill at least six wells in Wintershall's Nova field in Norway starting in March 2020. Northern Drilling estimates the contract value to be $106 million.  Seadrill, who also today entered into a long-term frame agreement with Wintershall, will operate the the rig.

In addition to the firm six wells, Wintershall has options for up to ten follow-on wells which could keep the rig working until early 2022. There's also an early commencement option which allows Wintershall to start drilling as early as Q3 2019.

Northern Drilling says that dayrates for “parts of the optional period will be based on a market indexed rate which enables NODL to benefit from the expected tightening of the harsh environment market with a drilling rig well positioned on the NCS.“

While the base dayrate is still unconfirmed, assuming that the six-wells take one year, the dayrate comes in at around $290,000 (but is likely closer to $300,000 and based on a slightly shorter firm period).  This would be below the recently-awarded contract to the Deepsea Nordkapp (previously Stena Midmax) at around $325,000 per day, but higher than other awards in December last year to the Transocean Spitsbergen ($285,000), the West Phoenix ($275,000), and the Deepsea Stavanger ($287,000).

This is a big win for Northern Drilling who, as first mover in the distressed harsh environment semi market, acquired their two rigs at prices between $100–145 million less than the other two Norway-compliant CS-60s, Deepsea Nordkapp and Transocean Norge (previously West Rigel).

Contracting activity in the North Sea, and especially Norway, has taken off lately.  According to Bassoe Analytics, 12 harsh environment semisub contracts have been awarded since January in Norway alone.

Not counting existing contract extensions, this adds up to nearly seven years of drilling work. 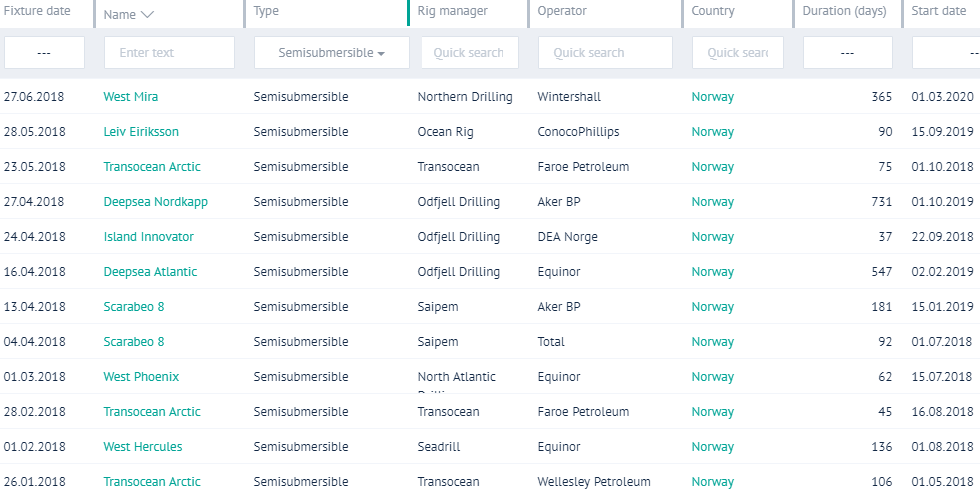 Now, only two newbuild, and previously distressed, CS-60s are available.

And more awards are expected.  The big one is Chevron's Rosebank tender for a 5-year contract in the UK which has now been resurrected.  The Bollsta Dolphin, Northern Drilling's other semisub, had originally secured this work and is seen as a main contender for the job.

Look for rising dayrates as new-rig capacity in Norway continues to be eaten up by oil companies.