The global pandemic and oil price crash continues to stifle the offshore rig market, but when shallow-water demand returns national oil companies will dictate the pace.

Over the past four months we have been flooded by news of just how badly the offshore rig market has been hit during the double whammy of the Corona pandemic and oil price fallout. We witnessed what seemed like a never-ending wave of contract cancellations coupled with increasing numbers of contract options being declined, along with suspended drilling operations and a surge in deferrals to campaign start-ups. In addition, award activity has almost dried up, resulting in drilling contractor backlog quickly withering away.

Cancellations and suspensions have come from a mix of companies from small independents to supermajors, and almost all regions have been impacted in some form. However, as can be seen from Figure 1, there are currently several areas standing out as having higher levels of activity despite these challenges. These regions, which include the Middle East, Far East, India, Mexico, and Latin America, all have one common denominator – a prevalence of national oil companies (NOCs).

Now, this doesn’t mean that these areas and their NOCs haven’t been doing their fair share of terminating offshore rig deals, just not to the same extent as International oil companies (IOCs) and smaller independents – plus these regions also typically have some of the largest fleets. As can be seen from Figure 2 IOCs have, so far, cancelled over twice the amount of rig time that NOCs have, however NOCs have handed out more suspensions than the IOCs.

As already mentioned, new awards have been few and far between since March and IOCs and independents have actually awarded 20 deals in comparison to just 12 from the NOCs. However, NOCs may have made fewer deals since the latest market slump but they have still secured more rig time than any other operator type. 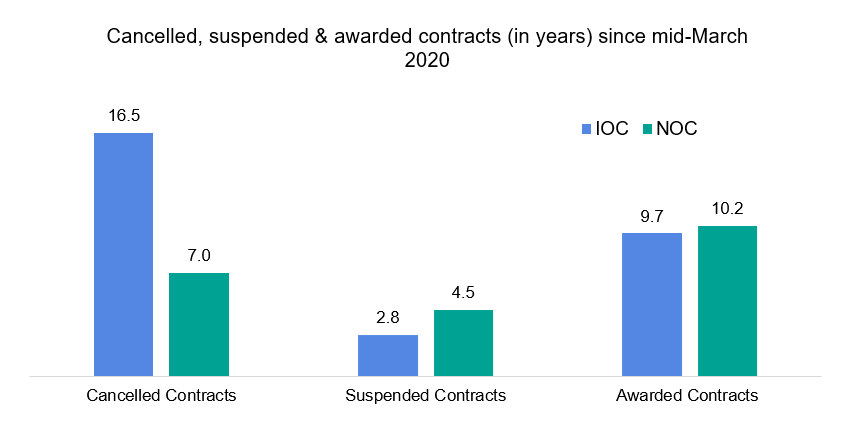 During the last downturn, which took hold in 2014 and only started to gather recovery momentum during 2018, several trends were witnessed in the offshore rig market. One of these was a quicker and fuller recovery in the jackup segment in comparison to the floating rig segment (drillships and semisubs). And why was this? Well, excluding Petrobras in Latin America, most of NOC's operations are in shallow waters with the likes of Saudi Aramco, Pemex, ADNOC and ONGC all mass jackup users.

As can be seen from Figure 3, a total of 777 years of backlog was awarded between 2018 until July 2020, consisting of 430 years from the NOCs. Jackup awards account for 587 contract years and 75% of all backlog awarded. Nearly two out of every three jackup awards came from an NOC. International and smaller independent oil companies continue to lead the way in terms of deepwater-contracting activity, but because of its often high-capex nature and differing interests of such companies in comparison to NOCs, much fewer awards were made in this segment during the two-year interval.

According to Bassoe Analytics, the top five operators responsible for adding the most backlog over the past two years consist of only NOCs, with Saudi Aramco far ahead of the curve. The top four companies are virtually jackup only operators, however CNOOC has more of an even mix of shallow and deepwater rig time. There are various reasons behind this trend of hefty rig contracting activity amongst NOCs including a strong focus on maintaining domestic production, offsetting field depletion, being less dependent on imports and meeting state budgets.

Figure 4: Top 5 companies with highest numbers of rig fixtures in rig years between July 2018 and July 2020 (data from Bassoe Analytics)

On last check, global competitive utilization within the jackup market has fallen from 78% to 67% between February and July 2020, while floating rig competitive utilization has decreased from 60% to 50%. That is one of the sharpest drops recorded in global rig utilization and it is not yet known when we will reach the trough in this cycle. There has been a slight increase in market optimism due to a bit more stability in the oil price, which could well spur E&P companies to start opening wallets again; however, a lot still hangs on how the Covid-19 pandemic plays out.

Although demand for offshore rigs is somewhat dormant at present, it is still there awaiting the right market conditions and when the time is right you can bet on national oil companies driving jackup demand once again.