The drillship market has sucked for years. Now it’s getting interesting.

One of the questions I get asked most often is: what do you think about the market for deepwater drillships?

We’ve talked a lot previously about our sunny outlook for higher-specification jackups and midwater harsh environment semisubs.  And although we’ve had a few good things to say about deepwater here and there, the drillship market has reached a point where it deserves more attention.

So here’s what we think.

Looking at rig contract data from the Bassoe Analytics offshore rig database, there are 114 delivered drillships and 20 under construction.  We consider 13 ships to be non-competitive (older than 2000, cold stacked, or overdue on their latest special survey).

Competitive utilization stands at around 55%, with 56 rigs on contract and 45 stacked.

Market dayrates have gone from around $600,000 in 2013 to $150,000ish today.   With huge capital investments and the most dramatic fall in dayrates of any rig type, the drillship market has been dealt a particularly crippling blow.

Now let’s talk about all the good stuff.

There are fewer competitive rigs than you might think

Up until around 2007, there were only around 20 drillships which could operate in water depths over 7,500ft.   In a ridiculous example of fleet expansion, over the next seven years, more than 110 orders for newbuild ultra deepwater rigs would be placed.

As with the rest of the offshore fleet, nobody really knows how many competitive drillships are in the market today.  Unlike jackups and semisubs, the supply of old rigs in the drillship fleet is limited.  If we take out the rigs we consider non-competitive, we’re still left with 117 new rigs (121 drillships in total).

Keep in mind that no more than about 85 drillships have ever been on contract.

So it seems there are too many 6th and 7th generation drillships – even if you think we’ll return to a 2013-type environment.

Sounds like a bad situation.  But it’s not that simple.

As dayrates for drillships remain low, more rigs will become non-competitive with respect to initial invested capital plus capital required for stacking and reactivation.

If you’ve got a five-year old drillship which has been poorly stacked for two years or more, you could end up having to spend $100m and months of work (as we've previously discussed, nobody really knows until they start this process) to get it back into drilling condition.  You can’t compete until all other “better” rigs are contracted first.

Another point in favor of reduced competition in the drillship market comes from the newbuild semisub fleet.  Although there are six newbuild deepwater semisubs, they’re also harsh environment rigs.  With all the focus on demand growth in the North Sea (especially the Barents Sea), it’s unlikely these rigs – which could compete with drillships in some cases – will enter the deepwater market anytime soon.

While contracting activity for drillships is still low, most major drilling contractors note a strengthening flow of inquiries and tenders from oil companies.  As demand grows for rigs which are ready to work, the pool of competition these rigs have to deal with will shrink.

Break-even prices have come down by over 20% over the last year or so, with many large deepwater projects able to work at oil prices below $50 per barrel.  Shell, for example, recently announced that the Vito development in the US Gulf has a break-even price of less than $35.

At the same time, the oil price is pushing $80 per barrel, and oil companies are turning back to deepwater as a sustainable supply source again.

As we wrote earlier this year, we expect to see deepwater’s largest market, Brazil, along with countries like Guyana and Argentina, double the number of rigs on contract over the next two to three years.

Large projects in West Africa, Egypt, the US, Mexico and Southeast Asia from operators like ENI, Tullow, Shell, and Total will also contribute to higher demand and could lead to material increases in rig count toward the end of the decade.

By that time, demand for deepwater drillships should push up toward 75 rigs which would imply a required supply of around 90 rigs for 85% utilization.   Assuming supply reduces to around 100–110 rigs, dayrates should increase toward $300,000.

But wait, can drillship owners make money off $300,000 dayrates?

Yes, they can.  And they will.

The problem is that most newbuild drillships were ordered at prices of around $550 million.  After delivery deferrals, some owners are in the hole for over $700 million for their newbuilds (if they ever take delivery of them.)

Based on that, there are three types of drillship owners who will be just fine in the new, if slightly less extravagant, era of deepwater drilling:

There could be some overlap in each group, and we assume that all successful owners properly maintain their rigs.

So unless you’ve either paid down debt to sustainable levels via legacy contracts, restructured, or acquired rigs at low values, you’re not gonna make it.

We didn’t say everyone would win in the deepwater market.  But if you can get yourself into one of these three groups, you'll survive (although you may have left a wake of financial destruction in your path on the way there).

Over the past few weeks, we’ve seen five drillship cancellations: four from Seadrill (at Samsung and Daewoo) and one from Ocean Rig (at Samsung).  Construction on the Ocean Rig drillship was never started, but the four Seadrill ships are now part of the list of distressed assets which need to find new owners.

There are now at least six distressed drillships in the market.  Two of them have been for sale for years.  So far, there’s been no market-clearing price discovery.

Bassoe Analytics currently puts value ranges for the top end of the delivered drillship fleet at $271–300 million, around half of original newbuild prices (and on an upward trend). 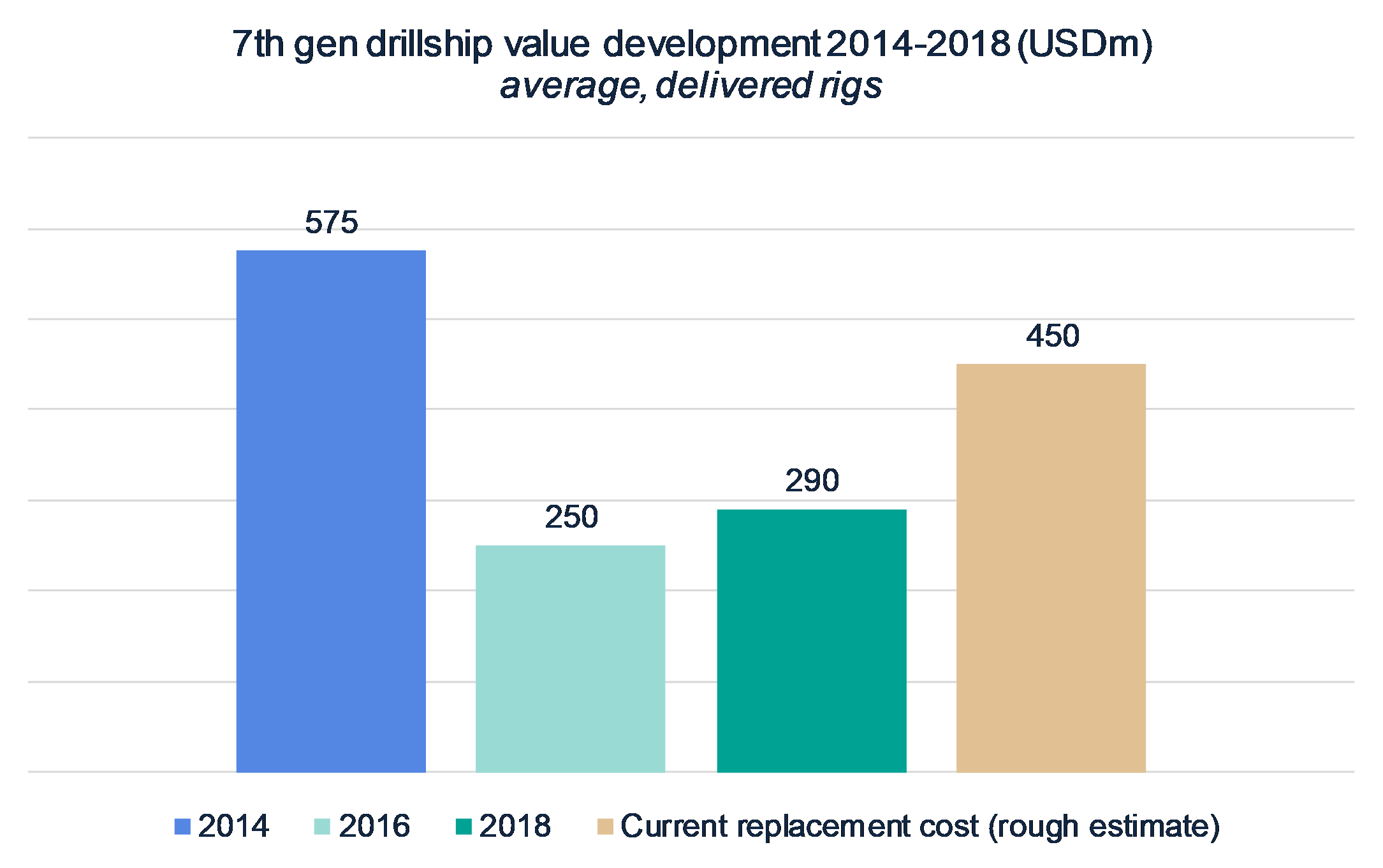 Although we haven’t seen any transaction activity on the drillship side yet (apart from Ensco’s acquisition of Atwood in 2017), we think it’s coming – especially for the distressed newbuilds.

Nobody knows where we’ll end up on price yet, but we’re starting to feel a pulse in deepwater which we haven’t felt in a while.  And it’s at these times when the interesting stuff starts to happen.