Someone other than Borr has finally acquired a newbuild jackup. And other established rig owners are likely to follow.

After a lot of speculation and rumors, Noble confirmed today the acquisition of a Gusto CJ46, originally ordered by China-based Petrolor Oilfield Services (who later walked away from the deal) from PaxOcean in Graha, Indonesia for $93.75 million.  The yard has agreed to finance $60 million of the purchase price over four years.

Noble has already secured a three-year plus one-year option contract in the Middle East which is expected to commence in early 2019.

Did Noble just get the deal of the year so far?

The CJ46 was the speculative rig player’s design

The GustoMSC CJ46 was one of the less prominent designs in the mini newbuild wave that hit in 2006–2008.  But PaxOcean (formerly Drydocks World’s Graha yard) built four of them which were later purchased by UMW (Velesto) and Saipem.

Years later, when speculative jackup building became a trend, two more were ordered by Petrolor for around $200 million and another 25 were ordered at Chinese yards.  Nearly 20 of them are still sitting there today waiting for something to happen.

Strangely, and likely due to their speculative-owner history, the CJ46s were – perhaps unjustifiably – seen as inferior.  Their designer, GustoMSC is known as one of the premier rig designers in the world who has a partnership with Saudi Aramco for twenty newbuild rigs for ARO Drilling. 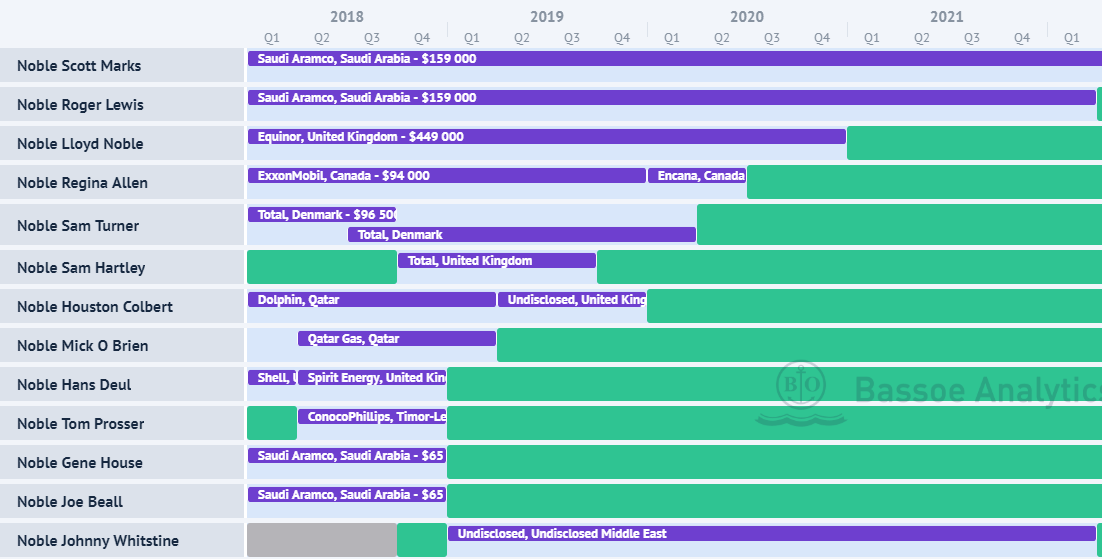 But they’ve got two lower-spec old rigs, the Noble Gene House and Noble Joe Beall which are 1981-built Mitisui 300Cs.  They’re both working for Saudi Aramco until November.

Noble hasn’t disclosed which operator they’ve won a contract with in the Middle East, but there’s a chance it could be with Saudi Aramco.  If that’s the case, the plan could be to retire one or both of their old rigs and bring in the new Noble Johnny Whitstine.  Noble also has an option for the second PaxOcean newbuild.

As the first established rig owner to buy a newbuild jackup in over three years, Noble proves that there’s a market for the CJ46s in the Middle East, and these rigs – as the new workhorses – could be the catalyst for a wider fleet renewal process in the region.  Currently, the only CJ46 in the Middle East (excluding Iran) is Saipem’s Perro Negro 8.

Is this the first deal of more to come?

Before Noble’s announcement today, Bassoe Analytics valued the PaxOcean jackups (in drilling condition) at $108–119 million compared to their cost of $93.75 million.

There’s no question that Noble got an awesome deal, but we don't think this translates into lower values for other CJ46s or reduces the values for all jackups.

While you could say that Borr has single-handedly pushed up jackup values since early 2017, we’ve always valued CJ46s lower vs. other, more popular rig designs.

For example, Bassoe Analytics values a CJ46 built in 2015 in drilling condition at $90–101 million.  For a standard KeppelFELS B Class from the same year and with similar specifications, values are in the $130–143 range.  Newbuild high spec rigs (those with 2000 kips hook load) are in the $159–169 range.  But as a new fleet renewal trend among established rig owners starts, value spreads look as if they're about to change.

Noble’s extremely low price is also the result of other variables.  Most importantly, the mid-spec jackup market hasn’t seen a transaction in years, and Noble got the first-mover advantage.  Remember, Borr Drilling acquired their first two (high spec) rigs at $65 million each.  That’s less than half the price of their subsequent acquisitions which started only a few months later.

On top of that, the yard only had two jackups on its books, they’d already collected 15% of the original contract price, and Chinese yards were most likely sellers of their CJ46s at significantly higher prices than $93.75 million.

The only effect this transaction will have on jackup values (especially in the middle of the specification range) is to push them up as Noble proves that there’s a market for these rigs and that established rig owners are ready to buy them.

Are drilling contractors finally realizing it’s time to start buying newbuild jackups?  We think they are.  And they’ll do it without increasing supply because new rigs will displace old rigs (which will go to the scrapyard).