Suddenly there’s a lot going on in the Mexican offshore rig market. So much that it’s confusing. Here’s your guide to what’s happening.

It seems like yesterday that Pemex was renegotiating jackup rig contracts and putting rigs on standby as drilling demand in Mexico plummeted.  Oil production dropped from around 2.5 million barrels per day in 2013 to around 1.7 million bpd currently.

If anyone cared about this, they did nothing about it.

But things have changed dramatically over the last few months.

The new AMLO (Andrés Manuel López Obrador) administration has unequivocally decided that production will rise.  AMLO wants output back up to over 2.4 million bdp by 2024. Production is still falling, and will likely continue falling until new wells come online, so they've gotta make up for more than just the current 700,000 bpd deficit.

That’s an aggressive production boost.  While there are doubts Pemex can make that happen, they’re definitely making the effort.

To get things going as quickly as possible, Pemex has decided to put all their focus on existing shallow-water fields.  That means deepwater is out for now.  They need jackups.  A lot of jackups.

And they’ve started that process already with a massive tendering program.

With all the news that’s been going around about this, we’ll go through what we know and try to clarify the situation.

Keep in mind that things could change.  Contracts have been awarded for the provision of rigs (and drilling services), but not all rigs are confirmed (or secured) yet.

The Pemex tendering process has (almost) come to an end

Earlier this year, Pemex started a multi-phased drilling services tendering process where they would contract up to 15 additional jackup rigs.  The process is broken into four clusters with a varying number of rig contracts available in each cluster.

The award process for each cluster is virtually complete.  The fourth cluster was awarded this week, but may still be subject to closing and approvals.  And there might be a fifth cluster (which we’ll get into later).

The Mexican government is intent on giving this new work to Mexican companies to keep things as local as possible.  This creates a major problem: there aren’t enough Mexican-owned rigs to meet this demand.

Then you have the problem of risk.  The new contracts aren’t based on the conventional rig contracting model where you supply a rig and a drilling crew to an oil company and the oil company is responsible for all the stuff you’ve gotta do to drill and complete the well, including how long it takes to drill it (assuming the rig works properly).

Pemex requires the providers to be responsible for everything – supply vessels, casing, well construction.  They’re basically saying, “Drill this number of wells and tell me when you’re done.”

In other words, the service providers who win these contracts must take all risk except that related to whether or not the wells end up being able to produce oil.

Not a lot of rig owners want to take that risk.

On top of that, the payment terms Pemex gives aren’t easy to deal with.  They pay 20% of the total lump sum price for all the wells to be drilled for a specific contract up front (when the rig is on location) and the remaining 80% is paid upon completion of the wells.

Under these financing conditions, as opposed to getting a dayrate from the oil company, the service provider has to fund most of the cost on their own until they finish their wells.  So the timing of cash outlays won’t match with revenue.  This creates a financing challenge.  And as most of these service providers don’t already have rigs, this model makes it difficult for them to secure rigs from other owners.  In most cases, rigs will be bareboated into the service providers instead of acquired.

We don’t know exactly how this will work, and it’ll likely be different among the winning service providers.

Dayrates are difficult to calculate

As the contracts for each cluster are priced based on the completion of a certain number of wells and all services associated with that, along with the fact that payments from Pemex are 20% up-front and 80% on completion, it’s hard to determine rig dayrates.

Most of the service providers have to bareboat or charter in rigs, so it’s assumed they’ll have to agree to pay a dayrate to the rigs’ owners (while Pemex doesn’t pay them a dayrate).

For rig owners, dayrate estimates seem to be in the $75,000 – $100,000 range for time charters, but the services and crew the rig owner need to provide can make these rates incomparable to standard rig contracts.  For bareboat charters, rates run at about $25,000 per day and standard drilling opex is is around $35,000 per day.

Most of the winners of each cluster contract are groups of companies, or consortia, who will work together to perform all of the services Pemex requires (and split the lump sum prices offered in various ways).   We’ve simplified some of the names here for practical reasons.

Note that most contracts don’t have a defined duration.  The duration will depend on well complexity and the service providers’ performance.  The assumption is that the contracts will last for around 18–24 months.

Here’s the overview by cluster.

There were originally seven contracts among four clusters which allowed for 15 rigs.  The winner of one of the two-rig contracts in Cluster 2, CP Latina, declined their award due to expected well complexity not being in-line with pricing.

So six contracts for 13 rigs have now been confirmed.  Pemex might release a fifth cluster to make up for the two rigs in the cancelled contract, but this is still apparently undecided (and likely to happen only after all the other contracts start).

For the six contracts for 13 rigs which are confirmed, only five rigs have been secured.  And most of the remaining eight rigs will have to be sourced from outside the country.  Most of the uncontracted Mexican-owned rigs in Mexico aren’t suitable either due to specifications not being compliant or ownership and financial issues (jackups previously owned by Oro Negro, for example).

The rigs which fill the remaining slots are likely to be stranded Chinese newbuilds or from other established international owners.  We’ve seen both cases already with Marinsa taking the Jap Driller I from ZPMC and Borr Drilling using two of their rigs (Grid, Gersemi) as part of the consortium with Opex Perforadora.

What will happen to the rig count in Mexico?

The one thing that looks certain is that drilling activity in the country is going to reach its highest point in over five years.  If Pemex is successful with their new contracting concept, then there’s a chance they’ll add more rigs beyond these initial clusters.  Along with that, international oil companies like ENI, Fieldwood, and PanAmerican will add additional demand.

Bassoe Analytics currently shows 23 rigs on contract in Mexico.  By the end of this year, the number is expected to reach 38. That’s up 65% from today. 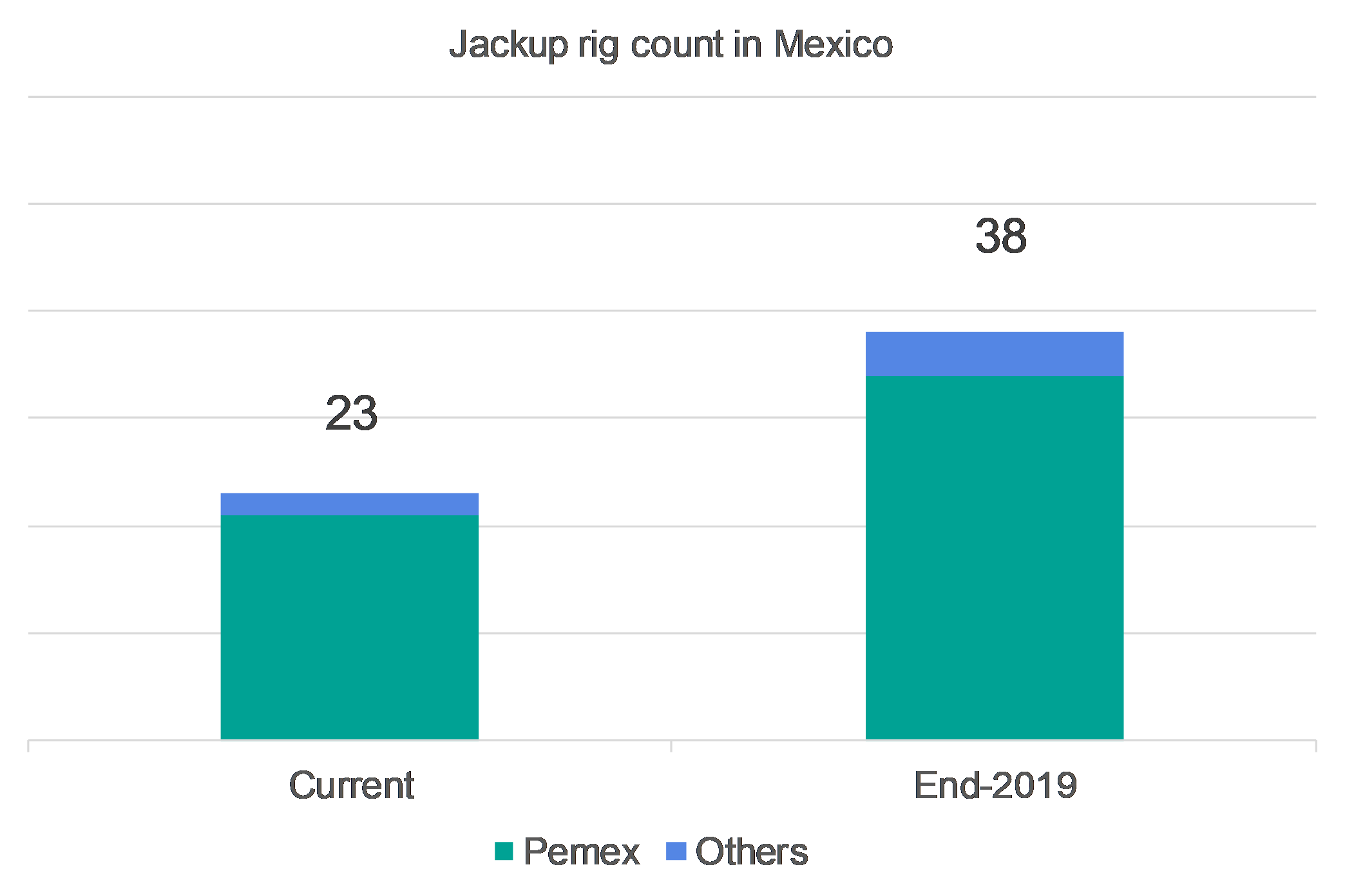 Mexico has become a key region for jackups again.  While the Middle East, North Sea, Southeast Asia, and West Africa continue adding rigs, Mexico is in the process of creating a huge center of activity in the offshore rig market which will have an impact on the global supply of jackups.  The market should welcome this.

You can view the backlog and contract status for all rigs currently in Mexico on Bassoe Analytics here.