Borr’s latest acquisition of nine jackup rigs should be of interest (and possibly concern) to their competitors.

We’ve talked a lot lately about the need for consolidation in the jackup market and the emergence of dominant owners.

Now they’ve taken another large bite out of the supply of stranded newbuild jackups.   This time, they targeted nine Pacific Class 400 jackups at PPL (previously ordered by Perisai, Oro Negro, and the yard itself – and later all controlled by the yard).

In around 10 months, Borr has gone from owning zero rigs (nonexistence) to owning 26 jackups.   They’ve raised money, made money (on paper), and secured conservative amounts of debt financing.   Today, Borr has the ability to move markets; they seem to be in control while other owners – even the major US contractors – either sit and watch or try to react, but never execute.

Borr has a positive view on the premium jackup market, and what they’ve done is what other owners – assuming they also believe in a material recovery in rig demand and dayrates – should have been doing too.  Instead, Borr has been left, essentially unhindered by real competition, to pick and choose rigs and build up one of the largest jackup fleets in the market.

If Borr can do it, why can’t anyone else?

Over the past year or so, all major rig owners have been looking at the pool of jackup acquisition candidates.   In many cases, sellers of rigs (including shipyards), have held firm on pricing.  This has led to large bid/ask spreads for rig values and little transaction activity – apart from Borr’s, of course.

Borr’s usurpation of their competitors’ power in the market started with their first acquisition.   The two Super A Class rigs they acquired during Hercules Offshore’s liquidation process is their best deal by far.   These rigs are the highest valued in their fleet and, at $65 million each, were acquired at around 50% of the cost of all subsequent rigs they purchased.

But Borr has played the market differently than everyone else.  In simple terms, they’ve paid more than others are willing to pay, and in some cases more than the estimated market values of the rigs.

Their competitors could have acted as Borr has, but were either unwilling or unable to do so.  Preservation of financial resources had been so much of a focus during the downturn that most owners lost out on opportunities to Borr.  And now, formerly powerful established rig owners have a major new competitor to reckon with.

Borr’s lower cost base (with no legacy costs and financing commitments) gives them the ability to be competitive at lower dayrates than their competitors.   They’re acquiring premium rigs at discounted values – although their subsequent acquisitions have been less “discounted” – and combining that with efficient operational and financial strategies.   That’s why they’re where they are today.

The PPL deal: buy more rigs for less than it cost to build them

Considering Borr’s business model, we think the recent PPL rig acquisition makes sense for them.   At the time of the transaction, our Rig Valuation Tool put values on the PPL rigs at around $85–96 million (if delivered today).   While these values are much lower than the $139 million Borr paid, Borr won’t be taking delivery of these rigs all at once and they’ve secured five-year debt financing for around 50% of the total $1.256 billion purchase price.

In effect, Borr has purchased forward contracts (with delivery through early 2019) on the rigs.   If you think values for rigs will rise over the next year or so, you can justify paying more than current market values.   And you still secure assets at levels much lower than replacement cost.

We provided our outlook on future rig supply and demand in our previous article.   For the jackup market to be balanced (85% utilization), we think that up to 172 rigs need to be scrapped and that demand needs to rise to 397 rigs.

Borr believes that 171 rigs are already noncompetitive (so it doesn’t matter if they’re scrapped or not) and, more importantly, that only 38 newbuilds will be delivered.

We don’t disagree with the assumption that there are many jackups in the market that are noncompetitive, but unless they’re scrapped, a number of old jackups will remain competitive in places like the Middle East and India especially if dayrates start to rise.   Even Borr has four North Sea jackups built in the 80s and 90s, which, according to their outlook, should be noncompetitive.

Borr also estimates that only 38 of the 83 comparable jackups under construction will be delivered.   There is, however, a risk that if the market improves as we believe it will, it's likely that other owners will attempt to acquire more newbuilds and bring them into the market.  They won’t simply disappear.

Add to this the real possibility that the Saudi Aramco-Rowan joint venture will build 20 newbuild jackups and the number of newbuilds coming into the market could be much higher than Borr’s 38-rig estimate. 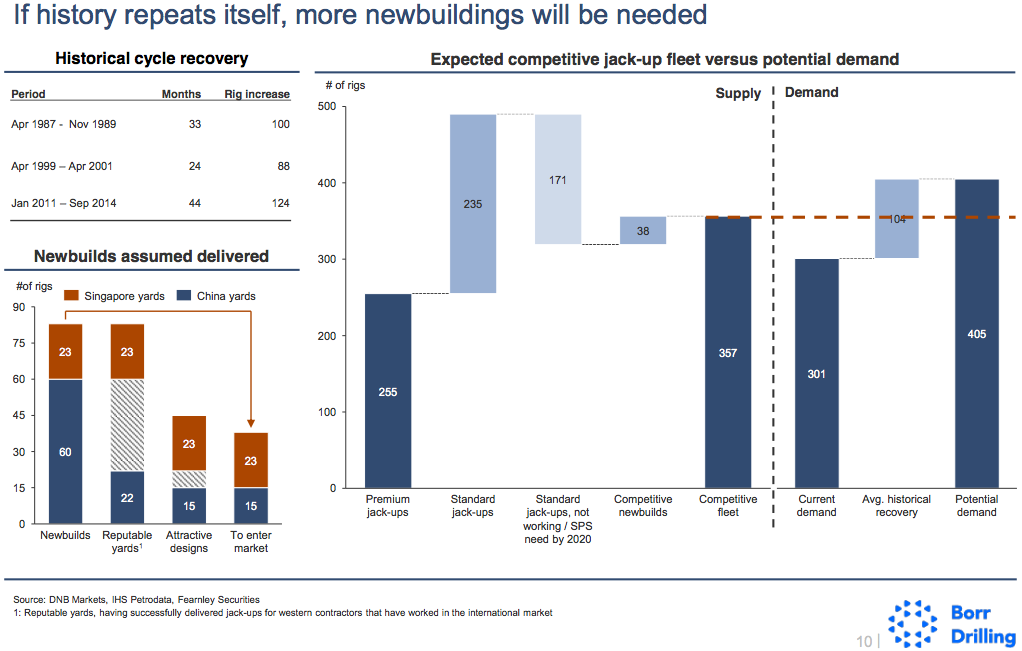 Risks aside, we support Borr’s strategy.   We also believe the jackup market will see much higher utilization, although possibly via a different path.   The competitive landscape in the jackup market may not resolve itself exactly as Borr expects, but for Borr, that may be less relevant due to their low-cost profile.

Borr has taken control, but other owners may wake up

So far, Borr’s empire-building has been met with very little competition.   As more owners see that the market is improving and become more willing to invest using Borr as their proof of concept, we think that Borr will be challenged – at least more than they are today.

But the way things are going now, Borr is unlikely to let that stop them.