They built them and no one ever came. Now shipyards need to do something other than wait if they want to solve their newbuild rig problem.

It’s 2019, the offshore rig scene is ramping up after a long and difficult downturn and newbuilds are finally leaving shipyards. Cue 2020, Coronavirus and a new oil price mess. There are still 69 newbuilds in yards and 65 of them, estimated by Bassoe Rig Values to be now worth approximately $6.2 billion, have nowhere to go. During the offshore rig newbuilding boom, which commenced around 10 years ago now, far more rigs were ordered, many on speculation, than were proven to be needed. Fast forward to 2020 and there is still a glut of units awaiting delivery from yards with little-to-no sale or work prospects in sight.

Data from Bassoe Analytics shows that there are 43 jackups, 18 drillships and 8 semisubs still classed as “under construction” today, though many of these have had deliveries deferred year after year in hopes that they will have brighter prospects to get a contract in a few years when the market recovers. Unfortunately, this has been the plan for the best part of a decade for some rig owners and now that we have escaped one downturn just to be met by a second means that little will change near term. Oil price, near-term demand and dayrates are all struggling and until these improve, newbuild sale and contracting activity will remain muted.

Do any of these rigs have work to go to?

Between the beginning of 2019 and mid-October 2020, 40 units were delivered thanks to some improvement in global oil market fundamentals. The majority of these were jackups, which were put to work in the Middle East, Mexico or China; meanwhile five harsh-environment semisubs were successfully contracted on long-term commitments in Norway plus a further semisub was contracted for work in Chinese waters. Only two drillships were delivered during the period, both Sonadrill units, with just one securing work in Angolan waters.

As can be seen in Figure 1, only four of the 69 offshore rigs currently in shipyards have known future contracts in place: two are Transocean managed 20k BOP drillships, which will be utilized under long-term deals in the US Gulf of Mexico, and the other two are newbuild jackups ordered by ARO Drilling specifically for long-term deals with Saudi Aramco.

Who is responsible for all this excess tonnage?

Most of the companies originally responsible for these newbuilds have defaulted on their orders and walked away. That does not necessarily mean that it was their fault. When everyone wanted to order a new rig, circa 2010, shipyards enabled buyers by offering low-risk terms. The original buyers were hurt the least out of all this and the shipyards have been left holding assets that nobody wants.

As has been the norm in the past, newbuild jackup ownership remains fragmented especially in comparison to floating rigs (see Figure 2). There are still 18 different “owners” within the newbuild jackup segment, with Chinese companies still essentially in control of the market. Like jackup ownership, the spread of newbuilds within shipyards is also disjointed with these 43 jackups spread across 14 different yards. 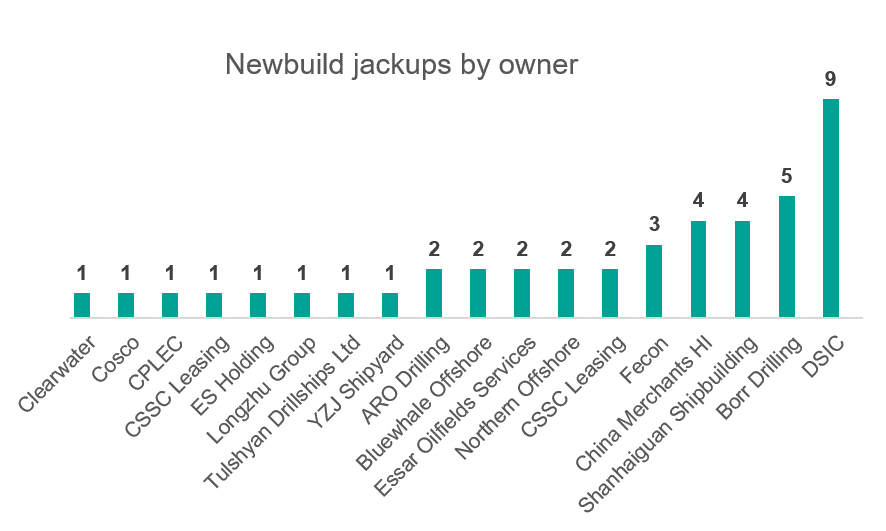 On the deepwater side of the market, drillships are the main cause for concern with more than double the amount marooned in comparison to semisubs (see Figure 3). The main reason behind this split is that many of the semisub newbuilds were designed for the Norwegian Continental Shelf, a market that has been doing relatively well, therefore yards managed to find new owners for these prior to 2020. It is now mainly benign floaters that are left in the yards. Most of these drillships were originally ordered by drilling contractors such as Seadrill, Ocean Rig, Pacific Drilling which, when faced with a depressed market and lack of demand during the last oil downturn, cancelled construction contracts with yards. 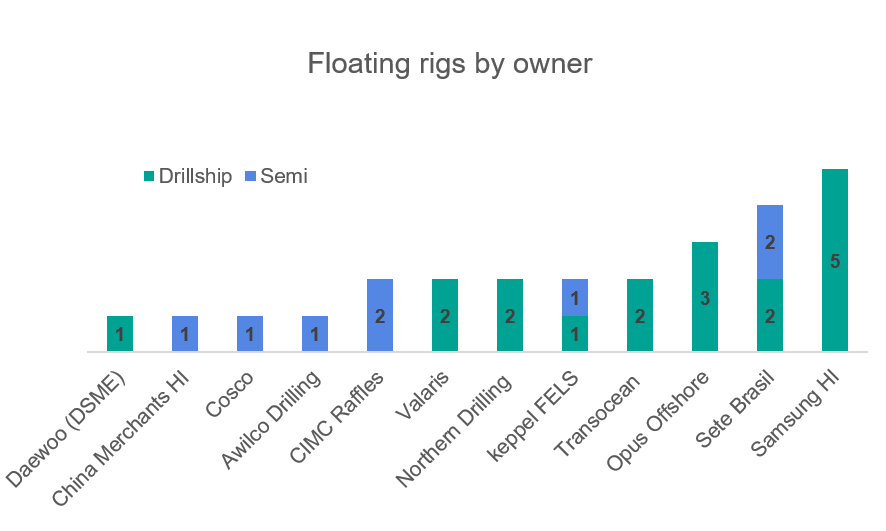 Many shipyards are now under huge financial strain after owners backed out of contracts, leaving them to finance and finish construction work following a nosedive in drilling demand. Yards have been forced into the awkward position of having to build, own, and pay to maintain these assets.

What are the options going forward?

There are some companies which have been formed based on rescuing and managing these abandoned rigs, with SinoOcean being one of the most successful of late in the jackup segment. Perhaps more of the excess jackup tonnage will be brought under the wing of such companies, some will may be picked up by COSL for work in Chinese waters, while others could still be secured on bareboat leasing agreements which had been a growing trend until COVID and the oil price crash.  Shelf Drilling, for example, recently cancelled bareboat agreements with CMHI for two jackups.

One potential solution for shipyards would be to consider upgrading some of these rigs to cater to a growing trend towards “greener” drilling capabilities. This could make them more attractive to potential buyers and help to recover some of their loses. However, this would mean requiring more funding and not many yards would be open to risking further loses. However, yards that at least start investigating this could end up better off than the alternative.

The other options going forward are quite simple. Yards can keep holding onto these rigs, digging a deeper financial pit whilst hoping for a miracle upturn in the market; they can bite the bullet and try to sell assets while taking a massive financial loss; or a final option (and one that is becoming increasingly likely) is that some of these newbuilds could be scrapped before ever being put to work. Shipyards cannot keep stranded assets forever and now that many of these units are likely to have been written down, and with no market improvement in sight, it is probable that they will shortly attempt to offload rigs. Keppel Corp recently announced that it is considering divesting “non-core” assets such as drilling rigs as part of a new asset-light strategy. We believe that this is just start of many more such announcements to come.

Bassoe Analytics estimates that the original order value of these 65 remaining rigs would have been in the arena of $21.4 billion and when compared to our current estimated value of just $6.2 billion this already shows a brutal loss of over $15.2 billion for shipyards. To make matters worse, if yards start offloading newbuilds just to get rid of them, rig values may fall further. As reported in our last article, Ending offshore rig owners’ bankruptcy nightmare requires a lot more scrapping, these dormant rigs are all part of a bigger global oversupply problem in the offshore rig market. Until we witness a mass scrapping of old tonnage to make room for the new, these dormant rigs will likely continue to sit idly awaiting maiden charters that may never come.