After another licensing round that beat expectations, offshore drilling activity in Mexico heads toward expansion again. Rig owners can look to more drilling following years of cost cutting and waning Pemex demand.

This week’s auction in Mexico netted ten new shallow-water blocks, but the important thing to note is the entry of more foreign oil companies in the country.  Combined with the success of the deepwater round of 2016 after Mexico's decision to reform regulations for international and private investment, the shallow water round proves that international oil companies see Mexico as part of the future.

Speaking after the close of this week's auction, Energy Minister Pedro Joachin Coldwell said that new investment of up to $8.2 billion may flow into the country.

A range of new IOCs, such as Shell, Total, Eni, Lukoil, and Respol, could potentially develop a combined area producing 170,000 barrels per day in the shallow water fields while deepwater field volume could be many times higher than that.

Who’s in and where?

As Pemex seeks to limit investment (while optimizing its current production), foreign new-entrant oil companies will be key in driving growth (in deepwater and shallow water) in the years to come.

There are currently only five floaters in Mexico.  All of them are built in 2010 or later; three are high spec (GVA 7500 and Moss Maritime CS-50 designs).  While four of the five are under contract, most of them could be available by the time the demand effect of last year’s deepwater round kicks in.

Despite this, we see opportunities for more floaters to come into the country as activity picks up.  And a new deepwater round at the end of this year should provide further impetus for expansion into the Mexican floater market. 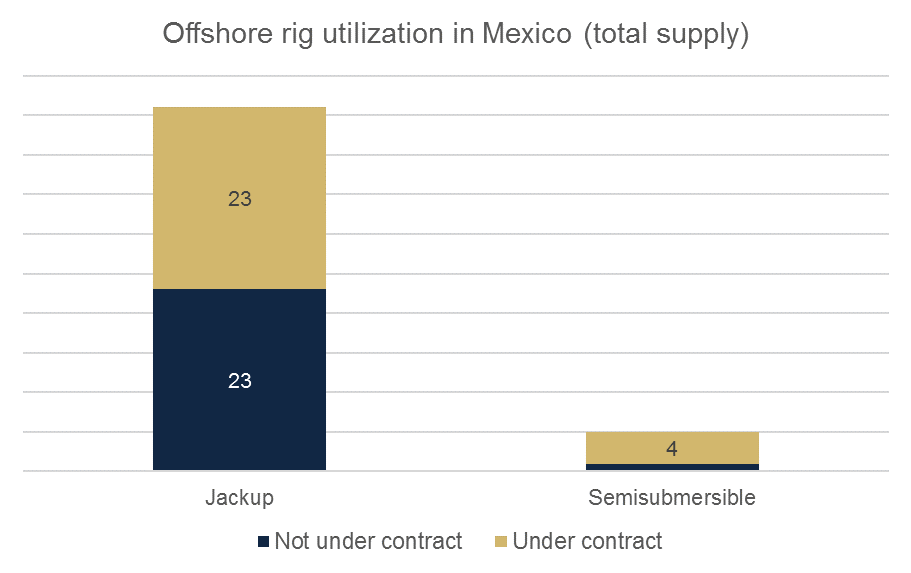 Less opportunity for jackups outside of Mexico, but better days for those already there

In 2014, there were 52 jackups working in Mexico – virtually all for Pemex.  Now, there are 23 rigs on contract, but three of these are on standby and at least half are on reduced dayrates due to cost cutting by Pemex. 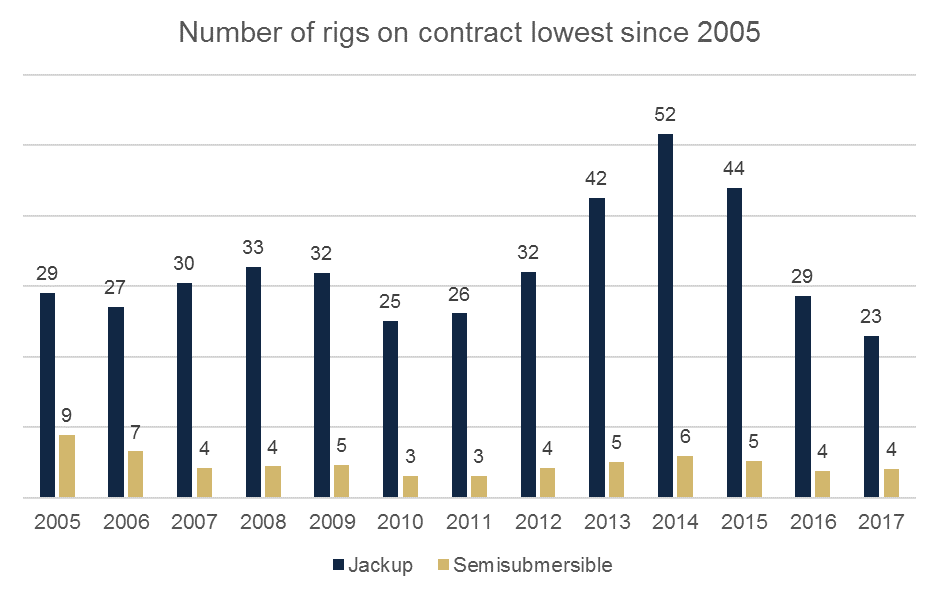 The few recent drilling contract awards in Mexico have been short, and dayrates have moved into the sub $70,000 range.

So far, we’ve seen international contractors being more competitive than their Mexican peers in the low rate environment.  That could change, however, as most Mexican contractors have started to focus more on achieving required operating cost efficiency.

Pemex currently is expected to add only a limited number (if any) rigs over the next several years.  The high of 52 working rigs may never be reached again, but potential remains for a significant rig demand increase driven by the entry of IOCs after the latest licensing rounds.

Looking at the fleet of 46 jackups, only 30 are available by 2020 – and another two are owned by Pemex directly and unlikely to be competitive for international operators.  Of these, 21 are “newer” – 11 are built pre-1986 and may never return to service as new operators will prefer modern rigs.

We expect a majority of the 21 newer, available jackups to find work over the next two years as drilling tenders in the new shallow water regions should be released starting in early 2018. While there may be less opportunity for rigs outside the region, owners of higher quality rigs in Mexico are well placed for increased demand.

The situation may be better for owners of rigs able to drill in 400ft of water.  There are only six 400ft IC rigs in Mexico which are available by 2020. We don’t know exact water depth requirements for future drilling projects yet, but there are a few fields, such as Area 12, which could require 400ft rigs.  As such, this segment could present opportunities for jackups located elsewhere (and possibly floaters for the deeper waters of the shallow water fields). 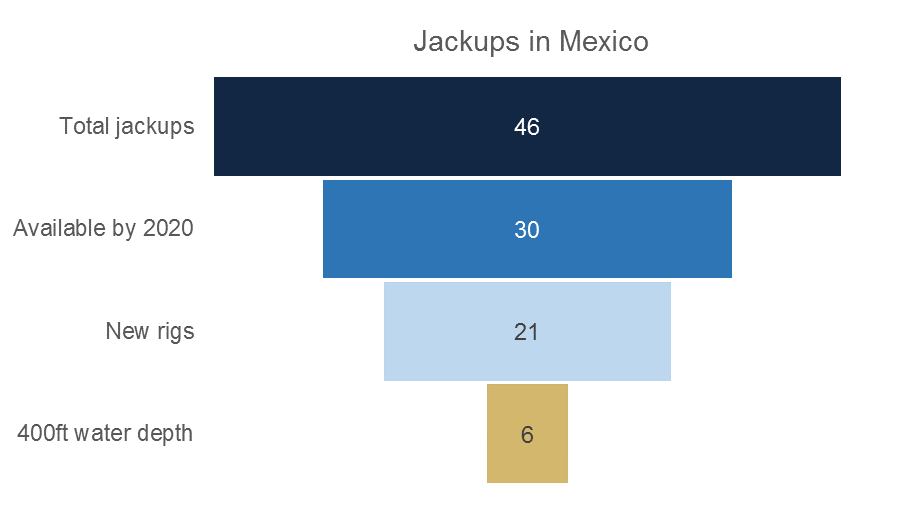 Mexico’s abrupt diminished contribution to worldwide rig demand has exacerbated rig oversupply.  Strong interest, however, from international oil companies in the recent block auctions signals that Mexico may once again be a major factor in the offshore rig recovery scenario.