The joint venture between Saudi Aramco and Rowan is very significant, and will undoubtedly have implications in all of the Middle East.

The Middle East is one of the most important offshore drilling rig markets in the world.  For jackups, it’s the center of the universe: out of a total of around 530 jackup rigs, 174 are in this region.  Shallow waters, cheap development costs, and a lot of oil make the Middle East key for any owner of benign environment jackup rigs.

Saudi Arabia plays an integral role in this vast offshore oil and gas empire.  With 43 jackups currently on contract, Saudi Aramco is the largest jackup operator in the Middle East – and in the world. 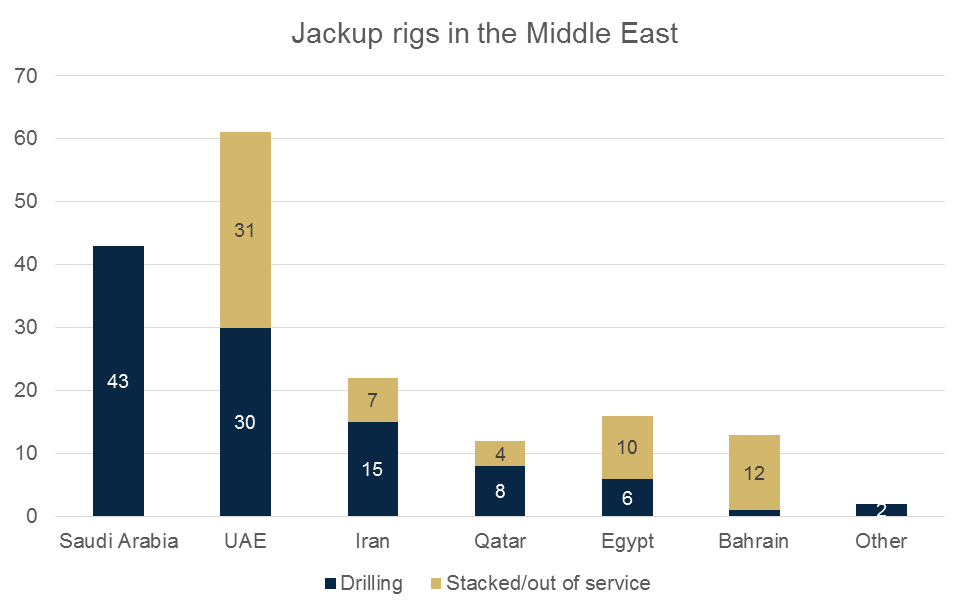 So what happens when Saudi Aramco announces that they have entered into an exclusive joint venture agreement with Rowan for the ownership, management, and construction of rigs for Saudi Arabia?

The answer may seem simple: for Rowan it’s great; for the rest of the rig owners, it’s not.  But it’s the uncertainty the deal creates which is the real issue at the moment.

Why did SA do it?

In December, Saudi Aramco announced that they had entered into “landmark” joint venture agreements with Nabors and Rowan “to create two new national champions focused on onshore and offshore drilling.”  CEO Amin H. Nasser stated that “these initiatives represent an unprecedented new large scale model of collaboration, with substantial value creation for both Saudi Aramco and its partners through a closer working relationship. These investments are part of a wider program to leverage our core activities, to help enable the sustainable development of the Kingdom’s economy through diversification, and the development of an internationally competitive and dynamic local energy sector, supported by national champions.”

The joint venture with Rowan will initially own seven rigs (two from Aramco and five from Rowan).  Four additional Rowan rigs will be managed by the joint venture, bringing the total to 11 rigs.  There is also a plan to build 20 jackups in the Kingdom over the next ten years.  Saudi Aramco (and Saudi Arabia) will, through the joint venture, have a center of competence within the offshore drilling sector which should provide a boost to the local economy and realize efficiencies in their supply chain.

Why did Rowan do it?

Why wouldn’t they?  Although Rowan might not have cornered the entire Middle Eastern jackup market, they secured a long term commitment for a meaningful number of rigs with a major national oil company.  The deal strengthens Rowan’s position in the region and should be considered a significant opportunity and platform for growth.

What’s the outlook for everyone else?

The joint venture isn’t immediately closing off all of Saudi Arabia to everyone except for Rowan; instead, it’s appropriating a designated number of Rowan rigs to work there long term.  The key here is the number: only 11 of the 43 rigs working for Saudi Aramco are part of the joint venture (as of today) – and these rigs would have likely stayed in the Saudi market anyway.  On the face of it, the joint venture may seem like a contained threat, but 43 out of the 105 jackups in the Middle East are working for Saudi Aramco.  That’s over 40% of the market, and if it becomes less accessible to other contractors, it will have far reaching effects.

The problem for the other drilling contractors is that there is risk that the joint venture will grow and more rigs will be pushed out of the Kingdom.  In addition, and assuming the Saudi rig market only grows modestly, the prospect of 20 newbuild rigs being phased in over 10 years could contribute to a steady outpouring of rigs from Saudi into other Middle Eastern countries which already have an oversupply of jackups.  In effect, the joint venture will make the largest jackup market in the world smaller for everyone else but Rowan.

While the deal will eventually be mostly negative for other drilling contractors, there are two factors that will determine just how negative it is: time to fully implement the joint venture and incremental demand increases in other Middle Eastern countries.  If demand in the Middle East does strengthen over the medium term, excess ex-Saudi rigs may be able to be absorbed and the effect of the joint venture could be less significant.  For now, however, the joint venture presents an impending damper on demand which could – to a yet unknown extent – evolve into a material one.