Deferring deliveries of newbuild rigs has become the trend over the past two years. Shipyards are now sitting with huge outstanding payments which are out of proportion to current asset values.

Not long ago, when S-curves were monitored 24/7, the biggest concern for owners of under construction drilling rigs was that the shipyard wouldn’t deliver on time.  Today, delivery dates are still a major issue, but for a different reason: owners don’t want delivery to happen.  With dismal utilization rates and low tendering activity by oil companies, it’s no surprise that owners want yards to hold their rigs as long as possible and allow them to take delivery in a better market.

Over $11 billion in outstanding or lost yard payments

Currently, out of the 33 newbuild semisubs and drillships, at least 25 are sitting complete (or nearly complete) at yards and have either been deferred or cancelled by owners.  There are over $9 billion in outstanding payments which yards have to carry on their books for extended periods of time arising from delivery deferrals.  Add to that over $2 billion in yard payments which have been lost from rig cancellations brings the financial risk to yards to over $11 billion.  These figures don't even take into account the larger number of deferred jackups and other specialized vessels which put further pressure on yards. 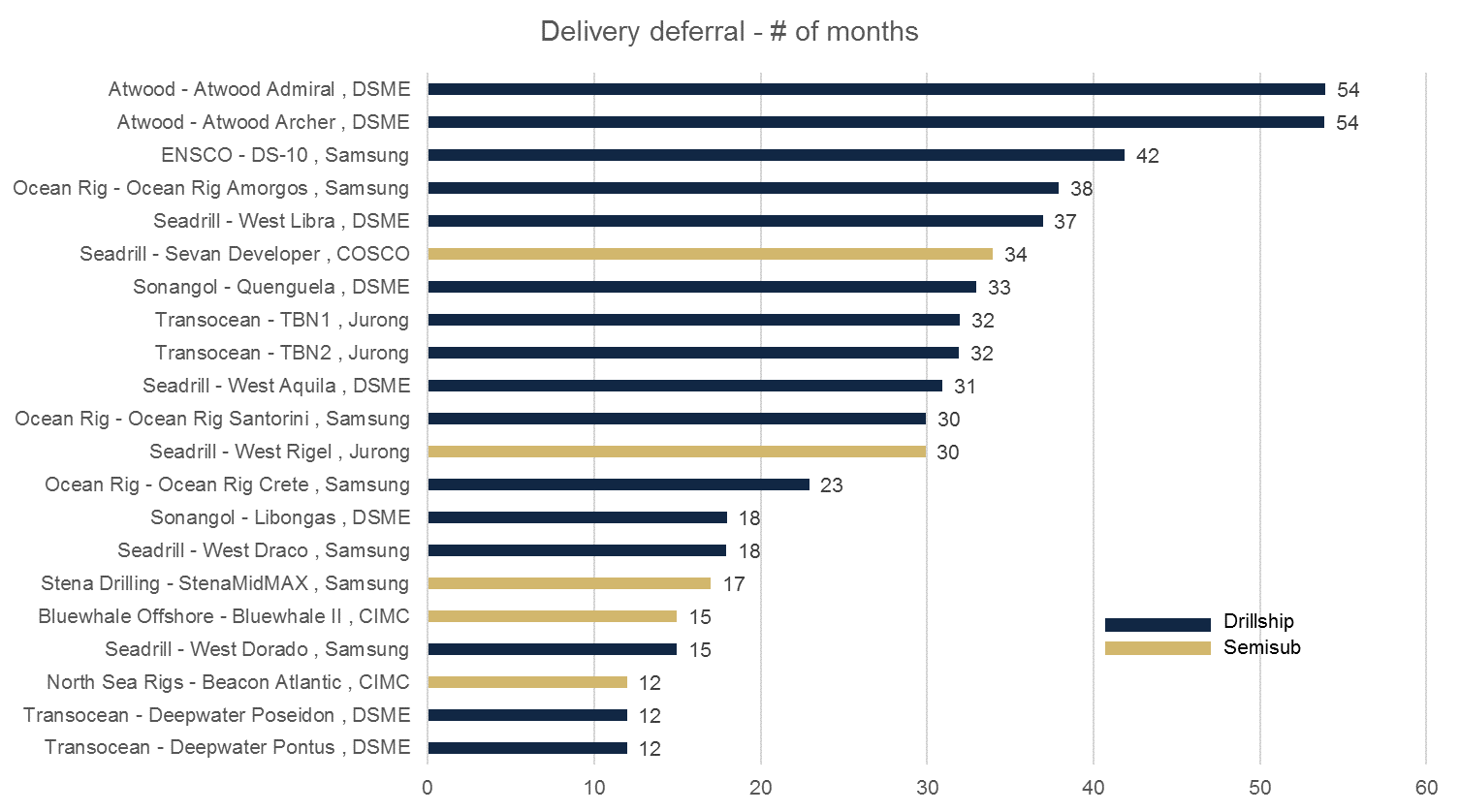 Over half of the deferred deliveries are now scheduled for 2018 or later. 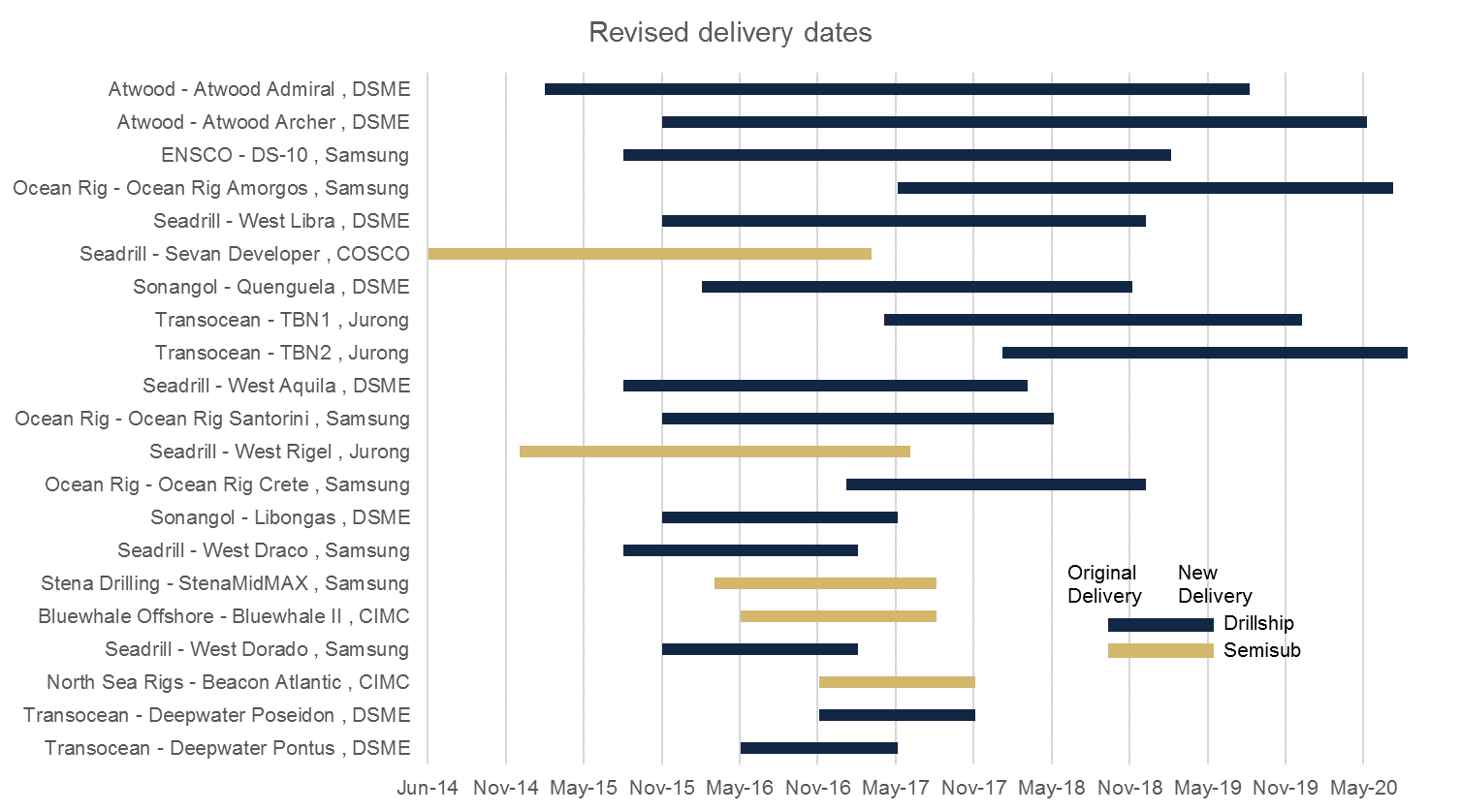 All of the floaters under construction were contracted with yards at prices ranging from the lower $500s to well over $600 million.  In today’s market, values for these rigs are estimated to be in the $200–400 million range – well below original newbuild cost.  As floater utilization is set to remain low due to the lack of demand for deepwater drilling and the influx of newbuilds, values are not expected to rebound materially in the near term.

Current floater utilization is in the 40% range.  Demand would have to more than double to a number of working rigs never seen before for utilization to be high enough to push values back to previous levels. 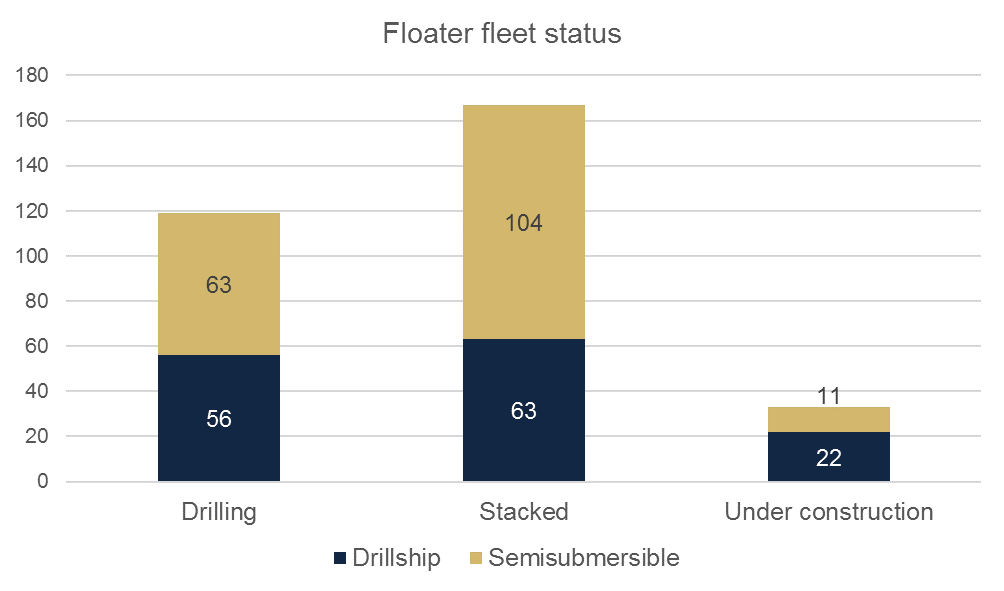 Adding to pressure on values is the fact that, while owners and yards are holding off on delivery, costs continue to run for stacking the rigs.  Whether these costs are added to the final delivery installment, paid up front, or subsidized by the yard to some degree, stacking is another element that increases the disparity between cost and value.  Furthermore, as we have stated in previous articles, when yards are responsible for stacking, the risk of higher activation costs increases – this is especially relevant for rigs which have been cancelled by owners and are under control by the yard.

Someone’s going to take a loss

The advantage for the newbiuld floaters compared to newbuild jackups is that the former are primarily owned by established drilling contractors who have the financial base to support taking delivery of these rigs at some point in the future.  This creates a situation where there will be very few distressed sales of newbuild floating rigs.   As such, yards holding cancelled rigs may see less risk of massive “realized” value destruction for newbuild floaters.  This is what’s keeping them in the game.

Although rig owners will likely have to apply meaningful asset writedowns to these rigs when they eventually take delivery, asset values may have risen enough by that time to limit extreme valuation changes on their balance sheets.

We do not, however, see the floater market recovering to the point where losses can be avoided.  If the deepwater and ultra deepwater markets do not improve significantly over the next two years, the risk of further cancellations or defaults could become more real.  If this happens, values may stay at levels which are well below 50% of build cost for the long term.