Brazil won’t save the deepwater market, but it’s going to help it. Petrobras will resolve their rig deficit, and IOCs will develop new acreage. That means more drilling.

The Brazilian offshore rig market will probably never see a return to its halcyon days of 2012. But these days, the market needs any increase in demand for deepwater rigs it can get, and Brazil is one of the best bets through the rest of this decade.

Two factors support a positive outlook for offshore drilling in Brazil.  The first is Petrobras’ need for more rigs as their current contracts start to expire.  The second, which may be even more significant, is the opening of up new acreage to international oil companies.

We’ve reached a point in Brazil where things are about to change direction from getting worse to getting better.  Petrobras has tried to clean itself up from its corruption scandals.  They have downsized and streamlined and have accepted (along with the Brazilian government) that the only way forward is to open up their resources to foreign operators.

There’s a lot of oil in Brazil, and even at today’s oil prices (which are higher than they were a few months ago), there’s a lot of wealth under their ocean floor.  And after a series of questionable state-sponsored decisions, the government won’t let the opportunity to reap that wealth slip away from them again.

As we noted earlier this year, the number of drilling rigs in Brazil has gone from over 80 to under 30 during the past five years.  Currently, 26 rigs are on contract (all for Petrobras), but only about 20 are on full dayrate and drilling due to Petrobras’ reduced effective demand.  By the end of 2018 – assuming no new contracts or contract extensions – Petrobras will have 14 rigs working for them.  By 2021, this number becomes three.

We estimate that Petrobras has a minimum requirement of around 20 rigs to sustain production through 2021. Assuming no incremental production increases, they need to award 17 new drilling contracts over the next two to three years.  And if the oil price holds above Petrobras’ break-even of around $50, demand could eventually surpass our estimated 20-rig minimum. 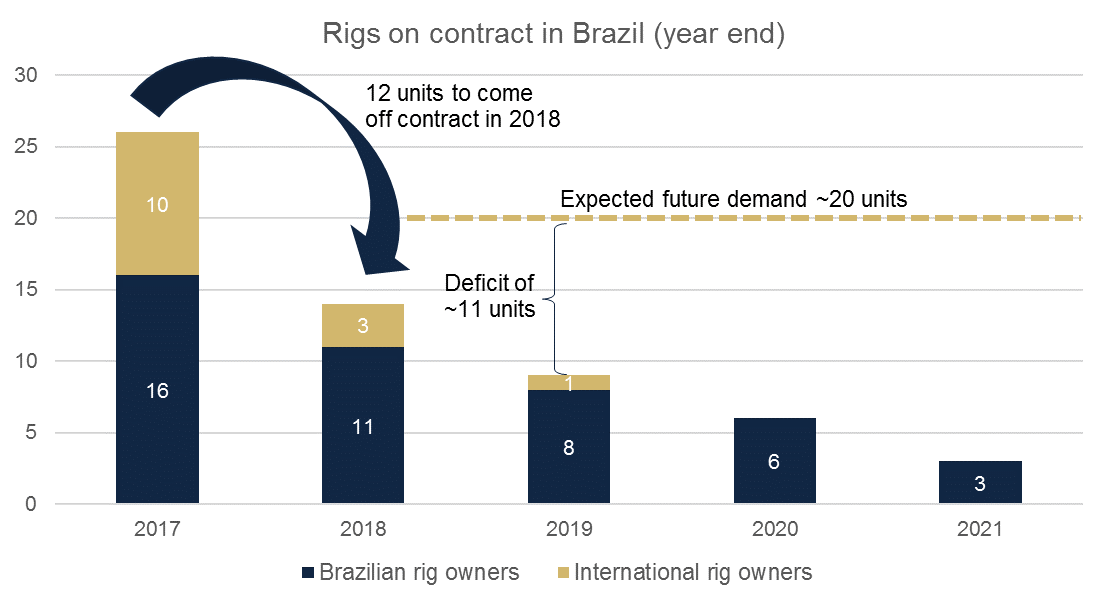 Even though we see a series of new drilling contract awards coming from Petrobras, dayrates are likely to remain in the $150,000–200,000 range until around 2020.

While Petrobras seeks lower rates (and has committed to reduce offshore capex), they will also seek more efficient rigs.  Just as most international oil companies these days look for newer rigs with modern equipment, Petrobras will do the same.  Out of the 26 rigs working in Brazil, 10 are either more than 15 years old or have DP2.  These rigs are less likely to secure contract extensions than newer, higher-spec rigs.

For rig owners currently operating rigs in Brazil, reduced dayrates will hit hard.  Today, legacy contracts still provide rigs with rates ranging from $300,000 to over $500,000 per day.  Petrobras knows they are paying too much for rigs, and although we don’t expect them to pursue further contract terminations (as they’ve not had a lot of success with this recently), they will use the market to their advantage and secure rigs at lower rates going forward.

But with the oversupply in the deepwater and ultra deepwater fleets, rig owners are unlikely to pass up an opportunity to generate cash when the alternative is stacking.   Owners of new rigs, who are able to operate efficiently at lower dayrates, will find work in Brazil.

Sete rigs will eat into some of the demand

We estimate that up to six Sete rigs could end up being delivered; delivery of four is virtually guaranteed.  Negotiations with Petrobras are still ongoing, but the Arpoador drillship and Urca semisub are complete enough to be able to start working within a few months and are very likely to secure work with Petrobras soon.

The future for the remaining four rigs still under construction is more uncertain.  These rigs, which are owned by the shipyards (KeppelFels and Jurong), could be sold off to other owners if no agreement is reached with Petrobras, but we see it as likely that at least two of them will also go to work in Brazil.

Assuming Petrobras awards contracts to four of the Sete rigs, there are still opportunities for at least 13 additional contracts (based on the total of 17 we estimate up to 2021).

Petrobras is the only real source of rig demand in Brazil.  But not for long.

Brazil’s first of nine oil and gas bidding rounds opened this week with 110 offshore blocks offered (out of a total of 287).  At the end of October, the 2nd and 3rd Pre-Salt bidding rounds will open.

Petrobras estimates that over 300 offshore wells could be developed and over $80 billion in new investments could flow into the country as a result of the 2017–2019 rounds.  All this, according to their estimates, could lead to “up to 20 drilling rigs working simultaneously.”

The entrance of international oil companies could change the market in a way that was unthinkable back in 2010. With the reform of local regulations, participation is set to be high as oil companies will compete for acreage that has higher potential for being developed compared to past rounds.

The involvement of IOCs in Brazil should increase toward the end of the decade, and this will drive further demand for rigs beyond what we’ll see from Petrobras alone.

Brazil has become more pragmatic and more commercial with respect to the future of their oil industry.  Future rig demand in the country may not be enough to revive the global deepwater rig market on its own, but it will regain at least some of the massive amount of power it once had.