The need for consolidation among offshore rig owners is just as dire as it’s ever been. Now that everyone loves offshore drilling again, many rig owners seem to think they’re strong enough on their own.

Consolidation.  A lot of hype, not much execution.  While the rig market struggled, everybody talked about it, but very few (and not nearly enough) did it.

Countless rig owners have mentioned consolidation as one of the primary barriers to increasing dayrates, mitigating oversupply, and offering oil companies more efficiency.

But over the past two years, only three rig owners have merged with (or sold out to) other owners: Songa (Transocean); Atwood (Ensco); and Paragon (Borr Drilling).  At the same time, two new owners have popped up: Borr Drilling and Northern Drilling.  Not much consolidation there.

Today, Bassoe Analytics shows that out of a fleet of around 770 competitive drilling rigs, there are over 100 rig owners (at least 74 of these have active rigs).

The top 14 largest rig owners by number of assets only control around half the fleet.   More than 80 rig owners control the other half.

In an industry that requires so much capital investment and has potential for economies of scale, you’d think that rig owners would put more focus on resolving the fragmentation that restricts them. 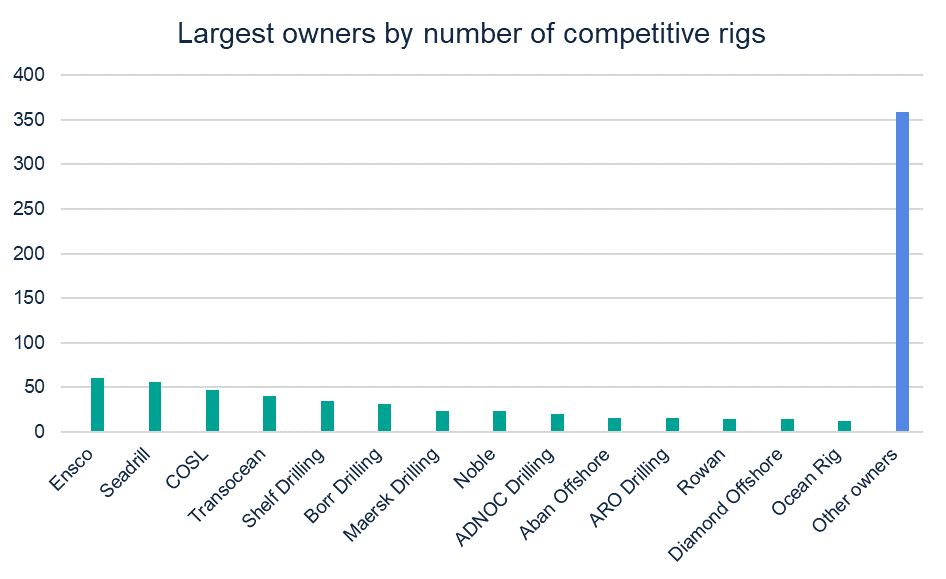 We’ve described our thoughts on drilling contractor consolidation before and pointed out some of the reasons why it hadn’t happened yet.  Issues like regionalization, lack of capital (for buyers), unwillingness to sell at acceptable values (for sellers), and variations in assets which don’t match well with other owners’ rig fleets have kept the number of owners high.

But that doesn’t mean there wasn’t (and still isn’t) a need to consolidate.

When the outlook for offshore drilling was bleak and rig values were lower, the thought of consolidation sounded great.  The problem was that not many owners wanted to (or could) participate in the effort themselves.

In some cases, the few larger, financially-stronger owners who may have wanted to acquire assets watched over distressed owners like vultures.

“But we’ll just wait for the right moment,” they said.

In their case, the right moment meant waiting until the current (as opposed to forecasted) market justified it.  This erodes most of the upside in asset values, and as they watched, their prey started coming back to life again.

In other cases, rig owners thought they had enough challenges with their own rigs.

“Why expand when we still need to secure backlog for the fleet we already have?” some asked.  “Let someone else take the risk on asset plays.”

“Look at those smaller or speculative rig owners,” they exclaimed as Borr Drilling and Northern Drilling bought rig after rig on the cheap.  “They’ll never be real competitors until the market gets way better anyway.  We’ll deal with them later.”

So will it happen or not?

On the back of rising rig tendering activity and high oil prices, the risk is that rig owners (both consolidators and consolidation targets) just ignore the consolidation issue and stay on their own.

“The market’s about to get awesome again,” they say now, settling back into their chairs.  “We’ll be fine.”

But if the rig market continues on the path of a new upcycle (which we expect it to do), the consolidation that should have been part of the fleet clean-up process will end up having a dampening effect on how good things are going to get.

Competition, especially amid fleet oversupply and the fear of escalating costs that oil companies will never forget, will remain high even as demand grows and more rigs are needed.  For rig owners to make up for the years of lost cash flow, they’ll need more pricing power than they have now.  And consolidation could give them that.

Although many rig owners might think that happy days are here to stay and that they’re strong enough on their own, their decision to consolidate will come down to price and the realization of their (in)ability to compete in a market that requires more efficiency than ever.

They might sit back and wait some more, but it’s likely that at least some rig owners with the ability and desire to consolidate will eventually become more aggressive in their efforts.

So the answer is yes, consolidation will happen because it has to happen.  It’s just gonna cost more.

Get ready for some deals

We expect a much-needed, if delayed, surge in consolidation activity in the offshore rig market.

We'll see a few large consolidation deals as we move toward the end of the decade.  As some of the largest rig owners seek ways to expand with fewer large owners to compete with, at least one major M&A deal should happen this year.

Other smaller deals will likely involve owners who don’t have proper management systems or can’t maintain competitiveness due to higher per-rig costs.

It also wouldn’t be surprising if one or two of the owners who’ve recently restructured and are owned by creditors were snapped up at some point.