South America will lead the way in fixing a troubled deepwater drilling market as Petrobras initiates major production projects and demand ramps up in Guyana, Peru, and Argentina.

You won’t find too many people excited about the deepwater drilling market these days.  It’s been bad-mouthed for the last two years as analyst after analyst (including me) have highlighted the grim reality of oversupply, low dayrates, and a lack of commitment by oil companies toward long-cycle capital investment projects.

But that doesn’t mean we haven’t been optimistic on certain deepwater topics.  The prospect for higher demand for drillships and semisubs in Brazil has always been seen as one of the major catalysts for a more normalized level of deepwater drilling activity.

Reality can change quickly in the offshore rig market.  And right now, as new facts start to surface, we think there’s even more excitement in store in deepwater drilling as we move through 2019.

Petrobras will need more drilling rigs than they need today

Petrobras’ baseline rig requirement to maintain current production is estimated to be around 20 rigs.  Today there are 26 rigs on contract, but only around 20 are drilling at one time.

This year, the number of rigs on contract will drop to 14. Petrobras will need to tender for at least four rigs to maintain 20 rigs on contract as not all of 12 rigs coming off contract this year have options.  Bidding activity, therefore, will already start picking up this year, and that’s only for baseline demand.

Petrobras’ recent pre-salt Phase 3 plan, reported by Upstream, will now include 12 new FPSOs compared to only six FPSOs in their recent five-year business plan.  Assuming that a doubling of the number of FPSOs will lead to a doubling in Petrobras’ offshore drilling requirements related to the pre-salt plays, this development becomes a major data point.

With respect to the 12 FPSOs, Petrobras says that they plan on drilling 88 oil production wells, 73 water-alternating-gas injection wells, 16 water injection wells, and one gas injection well for a total of 178 wells.  Let’s estimate that each well takes 100 days and that the drilling of these wells will take eight years (so that all FPSOs will be online by 2027).  This equates to 17,800 drilling days, or 2,225 days of drilling per year.  And that means that over six offshore rigs will required full time over the next eight years – just for Petrobras’ pre-salt Phase 3 projects.

The oil company stated late last year that they estimate that over 300 offshore wells could be developed as a result of their recent and ongoing pre-salt bidding rounds which will lead exploration and production on new acreage by Petrobras and other major IOCs.  They estimate that this could lead to up to 20 rigs drilling simultaneously.  Let's say that Petrobras accounts for up to 12 of these rigs.

And it doesn't stop there.  With new demand expected from IOCs like Shell and other majors, the total number of floaters on contract in Brazil could hit around 40 rigs by 2021.

Considering that two rigs currently on contract are over 40 years old (Atlantic Star and Transocean 706) could leave the fleet this decade – both are coming off contract this year – and that up to four other floaters currently working or stacked may not be competitive for future requirements due to condition or specification, then there are only 20 viable rigs in Brazil.

Now that most of the Sete rigs are cancelled, we assume that only four of these rigs (which are nearly complete) will be first in line for Petrobras contracts.  In other words, nearly 20 rigs from outside the market could be needed. 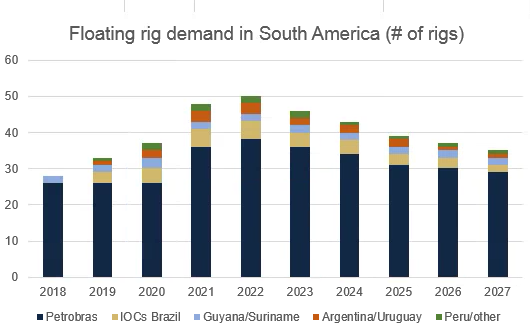 Demand from new South American countries is on its way

Over the past few years, not much has happened outside of Brazil.  Things look like they’re about to change now.

Argentina will kick-off the first of three deepwater bidding rounds this year.  Statoil is already the operator of Argentina’s Bajo del Toro Este license, and drilling of exploration wells could start over the next year or so.  And if the deepwater rounds are successful, we could see up to four floaters in the country by 2021.

Then we've got Guyana, where ExxonMobil's major discovery of around 3.2 billion barrels of oil equivalent in the Stabroek Block could bring up to 120,000 barrels per day of production by 2020. ExxonMobil currently has the Stena Carron on contract and will be taking Noble‘s Bob Douglas drillship on for a 3-year program in the area starting later this year.

In Peru, Tullow Oil and PeruPetro have five licenses which, when approved, could lead to drilling in 2019.

And in Suriname, Tullow, who drilled with the Noble Bob Douglas late last year on Araku prospect, has committed to further exploration in the country.

All in all, up to 50 offshore rigs could be working on deepwater programs in South America depending on how these new prospects turn out.

Looking at 2018 in isolation, the deepwater market probably won’t see a dramatic change, as we outlined in this year’s rig market outlook.  But we should look beyond the present and prepare for what's coming.

Rigs which are either working now or meticulously preserved and maintained will find themselves in a stronger market.  There will be massive variation in competitiveness among deepwater rigs, and rig owners who anticipate oil company requirements in regions like South America will win contracts as numerous opportunities start materializing.

What’s exciting in deepwater is that a higher rig demand scenario is plausible, and in one or two years, the viable supply of rigs could be much smaller than it appears today.