We're approaching a turning point in the market for new jackups. And we've got three reasons to prove it.

A few weeks ago, we described our view on “zombie rigs” – or the glut of old offshore rigs that don’t mean anything to the market anymore.  As I mentioned, rig utilization, although far from optimal, isn’t as bad as it looks on paper.

But it the story gets even better that that.

Before moving on, note that we’ve removed rigs working in the North Sea from the data for consistency purposes.

1) For every new contract for an old jackup, there are two for new jackups

The total number of jackup fixtures (new contracts signed) in 2016–17 is set to be the lowest so far this millennium.

The bright side is that the number of fixtures for old rigs has been falling sharply since 2011 while the number for new rigs has stayed relatively flat.  This year, new jackups have been contracted more than old jackups by a ratio of 2:1.

Now, as signs of an uptick appear, we expect this ratio to increase as rig demand rises and the number of competitive rigs falls. 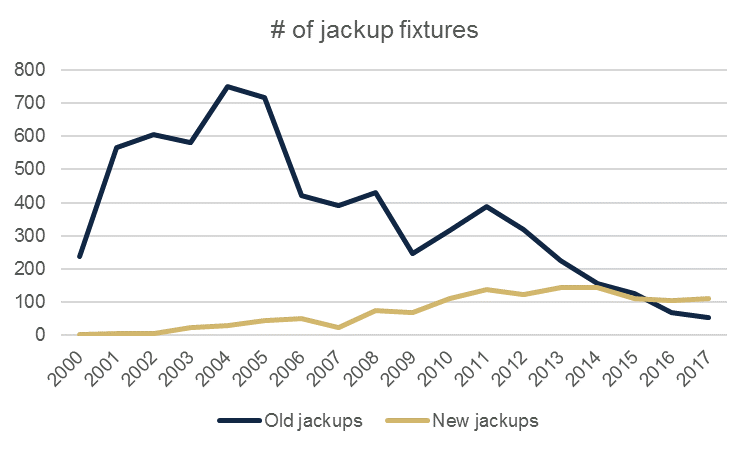 Most rig owners are prudent enough to not lock themselves into lower rates for extended periods of time.  That’s one reason we’re seeing shorter contracts being awarded these days.  (We’ll leave ONGC’s recent eight-rig, three-year tender out of this discussion as it’s an outlier.)

When contract durations start rising, so will dayrates.  And during the past year, durations for new-rig contracts seem to have flattened out. 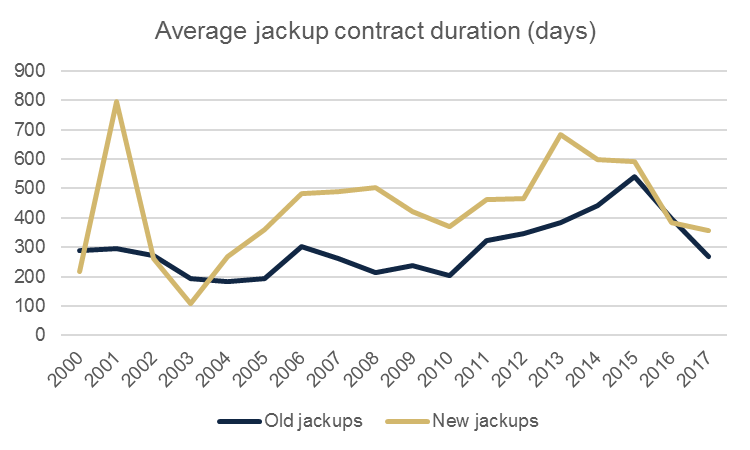 When you look at the chart below, keep in mind that it depicts the last three years as better than they really were.  There have been a lot of undisclosed dayrates recently.  Nondisclosure happens for a variety of reasons, and one of them is that rig owners don’t want you to know the low rates they’ve signed up their rigs for.

Out of 161 jackup fixtures this year, only around 35 have publicly-disclosed rates, and they're at the high end of the range.  What this means is that real average dayrates for 2015–2017 are much lower than they appear to be in the chart.

We estimate that current rates for new rigs are only marginally higher than comparable old rigs.   Apart from the extraordinarily low rates in India and higher rates in the North Sea and the Middle East (i.e., Saudi Aramco), rates in the main jackup markets are still stuck in a range between $50–70,000 per day.

But let’s forget about the recent dayrate numbers for a moment and look at the historical old rig vs. new rig dayrate spread instead.  Before 2015, a much higher percentage of rates were reported, and there’s a clear historical dayrate spread between new and old rigs.  We expect this spread to re-emerge.

To add further support to this hypothesis, operator efficiency requirements and preferences for new rigs should make new rigs even more sought after than old rigs.  That, combined with the expected reversion to the mean for dayrate spreads, points to the potential for significantly higher rates for new jackups over the next year or two.

In other words, what you see on the right side of the graph may not accurately represent reality today, but it’s likely to look like this in the future.

The new jackup fleet is experiencing a secondary bifurcation

In addition to Borr Drilling's recent newbuild rig acquisitions, we’ve seen investor interest in the newest segment of the new jackup fleet strengthen over the past month.  This is leading to a sort of bifurcation within a bifurcation (I guess you can call it a trifurcation) as very new (either undelivered or delivered this year) jackups have started to gain larger relative premiums over rigs five to ten years older.

As investors and owners expect an extended low-dayrate period, they're focusing more on age at the expected time of market recovery rather than on current age.

Our Rig Valuation Tool (RVT) reflects the effect of this psychology on values.  RVT values for recently delivered or newbuild premium and harsh environment jackups have now increased by another 5%-8%.

This effect may start to fade as the market improves, but we expect relative value spreads (i.e., premiums for the newest part of the premium fleet) to maintain their breadth in the meantime.

If you’ve got new jackups on your books at realistic values, you’re good to go

Perhaps you’ve got $160 million or more outstanding debt on a jackup rig.  Perhaps you quasi-own one which you ordered during the boom and is now stranded at a shipyard with outstanding payments that eclipse the rig's value.  In these cases, you’ve got a bit of a problem.

But the beginnings of decent returns may not be that far off for deleveraged owners or those who have acquired rigs at discounts.  As we’ve mentioned before, if you believe that dayrates will rise, then you should be acquiring new jackup rigs at today’s values (which are higher than they were but still attractive).

We’re still a long way off from dayrates being high enough to support a $200 million capital investment in a premium jackup.  And even if you do acquire one at a discount, you’re not going to generate a meaningful amount cash from operations while dayrates are still near break-even levels.