This week Valaris, Odfjell, Noble, Shelf and Seadrill all had new contracts or extensions confirmed. Meanwhile, Woodside reports that it will start demobilizing from Myanmar following recent the recent military coup.

We have released our latest market commentary looking at offshore rig sales and values over the last year. With more pressure to sell rigs than ever before, some drilling rig owners are prioritizing their future over current asset values: Asset valuations become even more confusing as rig owners sacrifice rigs to stay afloat.

In its recent fleet update, Seadrill confirms that ultra-deepwater drillship West Saturn will remain operating offshore Brazil until November 2021, after current operator ExxonMobil declared a contract option. The rig, which had been due to finish up with the operator in June, is undertaking exploration drilling at the Opal and Titan prospects, with the third well location to be confirmed.

Meanwhile, Seadrill has finally confirmed that during November its jackup West Tucana was leased into the Gulfdrill joint venture, bringing the total number of Seadrill owned rigs leased to the joint venture to three. The rig is now on hire offshore Qatar for a period of three years.

In its latest fleet update, Shelf Drilling announced a new contract as well as some extensions. Jackup Shelf Drilling Resourceful will return to work this year after being awarded a one-year contract in West Africa with an undisclosed operator, due to begin around March. Jackup Shelf Drilling Tenacious will now remain offshore Oman with Masirah Oil after the operator declared several contract options, jackup Parameswara will continue working for Adani India until May 2021 after an option was exercised, and jackup Trident 16 returned to operations for Petrobel Egypt in November 2020 and the contract was subsequently extended until April 2021. Additionally, ONGC will continue drilling with jackups Trident XII and Harvey H Ward until May 2021, after both contracts were extended from a February end date. Meanwhile, jackup Key Singapore received an early-termination notice from Eni effective January 2021 and the outstanding contract backlog has been transferred to the Key Manhattan contract, which will keep the unit occupied until February 2022 for work off Italy and Croatia.

Santos has firmed up another contract for use of jackup Noble Tom Prosser, this time for exploration work off Australia beginning in late 2021. The rig will undertake drilling of two explorations wells, Pavo-1 and Apus-1, near the Dorado field. With the drilling rig contracted, the operator will now proceed to secure the remaining equipment, services and approvals required to commence drilling operations. The rig is scheduled to undertake a three-well infill drill for Santos at the Bayu-Undan field off Timor Leste in Q2 this year prior to the newly announced contract off Australia.

Further to a stock exchange notice on 25 January 2021 in which Odjfell Drilling announced the award of letters of intent with Lundin Energy Norway for the use of harsh-environment semisub Deepsea Stavanger. A final contract for the drilling campaign has now been signed. The duration of the contract is changed to three firm wells plus six optional wells. The firm scope has a contractual value of approx USD 33 million.

Ultra-deepwater drillship Stena Carron has completed drilling of an exploration well targeting the Bulletwood-1 prospect on the Canje Block, Offshore Guyana. The well encountered quality reservoirs although non-commercially viable. The wildcat is the first of three wells scheduled to be drilled on the block in 2021 with drilling of prospects Jabillo-1 and Sapote-1 to follow.
The Norwegian Petroleum Safety Authority has given DNO consent for the use of harsh-environment semisub Borgland Dolphin for the P&A work on the Oselvar field located in PL 274, offshore Norway. The field was shut down in May 2018 and decommissioning is expected to be completed by the end of 2022.

Woodside has confirmed plans to start demobilizing drilling crew from Transocean drillship Dhirubhai Deepwater KG2, which it is using for exploration drilling off Myanmar, in response to suspected human rights abuses committed by the military following the coup. Woodside has started reducing its presence and expects “full de-mobilisation” of its drilling team within weeks. It had previously said it has about 100 workers in Myanmar. The drilling works are exploratory and Woodside said it did not generate revenue in the country nor have any direct commercial arrangements with Tatmadaw-connected organisations.

DNO is seeking approval from the Norwegian authorities to drill its 2/5–15 Gomez exploration well and a potential sidetrack in the North Sea using harsh-environment semisub Borgland Dolphin. The drill, which will be carried out in PL006C, is expected to begin on June 10, 2021 at the earliest and last a maximum of 70 days.

Jackup Noble Sam Turner has now moved from Invergordon, UK, to the Danish Dan field where it will begin a new two-year drilling campaign for Total. The rig completed its last contract in Q3 2020, which was also with Total offshore the UK.

Harsh-environment semisub Deepsea Yantai has commenced drilling operations for Neptune Energy on the Dugong appraisal well in PL 882, located in the Norwegian sector of the North Sea. The Dugong discovery was one of the largest discoveries on the Norwegian Continental Shelf in 2020 and the Company estimates recoverable resources to be between 40–120 million boe.

Ultra-deepwater drillship Maersk Venturer has departed Las Palmas, Canary Islands, and is en route to Takoradi, Ghana, in preparation for a new four-year contract with Tullow Oil. Drilling is scheduled to begin in April 2021.

Hurricane Energy has updated on its plans for drilling at the Lancaster field offshore the UK. On 18 December 2020, Hurricane outlined contemplated next steps in the Lancaster development programme, which included a second production well in 2021 by side-tracking from the existing 205/21a-7z well into the central area of the field.This proposed side-track is more complex in nature than previous wells on Lancaster due to the incorporation of an intelligent completion and the challenges of delivering the well trajectory from the side-track location. As a result, the Company has concluded that it will not be possible to drill this well during the 2021 summer weather window without unacceptable operational and cost risk. While no firm decisions have been made, the Company is now considering various options including: drilling the side-track in 2022 following further planning activity during 2021; drilling the side-track together with the previously contemplated water injection well as a combined programme in 2022; or drilling the side-track in 2022 and the water injection well in 2023.

Africa Energy says that the Gazania-1 exploration well that will be drilled in Block 2B offshore South Africa, has a target spud date of late 2021 to early 2022. It is understood that a rig search has already begun for the campaign.The Gazania-1 will test a prospect in the A-J rift basin that is near but updip of the A-J1 oil discovery (1988) that flowed 36o API oil to surface. A success at Gazania-1 would de-risk a large inventory of prospects in the block that have been identified from 3D seismic data. Africa Oil has an indirect 5.5% economic interest in Block 2B through its 19.9% shareholding of Africa Energy.

Market sources indicate that Mellitah Oil and Gas has issued a market enquiry into rig availability for a drilling campaign offshore Libya which could cover up to 31 wells, starting in 2023.

It is understood that BP has now received tender bids for a floater to undertake development drilling offshore Senegal and Mauritania next year. Drillship Valaris DS-7 had previously been lined up to take on the job, beginning in September 2020, but the contract was later cancelled due to the challenges in 2020.

ExxonMobil has now received tender bids for its requirement for an MPD-capable drillship to drill off Angola commencing in mid-2022. The campaign will cover two years of firm work plus options.

Market reports indicate that Deep Value Driller is to purchase the 2014-built ultra-deepwater drillship Bolette Dolphin from a group of creditors for USD 65 million. The rig, which was originally ordered by Dolphin Drilling, is currently idle in Norway. Bassoe Rig Values had estimated the value of the rig to be in the range of USD 54 million to USD 63 million.

For the second half of 2020, Seadrill reported a loss of over $2.9 billion, compared with a loss of $1.75 billion in the first half of the year. The company reported revenues of $461 million for the second half of the year, down from $598 million in the first half of 2020. The company recorded and impairment of $2.86 billion during H2 as it viewed the possibility of further rig scrapping. Total backlog stands at $1.9 billion with approximately $50 million added during the quarter. 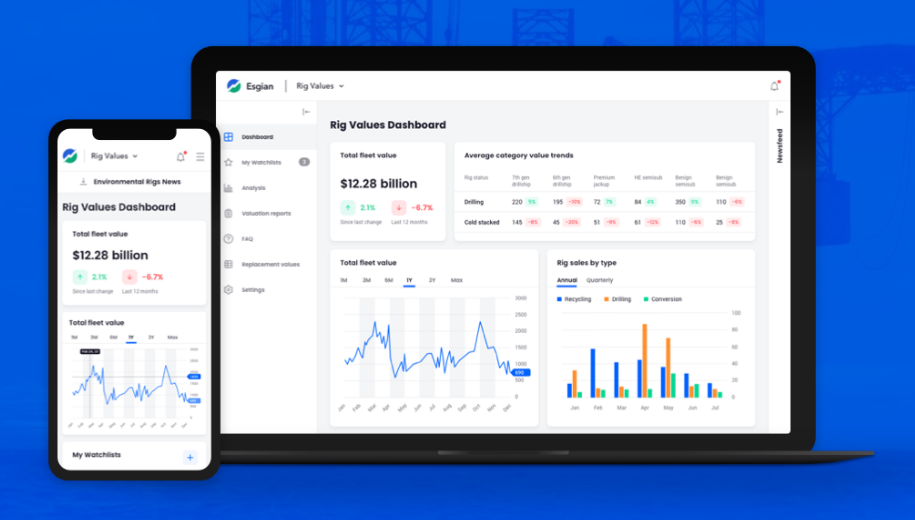