If you’re not ARO Drilling, you’re on the periphery of the Saudi jackup market. Rig owners can expect tough competition for fewer opportunities, but also an improving outlook for the rest of the Middle East.

Their company is real.  Their 20-rig newbuild program is real.  And their exclusive relationship with Saudi Aramco means that ARO Drilling now owns the jackup market in Saudi Arabia.

When we wrote about the Saudi Aramco-Rowan joint drilling company venture (now called ARO Drilling) a year ago, we said it wouldn’t immediately close off Saudi Arabia to all rig owners except for Rowan.  That still holds true, but over time, it’s going to become harder and harder for outsiders to remain in the most important offshore market in the Middle East. 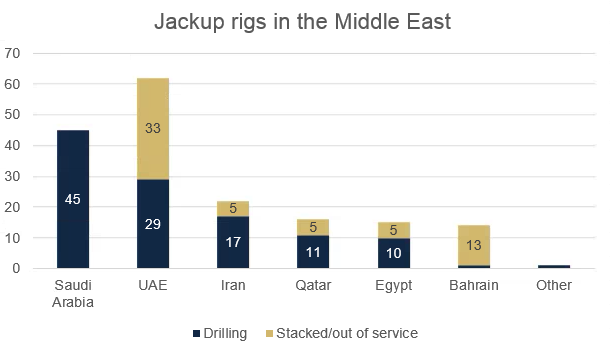 As ARO gets bigger, the Saudi Market gets smaller

Currently, 45 jackups are on contract in Saudi Arabia.  ARO now has 12 rigs operating under the ARO name (seven are or will soon be owned by the joint venture), while 33 rigs are managed by other contractors like Shelf, Seadrill, Ensco, ADES, Noble, and Saipem.

But starting in 2021, the first of ARO’s 20 newbuild rigs (to be constructed at the new shipyard complex in Saudi Arabia) will roll into the market.

Assuming Saudi Aramco demand holds at 45–50 jackups on contract at any time, the 33 rigs owned by other contractors today will reduce to around 13 toward the end of the next decade.  And during those years, rig contractors will have to fight to keep their place in the Saudi market. 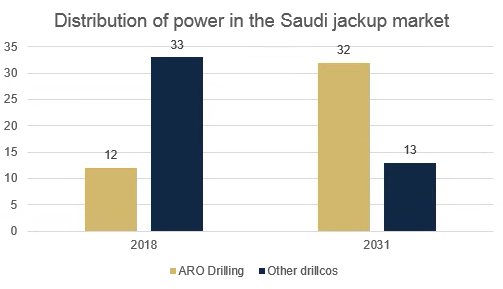 ARO’s plan to build 20 jackups over ten years has sort of been an issue the market chose to forget about.  It’s an enormous undertaking.  A new shipyard, a new rig design (which hasn’t been formally announced yet), a lot of moving parts, and a ten-year timeline makes the project something that the rest of market can sort of deal with later.

But these plans have matured.  The design is nearly set, the shipyard has partnered with Lamprell – the number one jackup builder in the Middle East – and construction of the facilities is underway.

Still, there are risks for delays and cost overruns, and the actual rate of these rigs’ flow into the market will determine how the demand situation plays out for other rig owners in Saudi Arabia.

As Rowan has reported, each of these rigs has a guaranteed 16-year contract where dayrates for the first eight years are governed by a formula which equals the cost of each newbuild divided by an undisclosed number of contract days plus daily OPEX, overhead costs, and a “moderate” cost escalation.

The second eight years will have dayrates set by a “Pricing Mechanism” which will likely force dayrates to be more competitive.

What’s interesting about ARO’s newbuild plans is that they give some insight into Aramco’s idea of dayrates in the future.  Although it’s anyone’s guess, if we make some very rough assumptions, we can try to predict the rates these rigs will be working at and which rates, therefore, will set the market in Saudi.

We take $220 million as the build cost (including shipyard cost, supervision, and operating equipment) for each rig and amortize this over 16 years with the first eight years weighted more than the second eight years.  Then we estimate daily OPEX at $65,000, daily overhead at $5,000, and apply a 3% cost escalation on OPEX and overhead starting with year two.

For reference, average dayrates in Saudi Arabia are now around $104,000.

There are two implications of this exercise.  One, rates in Saudi Arabia will likely stay at the top end of the market.  Rig owners who have low financing costs will be able to be competitive.  Two, when ARO dayrates become subject to the Pricing Mechanism, they could get squeezed further on operating margins.

It’ll be interesting to see how this ends up working.

Look to other markets

Although Saudi Arabia is the place everyone wants to be, the effect of ARO Drilling’s growth will be offset, at least partially, by growth in other markets like the UAE (where ADNOC currently has a six-rig, four-year tender out) and Qatar, which is also expected to increase their rig count over the next few years.

Added to that, the real effects of ARO Drilling’s emergence won’t hit hard until after 2021 at the earliest, and by that time, scrapping of old rigs across the Middle East should balance out the increase in supply from the arrival of other (non-ARO) newbuild jackups into the region.

The situation isn’t dire yet, but rig owners will stay busy planning their Middle Eastern strategy and managing their efforts to stay in Saudi Arabia with their efforts to find opportunities elsewhere.  And they’ll have to decide how they’ll operate in a new environment where Saudi Arabia isn’t the largest jackup market anymore (for everyone except ARO).