Petrobras has been shedding rigs at an unprecedented rate over the last few years. Out of the 29 rigs they have on contract, they only have around 20 active and on full dayrate at any given time. But that doesn’t mean there’s no hope for rig owners.

For nearly a decade, Petrobras had more offshore drilling rigs under contract than any other operator in the world.  With ambitions to grow their late-cycle offshore oil discoveries into an empire that would fund the country for generations, Petrobras was one of the main drivers in the surge in deepwater rig construction (and a contributor to the oversupply of rigs the market is now left with).

If you were an offshore rig owner back in 2010–2014, Brazil was the land of opportunity.  Petrobras offered long term contracts with solid dayrates.  Everyone wanted to be there.  Rigs were built; demand seemed insatiable.

Petrobras even initiated Sete Brazil, a company with plans to build 29 Brazilian-content, deepwater semisubs and drillships, which was slated to be Brazil’s path to global prominence in rig construction and a boost to the country’s industry and economy.

Then came the oil price crash, a massive influx of newbuild deepwater rigs, and a corporate corruption scandal (Operation Carwash).  Petrobras was left with an extreme mandate to cut costs and reduce their rig count while Sete Brazil and its plan to build rigs imploded.

Since then, Petrobras has, by way of cancelling drilling contracts and scrapping new drilling programs, reduced the number of rigs they have on contract to 29. Now there are total of only 30 rigs (29 for Petrobras and one for another operator) working in Brazil, down 63% from the peak in 2013. 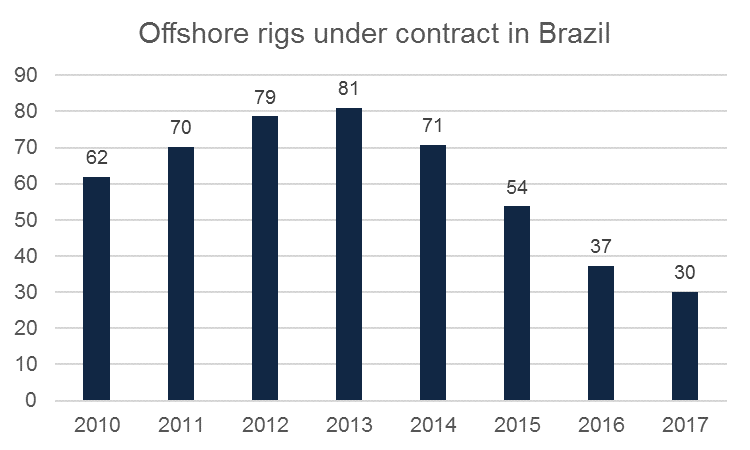 And further cut backs can be expected in the near term as drilling contracts come up for renewal.  Currently, Petrobras only needs around 20 of the 29 rigs they have under contract.

But more deepwater projects will be sanctioned

Fundamentals, however, are in Brazil’s favor.  New offshore drilling project investments by Petrobras and nearly all other oil companies around the world have fallen to historical lows.  As Schlumberger pointed out in a presentation in March, reserves are being depleted at rates nearing 20% in regions such as the US Gulf of Mexico and the North Sea.

Without investment, depletion rates will increase further.  Eventually, investment will have to be made in offshore projects to maintain a sufficient supply of oil.  Add this to the fact that oil companies continue to implement operational efficiency programs and the situation looks better for offshore projects – even in deepwater.

While deepwater’s recovery may not be hyperbolic, there is a future for it.  And Brazil will play a major role in the coming revival.  Once Petrobras returns to financial stability, they can be expected to become more active.  As they reach their target of 20 rigs during 2018, they will start adding them again.

Eight rigs will go off contract with Petrobras during the first half of 2018, and seven more will go during the second half of that year.  To maintain rig count, contracting activity must increase.  Some rigs will get contract extensions, but despite that, there will be opportunities for other rigs.

(Some) Sete rigs will be delivered, but not enough of them

While most of the 29 Sete rigs will never be built, up to six will likely end up delivered (two are already virtually complete).  The first of the Sete drillships, Arpoador, is about 95% complete at Jurong’s Aracruz yard in Brazil.  The second drillship hull is waiting to be mobilized from Singapore to Aracruz for final outfitting once the situation with Petrobras is clearer.

The first semisub, Urca, is also about 95% complete at the BrasFels shipyard in Angra dos Reis.  A second hull has been delivered from Singapore and is at the Brazilian yard with work on it currently suspended.  The quality, however, of the few rigs which have made it to the construction phase is high, and they will start to operate in the market over time.

Arpoador drillship at the Jurong Aracruz yard in Brazil

Although they are expensive, these rigs will likely have an advantage with Petrobras, but there are far fewer of them than originally planned which leaves room for others to come in.

International oil companies will play a role in Brazil’s recovery

But it’s not just Petrobras who will create rig demand in Brazil going forward.  As Petrobras has sold off assets, the emergence of international oil companies (IOCs) in Brazil such as Total, Statoil, Chevron, and Shell will drive new projects and investment.  Others, such as Exxon, are also looking closely at opportunities in the country.

The IOCs’ eventual development of their Brazilian deepwater assets will make up for a large portion of Petrobras’ recent downsizing.  Over time, we see the combination of a revitalized Petrobras and the IOCs contributing to high activity in Brazil after 2020. Although Brazil’s offshore market won’t return to its former scale anytime soon, it will be a key region in the deepwater market recovery going forward.